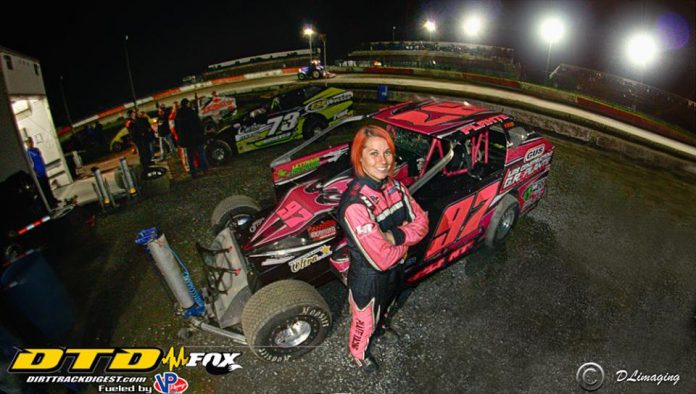 Josianne Plante a 24-year-old racer from Saint Hyacinthe Quebec, a small town east of Montreal, grew up in the heart of dirt track racing in Quebec. With Le RPM Speedway just a short drive from home, and Auto Drome Drummond and Granby less than 40 minutes away, she has no shortage of racing exposer.

With her father Rejean Plante racing on a weekly basis at their local dirt tracks from the day she was born, it was clear why Josianne acquired this love for racing. The unusual choice to begin racing on asphalt rather than dirt came about by the way of a gift while Josianne was at school. She received a pass to try out a kart at their local track. During the event, she had some great results along with an experience that would change her view about racing. This one event would lead her to begin kart racing in the spring of 2006 at the age of 12.

Twelve years later, the now twenty-four-year-old has long past her kart years and campaigns a 358 Modified at RPM and Autodrome Drummond, and subsequently was voted rooky of the year in 2017 at Granby and Drummond in the Modified class. This young driver learned the ups and downs of racing as she competed in the karting ranks, later moving on to the REVSTAR series and, in 2014, the ACT series on asphalt. In the last few years, she has been behind the wheel of her Sportsman Modified and is currently campaigning her number 97 car in the 358 Modified.

For all of these experiences, she has come away with a true passion to drive in competition.

Josianne has racked up a number of accomplishments along her journey and here are just samples of her achievements:

One of the most memorable moments was when Joisanne was asked to drive her brother’s car at the Big Block Super DIRTcar series at RPM Speedway in 2017. She had the third fastest time in her group time trials and would start the race in the fifth position. After 100 laps, Josianne would cross the finish line in 17th place — a great result going up against the best in the sport and one of the very few women to enter in to a Super DIRTcar series race.

Content at where she is today in her racing program, Josianne is a realist, recognizing her strengths and weaknesses in her racing program something most drivers will not come to terms with. On the other hand, she gives her all each and every time she straps into the car, racing as hard as she can for each and every position, striving for the win. She learned this trait by the many years of support from her parents Rejean and Sylvie who have encouraged her through all of her racing endeavors, no matter how hard the challenge.

For Josianne racing is a fun part of life and will be competing once again at her local tracks on a weekly bases soaking up every moment of the experience.