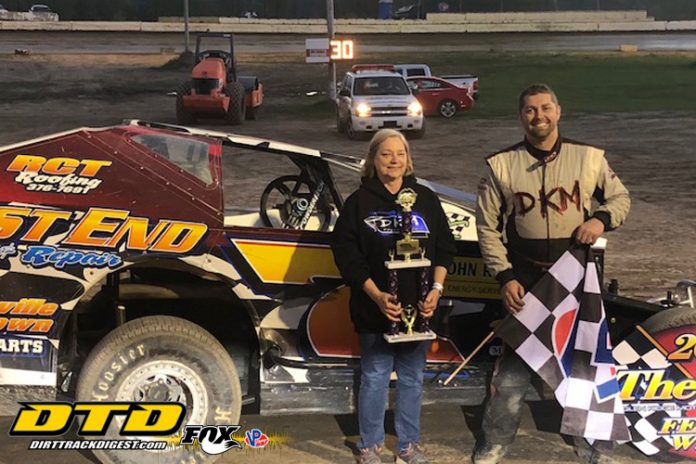 Tuesday evening we made the trip down the NYS Thruway to the historic Orange County Fair Speedway. We went with two things in mind, one to witness the fifth running of the Hard Clay Open and of course to see what improvements had been made so far at the facility after the changing of the guard at the nearly 100 year old oval. In such a short time you could see that Chris Larsen and his team have hit the ground running and that this is going to be something to see on completion. One major change is the new seating in the half covered grandstands and the addition of seating in the fourth turn. In speaking with Chris Larsen of Halmar International he said, “this is just the start and there is much more to come. With the money I’m putting into this, it must be for the love the this place.”

We have attended Orange County events many times over the years and have always thought how wonderful it would be if someone stepped up to bring the place back to the greatness it once had. It seems we are getting to see that, thanks to Chris Larsen.

We try to get to as many of Brett Deyo’s shows as possible. Originally scheduled for April 8th, the Hard Clay Open moved to May 8th and as always we can depend on an excellent field of racers, which has to relate to how well they are treated. With nearly 50 Mods and nearly 30 Sportsman we knew we were in for a great night of racing. One factor was the beautiful weather. Previous winners of the event were Andy Bachetti who won last year and in 2014, Stewart Friesen won in 2015 and Tommy Meier in 2016 were all on hand to defend. The track seemed in great shape as even the announcers mentioned there had been little need for a tow truck throughout the evening. Fans were please at how the show ran, the Mods took their parade lap at 9:15 pm. At the end of the 50-lap feature Stewart Friesen was in victory lane for the second time for the event taking home $5200 for his effort. We look forward to retuning to Orange County soon. Modified driver, Matt Depew is one of the regulars at Albany Saratoga and has been for many years, beginning his racing career in a Mini Stock before moving to Four Cylinders and Sportsman. He has predominately concentrated on the Malta oval because it is only 30 minutes from the family home in Argyle. Matt has raced other tracks like Fonda and Devil’s Bowl in Vermont and says it’s just speculation but he would like to get a DIRT legal motor and race the Vermont oval once more.

Matt’s crew is headed by his father, Scott who is also the car owner. Many teams may have numbers on the cars that have been passed down from earlier generations and the Depew No. 667 has an interesting story also. It seems that when Scott and his brothers began racing they had also just been to the Post Office to get a PO Box, you guessed it, No. 66 and that is where that number came from. The third digit came about from necessity when Matt started racing snow-cross he of course wanted to race the No. 66 but was told that there were so many competitors he would have to use a three-digit number so he added the 7. It’s pretty simple but there it is.

The Depew No. 667 Troyer chassis Modified is powered by a big block Mopar and according to Scott it is probably the only Chrysler powered big block Mod in the Northeast. Gary Nolin is the engine builder and the Depew Modified has shown its power on many occasions and Matt says they are gaining each week. The Depew’s are what they refer to as budget racers. We didn’t ask them what they meant by that but like many other teams that are at the local tracks each week they race within their budget. Scott said he would love to find a Mopar loyalist who would like to sponsor the team, so if there are any Mopar faithful out there see the Depew race team at Albany Saratoga on Friday nights.

The Depew No. 667 has had some veteran racers behind the wheel like Leon Gonyo, John Kollar, and C. D. Coville who Scott says had some wins over the years. It’s Matt that has been behind the wheel since he began racing and he visited victory lane at the Malta oval on July 17, 2015. Matt and Scott say they have a great crew that comes with them each week and they are just glad to be able to do what they love and be successful in competing with the best drivers in the Northeast that come to the track on Friday nights.

Peter Britten was the 2017 champion at Albany Saratoga driving the Andy Romano No. 97 adding to the firsts in the Australian’s career. Britten’s first championship in a dirt Modified and his first in the United States. It was also a first time championship for an Australian at the track. Peter said on his way to Albany Saratoga on Friday he thought about winning for Maynard Troyer who had passed away during the week. “He did much for the sport and brought about many changes,” said Britten. Peter finished fifth in the rain delayed feature on Friday, made a few changes to his Troyer chassis and came back to win the nights main event and dedicated the win to Maynard Troyer. Peter Britten has eight wins and 36 top fives in his five years of competition at the Great Race Place. Britten went on to win on Saturday at the Land of Legends formerly Canandaigua. Sunday night Glen Ridge was back in action and first time winner in the Limited Sportsman division, Derrick McGrew, Jr. is pictured here with Crate Mod winner Dave Constantino. Mothers were prominent on Sunday with Dave’s mom Georgina coming to victory lane after his win.

Mother’s Day was being celebrated in the concession stand with mom, Cheryl Rosenbarker and her daughter Nixi who were working together on Sunday. Nixi said she had already given her mom flowers earlier in the day.

In closing we send our thoughts and prayers to the family of Maynard Troyer who passed away this week. Troyer was a driver and car builder who will long be remembered by Northeast Modified dirt track fans for the “Troyer Mud Bus”.