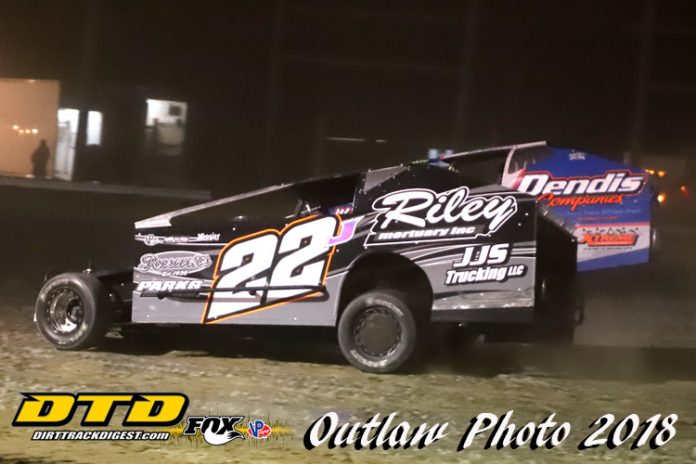 VERNON, NY – It was a virtual snap of a finger, .042 seconds. What can you do in .042 seconds? Blink?…that’s about it. The .042 will go down as one of the closest finishes in the storied Utica-Rome Speedway history.

By now you know Matt Sheppard visited his familiar spot of victory lane at the half-mile oval in Vernon, NY. The past few seasons, Superman and his corner has been boasting winner, winner chicken dinner more times that not when it comes to their Sunday night home.

By now you also know that the opener at Bill and Kim Shea’s facility was different in a few ways. One, it was their kick off of their new program highlighted by small-blocks and two, Sheppard’s victory was by that aforementioned .042 seconds over an upset minded Jeremy Wilder.

The Fort Plain, N.Y., chauffeur is a known name at Fonda and Albany-Saratoga where he’s roamed those tracks for years. In 2016 he darn near won the Fonda Speedway big-block championship. There is plenty of talent here, it just might not be that known a little more west in the Empire State.


Wilder drew pole, albeit with little reaction from the crowd, Sheppard drew outside, reaction was more or less, this race has just been decided by the same crowd. Well folks, that’s why we play the games!

The 100 lap DIRTcar Series event for the 358’s even some 24 hours later is still being talked about. The battle between Sheppard and Wilder was one for the ages. Sheppard did lead the most laps but when Wilder took advantage in some lapped traffic to take the lead mid-stages the line in the movie Rocky came to mind…”He doesn’t know it’s a damn show. He thinks it’s a damn fight!”

Indeed Wilder was throwing his best punches at the defending champ. “I know I had a good line and all those laps I ran behind him that’s what got me to the final few laps. I looked up and noticed it was lap 93 so I knew I had a shot,” said the upbeat driver. “You had to be careful, not show your nose and then complete the pass, you had to do it all at one time.”

Wilder went on, “He’s won a lot of races and if you show a nose he’s going to change something. That’s what I didn’t want to do, to give him a chance to get back around me.”

With the plan is place, Wilder’s family owned No. 22 waited to the final corner of the final lap.

“I didn’t really want to wait to the last lap but that was the only chance I had at it,” continued Wilder. “I just had such a good run on the outside, the car stuck pretty good and I thought I had a shot at it.”

When the two cars came down the front stretch side-by-side there wasn’t a fan using their fanny. They ALL were on their feet. When they shot under the checkered flag there is a myriad of emotions. However, there was one constant and that was letting out a proverbial “oh my god, did you see that!”

That was for good reason, .042 seconds of a reason. Wilder wasn’t a man that hung his head, yes you can say “losing” to one of the best can get you down, but this was a driver where his cup is half full. He had a good time!

“I had a great time, yea we come up a little short, it was a good show for the fans and I had a blast,” he said with a genuine smile. “The track wasn’t ideal but we all had to race on it and I think that was part of the thrill. You had to be on it and it made things interesting”

When the Utica-Rome brass decided to take the 358 dive along with the Futon Speedway, many unknowns were taking place. But, the change caught Wilder’s eye. “I think the small-blocks level out the playing field a lot. What they are doing here keeps the low budget guys competitive,” he went on about the 2018 change. “We aren’t a top dollar team but we aren’t a super low budget team either. We have good equipment and it’s a great opportunity for us.

“We are able to come out here, have a chance to run strong and run with the top guys,” Jeremy went on about the plan.   “It’s still a lot of racing, three nights a week with us running Malta (Albany-Saratoga), Fonda and here. I like to start out running here weekly as there’s a lot of 358 stuff around and I want to run them so we don’t get behind the eight ball.

“We are going to do the best we can, the up keep on a 358 car is still a lot of work and it’s just a hobby for us,” said Wilder.  “It’s going to be a time thing and if we don’t make it the whole season, it was just a matter of time.”

After Wilder talked about his incredible run and his plans for the season, the conversation was quickly turned to his DKM Cyclone Chassis that he was using. While still a relatively new comer in the modified chassis building business, DKM has been making some serious noise with their main driver Stewart Friesen.

The cars are brain storms of Dave Constantino, Kyle Hoffman and Eric Mack with Friesen providing a wealth of knowledge. All that is coming to fruit as Friesen is racking up unheard of stats at tracks from New York to Delaware. Wilder is happy to be aboard this train as well.

“We ran about five or six races on this car last year, it handled really good. We actually had a fifth place finish here (Utica-Rome) last season so that was good,” Wilder continued.  “It’s all working out for us. There’s a lot of big-block stuff out there but I’ve known Dave and Kyle for a long time. I like to think I am helping them out by running the car (small-block) but in return they are just helping me a lot. It works out good for all of us and we all hope to get more cars on the race track.”

When this writer turned off the recorder you knew that Jeremy Wilder “gets it” and this is a driver that could very well make headlines in the 2018 season. Hey, it still might be .042 seconds of a headline but when you look back as time passes it’s not going to be a bad one to remember.