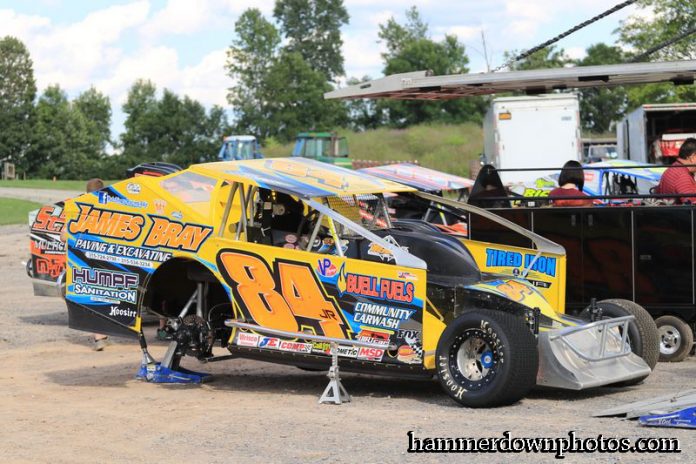 The plan for this past weekend was for Afton Motorsports Park (A.M.P.) Friday, Thunder Mountain Speedway on Saturday and to round out the weekend at the Utica-Rome Speedway. As it turned out I got two out of the three in the books with the Saturday event being rained out early in the day. I will tell all you fine folks about some things at these two other tracks I visited and also a couple of big events coming up at my home track Thunder Mountain. I will also end this piece with an opinion on an issue at local tracks that track promoters are starting to take action about to some degree. Before getting started though I want to send out a Happy Mother’s Day to all the Mom’s out there and yes I know it is late but I didn’t write anything before that time. Sorry for being late but I write it with true sincerity.

Friday at A.M.P. was the twice postponed opening night for the 2018-racing-season and anticipation for the event was running high. The return of the IMCA Modified division was one thing of interest. Anticipation of higher car counts in all divisions and how was the new surface going to work out after many questions after the first two test and tune sessions.

Return of IMCA: The track had this division off their schedule in the previous race season and this season track promoter Ron Ford decided to bring the division back after many requests to do so. Friday saw eight competitors make their way to the track with seven actually competing. Outlaw Speedway was running a Series race which most people didn’t know the IMCA folks were running any this year. I saw it posted on Facebook and is the only way I knew about it. The Wards, Bill and Will the Father and Son racers out of the Cobleskill, N.Y., area went to the series event so this week might tell the story on rather it will materialize as a good decision or not.

Counts of Cars: The car count was up in the Modified with twenty-five coming to compete with new competitors and one returning after a year away. The Crate Sportsman was at nineteen and that was around the same as last years opener but above the overall average of last year. The Open Sportsman at seventeen was near the same with new ones to replace some that were either not ready yet or moved up. The Street Stock division saw the biggest rise from an average of six-eight to fourteen on this night. Finally the Four Cylinder Truck division at nine is also slightly above last years average.


Track Conditions: Unfortunately with the wet spring the track came up some what challenging to say the least. The track crew has put many hours in trying to make the new surface bind with the old and between the make up of that new stuff and the wet weather it has been a very difficult task. I saw that in the best interest to the racers Mr. Ford and his track crew has removed the new surface and will have the track back to last year which was smooth, fast but just slightly abrasive. I am positive that will work out for them because the other wasn’t going to for awhile. I do believe they would have got the new surface smooth once it dried out well but the the dust spray off the rear tires to the competitors behind them would have still been tough to overcome in my opinion.

Afton Afterthoughts: Racing in general was close as it definitely was hard to get by at times but all the drivers made the best of it. The Modified feature with Mike Mahaney driving the Olum’s sponsored 21 made the bold inside move on defending track champion Andy Bachetti in the Garrity Asphalt Reclaiming 4 to grab the win with two to go. Bachetti left the inside open enough going into one on a restart and Mahaney took full advantage of it. Bachetti showed his displeasure after the race and banged the back of the 21. Bachetti and most any other racer going for the win would have made the same move especially with track conditions.

Claude Hutchings Jr., showed that he was going to be tough to unseat as the Open Sportsman champion with the feature win. In the Crate Sportsman winner is a newcomer as a regular this season and showed everyone that he means business as Corey Cormier in his Interstate Batteries number 20 motored to the feature win. In the Street Stock division Butch Green piloting the Jack Holcomb 57 was at the right place at the right time as the top two competitors tangled with each other in turn two and Green cruised to the win. Ralph Cuozzo was back in victory lane as he became the first winner in the Truck division. Finally IMCA feature winner was James Cornell J3 as he has not missed a beat since the year off at the track.

The feature only for divisions with less than 12 with six divisions I believe is a good thing. Some folks asked me about why the IMCA division didn’t do it this week and I told them IMCA with their sanctioning has a rule that you must run a heat. I could be wrong but I believe that to be correct.

On Mother’s Day Sunday I made my way to the three timed postponed season opener at the Utica-Rome Speedway right off Route 5 in Vernon, N.Y. The day of racing was featuring the the New Yorker 100 for the 358 Modified division under the DIRTcar banner. The Crate Sportsman, Pro Stock and Rookie Sportsman rounded out the card. I was anxious to see what was new at the speedway from prior years and on the way up I decided I was going to do something really different and I will write about that in a few.

Changes Galore: Coming into the spectator gate is a change I didn’t expect to see as Randy Mallett was working that gate and he was very pleasant with the folks as I stood off to the side for awhile to watch. There is no one person selling photo’s this season at the track as photographers submit photo’s to the track. I don’t know all the details but time will tell if that is a good idea or not. Also new was paying at the concession right where you get your food or drink which I like. I hate waiting in lines and the other way you sometimes had to wait in two lines.

On track action is seeing the biggest changes as the big-block Modified division is switched with know the DIRTcar 358 division as the headline division. Scott Hixon is know the official head flagger at the speedway and he works alone on the stand. For now anyway as I forgot to ask the track maintenance is being headed up by Jeremie Corcoran and I believe that will work out. On this day the track definitely came up a little dry in my honest opinion. It did make for some close racing and the last twenty-five laps of the 358 event was a doozie for sure.

Diversity at its Best: Here is what I thought I would do for this event as I figured there would definitely be more 358 racers in attendance on this day then there were Modified cars last year. The count did come in at 34 with what I am sure was a few extra because of the race being the New Yorker. I believe most will be regulars and I am also sure that some that plan on racing there were not out yet. Here is what I thought was interesting and I realize that it being a Sunday track it can lead to what I am about to tell you. Between all the classes I came up with drivers who will be racing as a regular at sixteen different race tracks here in the Northeast. Here is my list for sure and maybe I missed one. Here they are in alphabetical order; Accord, Afton, Airborne, Albany Saratoga, Big Diamond, Brewerton, Can Am, Five Mile Point, Fonda, Fulton, Land of Legends, Merrittville, Mohawk, Outlaw, Thunder Mountain and I am sure some that will just be a regular at Utica-Rome Speedway. WOW!

Coming up this Saturday night at the Thunder Mountain Speedway will be the Lucas Oil Empire Super Sprints (ESS) organization. Added will also be the NY6A Sprints a much smaller version but a double dose of Sprint Car action. Another big event coming up on the Mountain in just a short twelve days of this writing on Sunday May 27 is the Lightning on the Mountain. It will be race number two of the Bob Hilbert Sportswear Fueled by Sunoco Halmar International North Series race for the Short Track Super Series (STSS). It is always a great stop on the tour and it adds to the Saturday card as some folks come in to get a reading on the track for Sunday. You won’t want to miss it.

Finally a hot topic at some tracks and some promoters and especially video folks are discussing is all the folks that are going live at the track with their cell phones. I my honest opinion to go live with a whole event is really hurting racing as some folks will not come as they know their buddy in going live with the event. Tracks also have deals with established businesses to broadcast the event but they share in some of that revenue. A driver that wants someone to tape just them so they can look back at what they did or didn’t do I don’t have a problem with. It is very tough in this day and age for tracks to survive so please let’s try to help them out and stop doing an entire race program’s feature event.