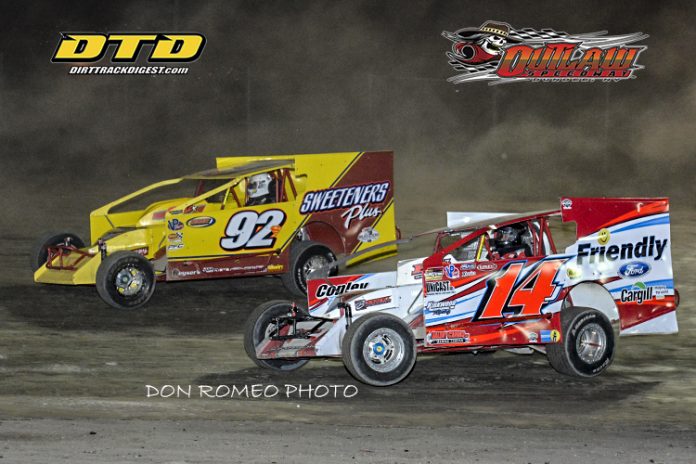 Matt Sheppard won 41 races in the 2017 racing season and so far in 2018 he’s on track to win even more in 2018. The Waterloo, N.Y., driver picked up his fourth win of the season in four tries on Friday night at the Outlaw Speedway. He now has a total of eight triumphs on the year and its only midway through the month of May and the Super DIRTcar Series has yet to run a full point event.

Sheppard started the feature from the 12th position with his No. 92 Bicknell mount and it took him 28 of the 30 laps to get to top spot. Sheppard had to race down an upstart Brady Fultz who had nearly a straightaway lead by the time he got into second.

The top proved to the be the difference as Sheppard was running the car deep into the corner then sliding up to catch the cushion coming off of the second turn. In turns three and four he was hunkered down right on the bottom of the racing surface. Having the ability to go to the top made all the difference.


“I could keep it nice and straight all the way up to the little bit of moisture up on the top side,” cited Sheppard. “I’d catch that and then get pointed down the straightaway. It was a little bit of a unique line for this place, but when it comes to dirt racing you never know where the traction is going to be so you got to do what you got to do.”

It has been a rocky start for Fultz at the Outlaw Speedway in 2018. The last two weeks he’s found himself on the business of the wrecker. Finishing second on Friday night might as well been a win for the 30-year-old Dundee, N.Y., driver. He lost to the best.

“It is a relief after the last few weeks,” said Fultz afterwards. “We haven’t been able to finish a race yet this season. To get a second place, and get beat by Matt, it’s kind of like a win for us so we’ll take it.”

In addition to the smiles in the pits afterwards, the second place effort also helps lift the confidence Fultz and the entire team.

“When you have bad finishes it gets your confidence down,” stated Fultz. “This is definitely a big confidence booster. It is something to work on. We tried a couple different things tonight and it appeared to work. It’s all good.” Fultz had his No. 70 was glued to the bottom throughout the feature. He battled early on with Greg Birosh who actually took the lead on lap four before Fultz when back by on lap 10. From that point he led until Sheppard went by on the outside with only two laps to go.

“There was quite of bit of bite there right around the bottom,” mentioned Fultz. “I wasn’t getting off it. I felt comfortable there. Once I got a little bit of tire heat I was able to gain right back on him (Birosh). I was charging, running harder and pretty soon I got back by him and he went away. With a few laps to go Matt finally rolled me on the top. I wasn’t even going to bother trying to race him. I was just happy to get a second.”

Marcus Dinkins went for a wild ride in the heat race getting up on top of the frontstretch wall. Dinkins road the wall halfway down the straightaway into turn one before coming to a stop. He was lucky not to get upside down…

Ron Cartwright failed to finish his heat and did not start the main-event.