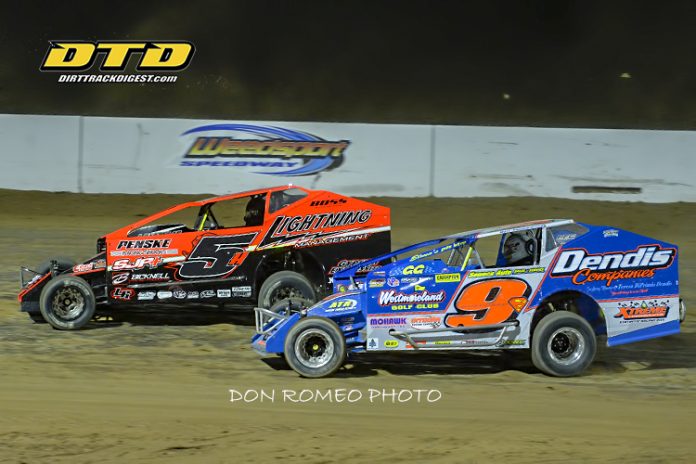 When the 2017 season ended it was a career year for Waterloo, N.Y., driver Matt Sheppard. He amassed more wins last year than any other Modified driver. He won multiple titles including the Super DIRTcar Series championship while sweeping the small and big-block portion of Super DIRT Week. With the pace he set last year it was going to be tough to replicate in 2018. Or is it?

Sunday night at the Weedsport Speedway it didn’t look like it was going to be Sheppard’s night. Sheppard struggled in his heat race barely sneaking by to make the Ice Breaker 50 with a fifth place finish in his heat. That put him 20th in the starting line-up. With the quality of cars in the pits it was going to be a difficult task to score another win. Even with the odds seemingly stacked against him Sheppard showed just how good things are rolling for the No. 9s team right now as he worked his way forward for the $3,000 win.

“We were just garbage in the heat race,” cited Sheppard. “I don’t really know why but we were terrible. We sat in the trailer and scratched our heads until about feature time. We threw a couple a things at it. The longer the race went the better it got. I guess we made the right calls tonight.”

Sheppard’s advantage on Sunday night was his ability to roll the inner lane on the speedway. With Chris Hile leading and pounding the cushion, Sheppard hugged the inner guardrail with his Bicknell. His left front was inches off the inside retaining wall. That lane was the differences maker as it seemed the longer the race went, less and less people were able to keep their cars low.


“There was tons of bite off the corners but it was a matter of staying in the bite through the middle of the corners so you could get to the exit faster,” he said. “It seemed like the more the track slicked off the more the guys would slide off the bottom and the better we got. Our car was just sticking the bottom really good tonight. I didn’t think it was going to get slick tonight or fast enough, but when it did this thing came alive.”

Sheppard was patient yet aggressive when necessary en route to his ninth win of the year. There were several occasions where it took him multiple attempts to get up alongside of someone to finally complete a pass. At times he backed off and had to regroup while on other occasions he showed his nose as quickly as possible.

“If you wait for a guy for 40 laps the race will be over,” mentioned Sheppard. “I backed out 10 times on a couple of guys. I waited until I could get all the way up in there. You don’t like to make contact but if you can get all the way up in there at least you are going to bump wheel to wheel. It’s kind of no harm, no foul. It’s a bullring. When you start 20th and have to get to the front you have to race hard.”

The scary thing for the competition at this point is Sheppard has been experimenting throughout the opening few months trying to find what works and what doesn’t. He’s been trying the coil car versus the standard bar car. They’ve settled on a plan. On Sunday he went back to the basics. Although he still doesn’t feel completely comfortable as he hasn’t been able to get in a rhythm yet with Mother Nature wreaking havoc on weekly racing for much of the year

“It would be nice if Mother Nature would cooperate a little bit more and we could get some more racing going,” stated Sheppard. “It’s been kind of tough for us actually. With all the rain-outs and really only running my own car on Saturday nights and the series, we haven’t had any series races. I’ve only run my own car four or five times. It’s tough to get rolling or learn anything. Hopefully as the summer wears on here we can keep on trucking.”

Chris Hile was only a handful of laps from pulling the upset on Sunday night at Weedsport. The Syracuse, N.Y., native rolled the high-side of the speedway to secure the lead on lap 33 as he drove by Jimmy Phelps on the outside of turns three and four. While others were skating through the middle Hile took advantage of the moisture on the top to get to the front from his 10th starting spot.

“We were a one lane car,” said Hile. “We were really good on the top. Early in the race I kind of followed the top five and rolled the bottom. I wasn’t gaining on them. I decided to move around a little bit and I found a really nice lane around the topside of turns three and four. That last restart there I rolled the top of turns one and two and found a nice line off of two so I stuck with it. We were really good up there in a clear track.”

Hile looked like he was going to drive away for the win. Unfortunately traffic proved to be difficult for him. He just couldn’t get out of the top lane to pick his way through the slower cars. That impeded his progress opening the door for Sheppard to close in.

“When we got to traffic my car wasn’t maneuverable enough to do what we needed to do to get through,” commented Hile. “Off of four I was counting the laps down. I knew if there was one guy lurking it was going to be the 9s.”

Sheppard poked the nose under him with on lap 44. Hile tried to protect the bottom through turns one and two the next lap but he couldn’t keep the car in the groove allowing Sheppard to power by.

“He (Sheppard) was so much better than me on the bottom,” stated Hile. “I needed to keep the momentum for the car to stay with the track like we needed it to. Fortunately for us we got some lucky bounces early on and got some easy positions. We had a good car to roll the top, I just wish I could done more through traffic and we might have had a win.”

Phelps Lucky to Hang On

For the first half of the race Jimmy Phelps had the dominant piece. The Baldwinsville, N.Y., driver and Weedsport Speedway promoter had a rocket underneath him. Sadly for the HBR team it didn’t last as Phelps had a severe mechanical issue derail his chances for the win.

“I had an excellent car,” cited Phelps. “I don’t know if we caught a rut wrong or what, but the panhard bar ended up breaking right out of the frame. When it did the rearend came over and knocked the fitting off the brake caliper so I didn’t have any brakes. The car was wounded pretty good. Honestly if the yellow had come out I would have stopped and probably been pushed in because I couldn’t stop. Fortunately we had enough track position where I could stay in the middle and keep my speed up to try and maintain a good finish.”

With his third, Phelps continues to chase his first win of the season. He’s been consistent all season placing on the podium on multiple occasions. The luck just hasn’t played out in his favor.

“It’s just shame,” he said. “I felt like we had a dominant car there for the first half of the race. It is what it is. I had a really good car all night long. We’ve had a good car all year. I’m excited about that. It just seems like we’ve been hovering around that top three. I think we’ve had a car that can win. We just aren’t there. Obviously that’s frustrating. Then to lead a bunch of laps and have it slip away is disappointing. We’ll get up tomorrow and be excited that our car is really fast and we have a lot of season to go.”

42 cars attempted to qualify for Sunday’s Ice breaker 50 in preparation for the Heroes Remembered 100 coming up on Memorial Day, May 27…

Ray Graham made his dirt racing debut hitting the track for hot laps.  He did not return the rest of the night.  His regular driver Peter Britten struggled in his heat before missing the feature by one spot in the consolation…

Chad Phelps’ car was severely damaged after he broke the front end causing his car to dive into the end of the barrier entering turn one. After bouncing back out onto the track he was hit by Billy Whittaker. Whittaker had no place to go. His car was also heavily wrecked in the incident…

Hulisizer’s heat race win was the high point of his day. Hulsizer found himself hopping Ryan Arbuthnot’s wheel off the exit of turn two. His car slammed the backstretch wall on the opening lap damaging the front and rear of his No. 55…

Weedsport Speedway kicks off the Super DIRTcar Series next Monday with the Heroes Remembered 100.