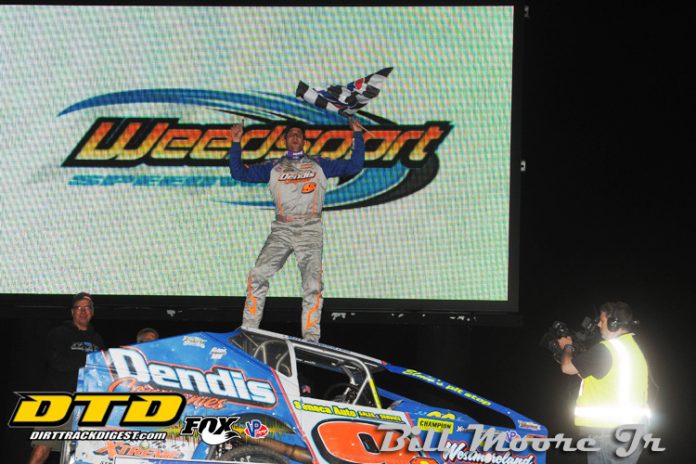 I’ve missed the opportunity to write a weekly column because I’ve been so busy working what seems like three full-time jobs. I was able to make the season opener at Brewerton Speedway on Friday. I see a continuous push to improve seating by replacing the wood plank bleacher seats with aluminum. The track surface was a polar opposite from last year’s opener. On Friday the track was smooth and had some grip that lasted through the heat races.

Another thing I noticed was the younger drivers that have come into the sport with a deep passion for winning. The Sportsman division is filled with teenagers that can wheel a racecar to victory lane against the best veterans if given the chance.

The support divisions that Modified fans often ignore put on some of the best shows in racing if you pay attention. The Mod-Lites at Brewerton are one such class.

While noting simple observations I have to include that three out of the top four Modifieds in the feature were running LJL Kevlar motors. The fact that LJL Motorsports owns the in-house motor shop didn’t prevent Willy Decker (Sr.) from dominating his heat race running one of their motors in a ride owned by a non-LJL related team. That shows you that they put as much effort into a customer’s motors as they would their own team motors.


Every feature was entertaining from this race fan’s perspective. The race for the top four in the Modified feature was really fun to watch. I believe that in the big-block ranks at Brewerton anyone could win under the right circumstances. If the track stays that smooth all year we’re going to see some fantastic battles.

The Saturday rain-out at Fulton gave me a much needed rest while I prepared my sermon notes for Sunday morning. I took full advantage of the quiet afternoon to check my eyelids for holes in between some entertaining media breaks on YouTube.

Sunday I was torn between two tracks. Utica-Rome Speedway has been my Sunday place of races for 20 race seasons. Weedsport Speedway has also adopted me as their Chaplain when they open, so I had a tough decision to make. Watching the forecasts while praying I asked the Lord for guidance which direction to drive to the track of His choice. He made it easy by the unfortunate rain-out call the Utica-Rome managers had to make.

The pits at Weedsport were packed for the Ice Breaker 50 season opener. The clouds dispersed to create a beautifully sunny afternoon. The new clay they put down is a major improvement to the surface people have been used to seeing. Even with the 800 HP ground pounding DIRTcar Modifieds it held up pretty well. A few touch ups as the season ensues will create another smooth racy surface for the Central New York race scene.

Every improvement Weedsport Speedway makes sets a new trend and raises the bar for others tracks to aspire to. It is truly a fan friendly gem in the dirt racing scene.

One of the most rare things I’ve ever seen at any event was Matt Sheppard going backward from his starting spot. Matt’s car had a major issue in his heat race which caused him to slip backward from the front row to fifth place. This made him have to work extra hard to prepare his car for the 50 lap main. He seemed more like the Matt we’ve grown accustomed to as he paced his march from 20th on the grid at the drop of the green to win the 50 lapper. That’s the “Super Matt Sheppard” I’ve watched grow up behind the wheel.

There are some great additions to the shows at Brewerton, Fulton, and Utica-Rome this weekend for our nation’s Memorial Day celebration. Weedsport also has a great event scheduled on Monday so it looks like God willing and weather providing I’ll be at four different race tracks with many of you.

Memorial Day is a national holiday, but the significance for many has been lost to the passage of time. The original intent was to honor soldiers that lost their lives defending the republic of the United States of America during the American civil war.

Without knowing the history, the sacred symbolism has been tossed aside for an excuse to barbeque and party. I personally believe that those ardent patriots set an example to love our nation enough to defend her Constitution from tyranny that opposes her from outside and within.

This holiday was the idea of General John A. Logan, the leader of the Civil War Veteran’s Association during the years immediately following the Civil War. Originally known as Decoration Day, it was first celebrated on May 30th 1868 in Waterloo, New York. It was on this day so many years ago that speeches were made and soldier’s graves were decorated. By the 1890’s most of the northern states were celebrating Decoration Day.

The the idea for the poppies displayed, sold, and worn by veterans and veterans association’s came from the poem “In Flander’s Fields” by Canadian physician Lieutenant-Colonel John McCrea on May 3, 1915 during the first world war.

“In Flanders fields the poppies blow
Between the crosses, row on row,
That mark our place, and in the sky,
The larks, still bravely singing, fly,
Scarce heard amid the guns below.

We are the dead; short days ago
We lived, felt dawn, saw sunset glow,
Loved and were loved, and now we lie
In Flanders fields.

Take up our quarrel with the foe!
To you from failing hands we throw
The torch; be yours to hold it high!
If ye break faith with us who die
We shall not sleep, though poppies grow
In Flanders fields.”

In racing, 101 Indianapolis 500’s have been run on Memorial Day. This year marks the 102nd running of that iconic race.

This year, as we enjoy a weekend of racing all over the country be sure to pause for the cause. Take one minute at 3PM Monday to soberly remember each and every life that was sacrificed in order for us to stand freely in the liberties those sacrifices provided. It’s a federal l law after all. At the very least, the fallen patriots deserve to be honored for their bravery.

It’s important to pass our nation’s history to the next generations to keep a constant reminder of the cost of our freedom. When Moses was giving the nation of Israel instructions before they took possession of the promised land he spoke these simple yet profound words that resonate deeply in my heart for our republic, the United States of America:

“Surely I have taught you statutes and judgments, just as the Lord my God commanded me, that you should act according to them in the land which you go to possess. “For what great nation is there that has God so near to it, as the Lord our God is to us, for whatever reason we may call upon Him? And what great nation is there that has such statutes and righteous judgments as are in all this law which I set before you this day? Only take heed to yourself, and diligently keep yourself, lest you forget the things your eyes have seen, and lest they depart from your heart all the days of your life. And teach them to your children and your grandchildren, Deuteronomy 4:5‭, ‬7‭-‬9 NKJV”

Everyone have a great week. I’ll see you at the races this weekend. If you need to contact me I can be reached on Facebook at Finish Line Chaplain, Kevin Westcott Ministries, or by email at flchaplain@windstream.net