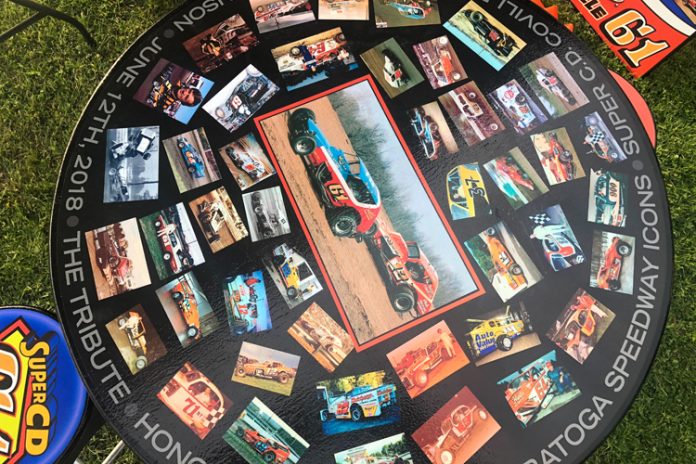 As we walked into Albany-Saratoga on Friday night we saw John and Paul Lakata under “The Tribute” tent selling laps and tickets for prizes to be awarded on June 12th when Albany Saratoga honors two icons of the sport and the track. “Super” C. D. Coville and “Jumpin” Jack Johnson will be honored with a 61-lap race for Modifieds paying $6100 to win.

John and Paul will be working on the awards for this event the next few weeks. Along with the winning prize money there is also lap money. Laps are being sold for all 61 laps with money going to driver in positions 6 or 12. So far some laps will pay up to $100 to the driver running in those positions. Other race awards on the board: Longest Haul Awards, $150 from TIMCO Transportation Inc., and LONGHORN Trucking going to two race teams that do not qualify for the main event. Ginny Neff Memorial Hard Charger Award plus $150, top finishing small block, $100; top finishing Troyer and Bicknell cars will receive a $100 Andy’s Speed gift card and according to Lakata’s there is more to come. Just a few of the prizes so far are a Pub Table with four stools, Cornhole Boards with bags, racing tee shirts and driver tee shirts. There is also one of those famous Paul Lakata posters that will be for sale, and the best news is that C. D. will be autographing them.

As we get older we reminisce about some of the places we’ve been, the drivers and people we’ve met and on Friday we sat at Albany-Saratoga remembering the first time we were there, our first date in 1977 and how we remember a young Hobby Stock driver, Kim Duell and a very excited, screaming fan in the stands when he was on the track. Kim began his career in the Hobby division at the Malta oval in 1976 before moving up to the 358-Modified division in 1984 when then promoter, C. J. Richards began the CVRA division to help the drivers at his tracks curb the expense of racing. Kim who always wanted to race a Modified took advantage of the new division and says it gave him the opportunity to fulfill his dream and race with the likes of Jack Johnson, Harry Peek, Lou Lazzaro and C. D. Coville. After racing in the 358 Mod division for a few years Kim moved to the Dirt Pro Stocks where he is now and says he loves it. He says, “As long as I’m competitive and can get in and out of the car, I will be here.” Kim still gets excited each Friday morning as he rises at 4 am, gets the car loaded and hauls it to his job at Curtis Lumber so he can leave straight from work and head to the track. Kim has had many successes in his racing and one that we recall most recent was this past Fall at Oswego when he was running second to Rob Yetman at the Super DIRT Week Pro Stock event and on a restart he took the lead but was put back for what was deemed jumping the start and Rob Yetman went on to win the event. This season Kim says he will race at Albany Saratoga, follow the KOD Series and hit a few DIRTcar events. Part of reminiscing is looking through old photos and here is one of Kim Duell from our collection and one from Friday night at Malta.


Keith Flach probably wishes the season at Albany-Saratoga had started this past Friday. Keith has had a tough start to his season at the track with one top ten finish in his first three outings. On Friday he held off a strong field of Modifieds to bring home his first feature win of the 2018 season. In victory lane he celebrated with his family and thanked the crew for all their hard work. Hopefully this will turn his season around.

Once again racing in our area was drowned out by rain and we decided to make the trip to Mechanicville where we attended movie night at the Elks Club and what an inspiring night it was. We learned of the night from racers Jim and Justine Duncan who organized the event to collect money for homeless women veterans. The movie “Served Like a Girl” was shown to a large group of attendees and many prizes were raffled off to benefit Final Salute Inc. a national organization whose mission is to provide safe affordable housing for women veterans of which there are an estimated 55,000 in the United States. The movie is available from many sources and is a must see documentary. Alan Johnson won at the Land of Legends (formerly Canandaigua) on Saturday night the place where he recorded his first career win 43 years ago on May 3, 1975. A. J. Slideways has 549 career wins at 41 different tracks.

During the week you can find Denny Tilison at the business he runs with wife, Debbie, Race Printing and Packaging in Cobleskill. On Saturday night he can be found at his command post in the tower as Race Director at Fonda and on Sunday night Denny holds the same position in the tower at Glen Ridge Motorsports Park. Denny has been one that was able to transition from competitor to official first as a flagger and now race director at both tracks while gaining the respect of the racers he oversees. Denny was a driver for years in Pro Stocks, Street Stocks and Slingshots.

Before we close we want to give our thoughts on the actions of one driver at Albany-Saratoga on Friday. No need to mention names, if you were there you saw the driver stop at the flag stand and what transpired after that. Something that we feel is unbecoming to our sport. Just remember in today’s world, that along with track video everyone has a camera on their cell phone so act accordingly, potential sponsors may be watching.

In closing we send our condolences to the family of Fonda Speedway Hall of Fame member, Edward “Doc” Blanchard who passed away on May 12th at the age of 88.