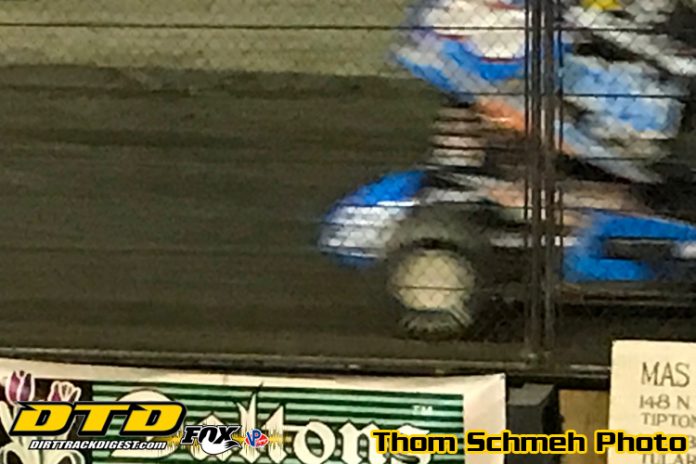 This past week I took Amtrak from Syracuse, New York, to Sacramento, California, to meet up with friends Kerry and Sheila Ross Fasig and head to the May 18-19 Peter Murphy Classic at the Thunderbowl Raceway in Tulare, Calif. Kerry Fasig wrenches for the Mike Phulps-owned No. 56 Sprint Car team, which variously fields non-winged and winged 360- and 410-cubic-inch sprint car entries on both pavement and dirt. Tony Hunt and Ryan Bernal have driven for the Phulps team in the past, amongst others, with a good deal of success. Kerry’s wife Sheila is the daughter of the late Walter T. Ross, a driver turned owner turned Northern Auto Racing Club (NARC) president back in the day. Peter Murphy is a Sprint Car driver who achieved a good deal of success in the United States, New Zealand and his native Australia. He suffered a career-ending injury in 2013 and has settled in America with his family. This event has been held annually since 2014 in his honor and he works tirelessly to make it successful for the fans, teams, sanctions, Thunderbowl promoter Steve Faria, and the NARC Benevolent Fund. Sadly, the third-mile banked Central Valley dirt track, which annually hosts the prestigious Trophy Cup race, ‘took rubber’ early on the first night and both features were rather lackluster.

**Did you know that Rick’s son Kyle Hirst won the inaugural SCCT point title in 2017 without winning one SCCT-sanctioned feature race? But he stood on the podium for eleven of the thirteen races by wheeling Dennis & Teresa Roth-owned cars. And 1996 NARC champion Rick Hirst’s step-dad was point titlist Joe Hill of West Capital Raceway (1978) and Placerville Speedway (1982-83).**

On Saturday, May 19, the headline division was the 34-car winged 410 c.i. King of the West Series (KWS)/NARC sprint car division, with the now-20-car non-winged USAC West Coast Sprint Car Series being the preliminary card. The ‘Legends of Kearney Bowl’ also provided vintage exhibitions each night.

Richard Vander Weerd won the 30-lap, $4,000-to-win main event over runner-up Ryan Bernal, Tristan Guardino, Austin Liggett and Jace Vander Weerd, respectively. Others of note were Danny Faria, Jr., in seventh, Troy Rutherford in ninth, Shannon McQueen in tenth, Brody Roa in the Mike Phulps #56 (sans wing) in fourteenth, and Colby Copeland in fifteenth. This finish was delayed when an auto accident (with a utility pole) in Tulare caused a power outage at the track. Shane Golobic passed Kyle Hirst and “Bud” Kaeding on the final restart (caused by a controversial yellow flag on the final turn of the original final lap) to win $11,000 in the 30-lapper over Kaeding, Hirst, Willie Croft and Tim Kaeding. Others of interest to me were Jason Solwold in sixth, Gio Scelzi in seventh, D.J. Netto in ninth, two-time World of Outlaws (WoO) champion Jason Meyers in tenth, Colby Copeland in eleventh, Tanner Thorson in Clyde Lamar’s #3c in twelfth, Dustin Golobic in fifteenth, Dominic Scelzi in nineteenth, Bobby McMahan in 21st, and Max and Melinda’s son Matt Dumesny in 22nd. Amongst the DNQ’s were Nathan Rolfe, Chelsea Blevins, Jenna Frazier, and Cole Danell.

While I enjoyed my personal track-visited #385, even the “Fresno Bee” reported, “Dirt tracks usually have lively passing in the turns as drivers pitch their cars sideways, allowing the right-rear tire to gain bite on the banking. But over two days of racing in the Murphy the action was mostly follow-the-leader.” **Did you know that Tulare, in the heart of the agriculture-rich Central Valley, is home to the World Ag Expo each February at the International Agri-Center? Also, despite being known as the Dairy State, Wisconsin is ranked second to California in milk production. And Tulare County, with Thunderbowl Raceway located on it’s fairgrounds, is ranked number one county in the entire country for milk production.**