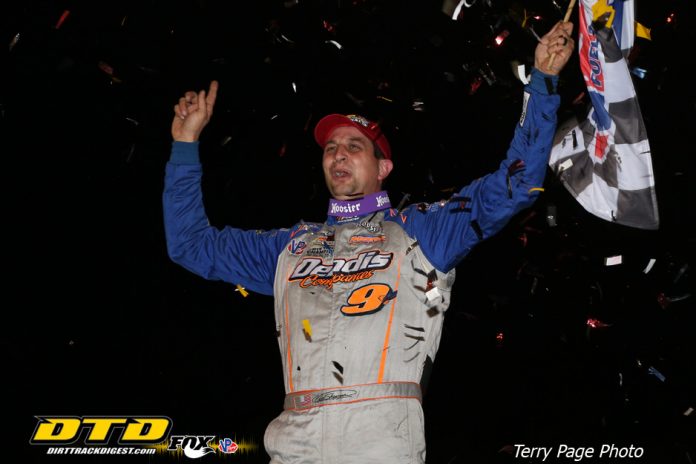 DELMAR, DE – If it seems like a broken record folks, it is! Matt Sheppard continues to live up to his Superman moniker once again in 2018. Sheppard and Ryan Watt hooked up in a crowd-pleasing battle midway through the 50-lap race after Sheppard allowed Watt to get by him on a lap 13 restart. However, Sheppard with two second place finishes in two races on the STSS tour was not to be denied on this night as he consistently worked the low groove until he was finally able to clear Watt for the lead on lap 28 and then it was see ya. Sheppard extended his lead lap by lap and eventually finished the race with an 11 second lead on the runner-up Watt.

The victory was Sheppard’s 10th victory of the young season and his first ever on the STSS South Series. It was also the second victory in as many races for Sheppard this season at Delaware.

“Coming down here and running good definitely helps with the long ride home for sure,” Sheppard joked. “This car was fast tonight and it was the best it’s been so far. We’ve been really close with it and we’ve been working on it a little bit at a time trying to make it better and I don’t know what we did but it was great tonight.”

Sheppard surged to the front from his third starting spot on lap one. At that point it seemed like that was all she wrote and ultimately at the end it was but the “Electric Company” Ryan Watt had other ideas as he worked his way to second quickly looking to defend his win from last year in the event.


Watt was all over Sheppard when the caution flew on lap 13 when Carson Wright blew a right rear tire and came to a stop in turn four. Anthony Perrego who was running in the top five at the time had nowhere to go and hit the stalled car of Wright and spun out. Perrego was able to restart his car and rejoin the field.

Watt was able to get a good run on Sheppard on the outside to grab the lead on the restart, but Sheppard stayed with the rim riding Watt and kept working the low side lap after lap. Sheppard would get good runs on Watt coming out of turn four but was never able to quite clear him as Watt would use the momentum of the outside lane to power back by him coming down the front and into turns one and two. The two championship drivers continued to battle as the race approached the halfway mark, but you could see every lap that Sheppard’s car was coming on stronger.

“I thought our car was good enough to run the top, but I didn’t really want to go up there unless I needed to,” Sheppard noted. “The car was just so good on the bottom and I could come off the turns so straight and it was just a lot of fun to drive. The battle with Ryan (Watt) was really fun, I felt after he got by me that I was still a little bit better than he was. I just had to be patient and then I could see he was starting to slow down on the top a little and I was able to get back by him.”

Finally, on lap 28, Sheppard was able to complete the pass and grab the lead back. This time the driver out of Waterloo, N.Y., was not looking back as he added to his lead by a almost a second each lap. While Sheppard was stretching his lead over the final dozen laps a battle royal was waging behind him for the balance of the top five.

Ryan Godown, Craig Von Dohren and David Van Horn had all caught up to Watt for second at this point. The four drivers swapped positions numerous times each and every lap until the finish with Watt being able to withstand the challenge to finish in the runner-up spot.

Following Sheppard and Watt across the line were Godown, Von Dohren and Van Horn. Finishing sixth through tenth were Andy Bachetti (hard charger of the race), Rick Laubach, Duane Howard, Jeff Strunk and Anthony Perrego who battle back for a top ten after his incident on lap 13.

Another Second-Place Finish for Watt

Watt thought he was in a good spot to repeat his win from last year in the “Diamond State 50” when he took the lead from Sheppard on a lap 13 restart. But unfortunately for the Boyertown, PA driver he was up against the hottest dirt modified driver in the northeast and a driver who never ever gives up. Sheppard hounded Watt each and every lap until he finally regained the lead leaving Watt with yet another second-place finish at the end.

“Yeah, you hate finish second after having the lead,” cited Watt. “But the top started to go away there during the middle part of the race and Sheppard was so good on the bottom. I tried the bottom with my car for a couple of laps by my car just didn’t want to work down there so I moved back up. To finish second with all the talent that was here today is nothing to complain about.”

Even though Watt would have much rather won the race, it was nothing to be ashamed finishing second to Sheppard who is on pace at this time to eclipse his 41 wins in 2017.

“Matt (Sheppard) is really on a roll and has everything working for him right now,” mentioned Watt. “He’s tough to beat without everything going his way. We’ve had runs like that in the past and hopefully we can get back on one soon.”

Another Strong Run for Godown

It’s only a matter of time before Godown and the Petruska and Son’s Atlas Paving team make a visit to victory lane. The Bicknell chassis they are using equipped with their big-block motor has been fast each and every time out. After starting ninth in last night’s feature race, Godown was able to make some calculated moves early on to get up into the top five and eventually settling into the third spot where he ended up finishing.
Godown and Craig Von Dohren waged a heavyweight battle the entire second half of the race battling for the third spot with David Van Horn throwing his hat into the fray with about ten laps to go. Godown was able to hold on the podium spot and talked about how this car has performed every time they bring it to track.

“Listen, this car is good. Every time we get this big-block out it’s good,” Godown mentioned. “No matter where we’re at, here at Delaware we’ve been really good. We ran good at Bridgeport and Georgetown with it. We had the flat tire at Georgetown and if not for that we might’ve have been able to win that race. If it wasn’t for some bad breaks, we could’ve had a couple of wins. Tonight, I thought I would take it easy in the beginning and not get too hot headed and it worked out for us. I was able to pick out some of the right lanes early in the race to get me to third. I always thought that I was there to be able to contend but not quite all the way there if you know what I mean. We’re close but not quite all the way there yet but I’m really happy that we’re going in the right direction. It’s not we lost to any slouches either. Sheppard is the best right now and is fast wherever he goes, the man is just that good right now and Watt has that suspension down better than any of us and is always super-fast at these big tracks so we’re happy. I was fast through one and two but was just lacking a little on three and four and that’s where I have to improve myself as a driver.”

37 Modifieds took part in the night’s activities with the four heats being won by Von Dohren, Watt, Sheppard and VanHorn who posted the fastest lap during the timed warmups earlier in the night. The consolation race was won by Frank Cozze…

A great job of driving to all the drivers in Modified heat four as Danny Bouc spun in turns three and four right in the middle of the track while running second. It looked like it was going to a disastrous situation but somehow all drivers were able to avoid the stopped car of Bouc…

Mike Mahaney made the long tow from King’s Ferry, N.Y., to race last night. I believe it was Mike’s first ever race at the speedway. Mahaney easily qualified through his heat and ended up with a 14th place finish in the main event…

A multi-car crash took place in the Crate 602 Sportsman feature race with the cars of Dan Fleming who ended up going over, Joe Toth and Stephen Kemery seemingly getting the worst of the damage. All driver were ok…