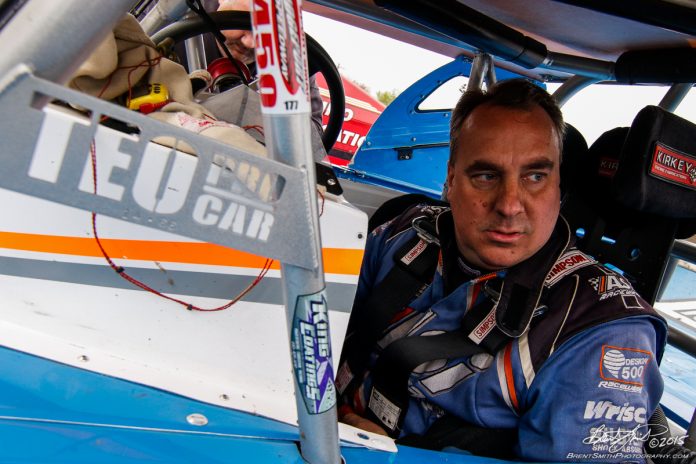 An unfortunate incident took place on Saturday night (5/25) at the Bridgeport Speedway between track officials and former track champion Rick Laubach.  After disagreeing with a decision made by speedway officials a lengthy delay was necessary to remove Laubach from the racing surface so the night’s racing program could continue.

Dirt Track Digest reached out to Laubach on Monday afternoon to check in with the popular driver from Hellertown, Pa.  Laubach wanted to issue a statement about the incident and what transpired on Saturday at the Bridgeport Speedway.

“It’s just a shame they can’t realize their mistakes and rectify them on the spot. Once again, I got screwed by scoring laps when the yellow was being called to the driver but not on the track lights yet. I just can’t deal with it and needed to make my point! The track has called me apologizing and are going to change the rule finally and wants to publicly apologize to me at the track Saturday before the races. I am not sure what I am doing yet and even if I’ll run. I want to concentrate on what is positive and get my stuff ready before I make a move. With the way the way Bridgeport sets up the schedule it doesn’t pay to run for points and it’s too late to stress about any other point series at tracks this season. I have great car owners that support me and know what’s right from wrong and are working as one team to what’s best for us from here on out. I love Bridgeport and I’ll be there again in the future but for now I am uncertain. I am really ashamed at myself and them for dragging that out when it could have been fixed in one parade lap. Thanks for reaching out”

To be fair to all involved I also attempted to contact Bridgeport track manager Danny Serrano to get a statement from the management at the speedway. Danny was kind enough to get back to me a short time ago with the following statement.


“It was an unfortunate situation that occurred. I understand Rick’s frustration, but we stand by the official call that was made. After looking at the video the following morning the correct call was made. It is unfortunate that this happened and at times things can get way out of hand in the heat of the moment. Like I said we understand Rick’s frustration, however it was uncalled for and unnecessary and actions like that just can’t be condoned. We tried to be as professional as we could in explaining it to him, but Rick saw it a different way. Rick is a great driver and an asset to Bridgeport and it was entertaining I guess. But at the end of the day it was not part of the professionalism that we at Bridgeport Speedway try to portray to our drivers and fans.”

It was an unfortunate incident for all involved and I hope both parties can put this behind them and move forward in the future. Will there be any further action taken by the speedway or by the State of NJ? Only time will tell