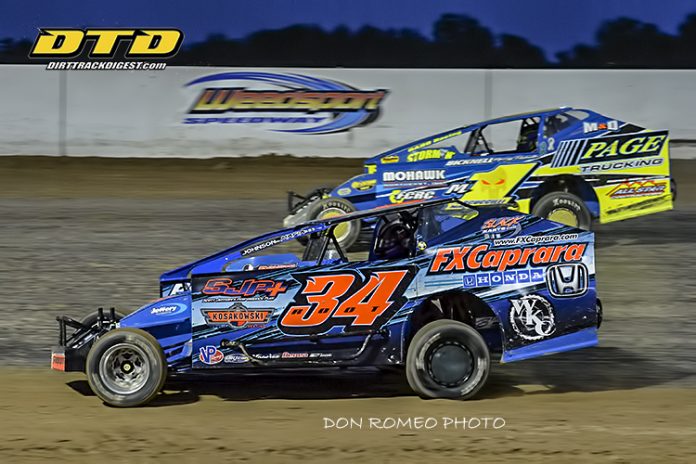 I made an attempt to attend four different races at four different race tracks over the Memorial Day weekend. Friday the weather was amazing at Brewerton, as was the racing. I also got to help out Bill Foley by doing some victory lane interviews, but to be honest with myself and you, I was way out of my comfort zone doing them.

I struggle to figure out what causes drivers who race with each other weekly at the same two tracks drive so radically different depending on which track they’re at. The Sportsman division is filled with talent, yet sometimes it takes them several laps with several cautions to get into the racing rhythm. In the end they always put on a great show, but I believe some are always too impatient trying to get to the front.

Chris Mackey was able to celebrate his first ever Brewerton Speedway win after racing 15 laps side by side with Kevin Root. It was one of the cleanest and most agressive races I’ve seen all year as neither driver was giving the other much room, but they gave each other just enough to avoid contact.

An early rise to attend a men’s breakfast Saturday morning followed by a work day at my church had me pretty beat by the time Fulton’s gates opened. Once again the racing was great and Jackson Gill pulled off a “twofer” in one of the Sportsman features after starting deep in the field.


Ron Davis III earned his first ever 358 Modified win since moving up to the divsion late last fall. I had a chance to chat with him in the pits during track prep before the features. He said the 358 Modified is way more fun for him than the Sportsman division was. If news of this gets out (oops, it just did) maybe the car counts in both divisions will see a shift in numbers as more Sportsman teams make the transition.

Sunday after preaching a powerful message about fearing the Lord in marriage I took advantage of a few hours of free time to enjoy lunch out with my wife. I picked up a friend from my church afterward and we headed to Utica Rome. They were forced to cancel around 5PM but not for a lack of trying to prep the track, battling a constant drizzle that turned into some moderate rain. I did get to visit with quite a few of the Lucas Oil Empire Super Sprint drivers and teams, and pray for them at their driver’s meeting before the show got cancelled.

I chose to work Monday at my day job, then jumped on the New York State Thruway as far as the Weedsport exit to attend the Super Dirtcar Series Heroes Remembered 100. Great car counts and another beautifully sunny evening complimented the show. Seeing drivers run the top to make their own lane on a dry slick track was well worth the drive.

Tuesday I was back at my day job completely exhausted and satisfied in an awesome weekend of racing ministry and other activities. Looking back at something I admitted earlier about stepping out of my comfort zone to help out Bill Foley, I realized all growth comes with discomfort. Children experience growing pains when growth plates shift in their bones. Body builders have to go through the pain of self discipline and push through plateaus of development so their muscles can grow.

The same principle applies in our walk with God. If we stay where we feel comfortable, we’ll never experience the awesome increases that comes when we step out of out our comfort zone and allow God to be Himself in our midst. Too many sects and denominations limit God by creating formulas and traditions around what He once did, without considering what He might want to do right now. Some give Him “permission” to have His way, only to ask Him to stop moving before He barely gets started.

We have to realize that what seems extraordinary to us is normal for Him. He is a supernatural Being, who manifests Himself through three distinct Persons, each with unique personalities, yet all are One. Whenever we try to reason how He may want to move we are actually hindering the limitless potential of the expressions of His nature.

We, as believers, have to take the limits off our thinking and return to His Word. Only there can we develop an expectation based on the expressions of God’s nature which He chose to reveal through the Bible. Many churches are waiting for a move of God, but when they begin to experience one they shut it down because it doesn’t fit their mold, or their human ideals of God’s nature.

The principles of God’s Kingdom make many uncomfortable because to experience His Kingdom you have to be open to experience Him in all of His supernatural power and glory. Here lies the main issue. Our spirit craves what God is offering because we are supernatural beings (spirits) temporarily living in natural vessels (our human bodies). What our spirit truly desires is to be with God, but our flesh is resistant because it has to put off the unholiness of the world to enter into His presence.

As Paul was writing to the first century Church in Rome, speaking to the believers there, he gave these instructions:

“Because we belong to the day, we must live decent lives for all to see. Don’t participate in the darkness of wild parties and drunkenness, or in sexual promiscuity and immoral living, or in quarreling and jealousy. Instead, clothe yourself with the presence of the Lord Jesus Christ. And don’t let yourself think about ways to indulge your evil desires.
Romans 13:13‭-‬14 NLT”

God wouldn’t speak to us through one of His Apostles in this manner unless God had given us the ability to do what He was saying. His grace is more than the power of God providing our salvation. Once we receive His grace through faith in the finished works His son Jesus Christ
performed on the cross, God’s grace enters us and empowers us to resist the very things we did that separated us from Him.

I believe if we ask God for something, or expect Him to move, we should get out of the way and let God be God. Don’t allow human traditions and the doctrines of men to prevent you from experiencing the fullness of what God desires to do in your midst. Allow yourself the uncomfortable sensation of not being in control, and allow our sovereign God to take control and pour out His Spirit to fulfill His purposes.

If we adopted the mindset of David, king of Israel, worshiper, and Psalmist, we’d see God having His way far more often.

“So I have looked for You in the sanctuary, To see Your power and Your glory.
Psalms 63:2 NKJV”

Have you looked for Him lately, desiring to see His power and glory? Has He manifested among you to the degree your spirit shouts praises and your flesh grows weak? If not, you’re missing out on a magnificent opportunity to grow in the Lord.

We’re always around if you need us. We’re here to serve the sport as we do the body of Christ, His Church. I can be reached by email at flchaplain@windstream.net, or on Facebook at Finish Line Chaplain, or at Kevin Westcott Ministries. Have a blessed week. We’ll see you at the races real soon.