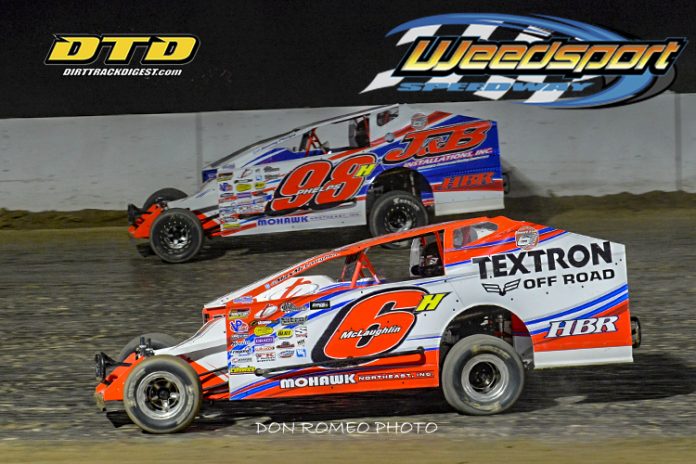 WEEDSPORT, NY – Max McLaughlin was all smiles and praise after the Heroes Remembered 100 Super DIRTCar Series lid-lifter at the Weedsport Speedway on Monday and for good reason. Not only did he finish a stout runner-up but he pressured Stewart Friesen for the better part of the last half of the race staying within a few car lengths throughout.

When he took the lead right from the outcome of the 100 lap event many in the packed stands were preparing for a yawner and that is even with Matt Sheppard in the field. And, for the first half of the event it looked like that was going to be the outcome.

Enter the second generation, 18-year-old McLaughlin as he wanted to throw a twist in the plot, stir things up if you will and he indeed did just that.


Using some high lane passes and some low, he darted into second on lap 45 from his sixth place start and then he found a quick route down low, especially off turn two going into turn three.

“I can charge into three pretty good, there was a little grip on the bottom,” said the driver known in these parts as Mad Max. “I could stay in the grip, launch off the corner (turn four) real well and get a wheel under him (Friesen)”

It was lap 66 when a few thousand fans were, well, basically coming to their feet. Max was making a challenge side by side with Friesen. Some fans rooting for the young fella, some rooting in what we now can call the veteran.

“I thought I had a chance to maybe get ahead where I could slip up in front but I just didn’t quite make it,” he went on. “I was trying but when he saw me he started to use the bottom also so that made it tougher for me.”

As the race came down to the last five or so laps, the duo was coming up on a gaggle of slower cars and McLaughlin was trying to get a plan set up.

“I could see we were gaining on them and I started to think what I wanted to do to see if I could get by,” McLaughlin told of the closing stages. “Actually for the last 15 laps or so I was thinking how I could blast the top of three and four with him moving down. When we closed in there at the end I really wanted to try it but I just couldn’t get close enough to where I thought it would work.”

When substitute starter Larry Woodruff waved the double checkered it was Friesen one and McLaughlin two. But as mentioned earlier this was an 18-year-old that was all smiles.

“It’s awesome, you usually aren’t to happy to finish second but on a night like tonight where you did it on a track where I have struggled for three years now and then to a driver like Stew this is like a win for me,” he continued.  “This means a lot, its the series opener and Stew has been so fast this year, he has a ton of wins already. Also look what he is doing on the truck series so second to him is cool.”

For McLaughlin he came on to the scene a few years ago, he was highly regarded and I guess you can say justifyingly so. He’s a son of a Hall of Famer (Mike) so the pedigree is there and he’s had success behind the wheel growing up. However, these northeast mods are an unfamiliar beast to many and take some time to adapt.

He knows the tools are there with help, equipment and funding. Now he’s focused to put his name in the headlines.

“We are going to have some wins this year I just know it, we are going to have a good year. I got myself ready to do what needs to be done behind the wheel,” McLaughlin told of his goals. “Especially after today I think a few wins and possibly a top five in points on the series is realistic.”

In this day and age, there’s not many drivers his age focused on their future or even ready to take advantage of what they have…McLaughlin is just the opposite he knows what is provided to him but he also knows it’s his job to produce.

“Al (Heinke) as you know will do what it takes to make a winning team and I’m truly fortunate to have that but I have to get wins and results,” he said with a focus of a 30 plus year old. “I have a great teammate (Jimmy Phelps) and a awesome crew, I now have to my job.”

That stat line from 2017 shows 27 starts, three top five’s and 13 top 10’s totaling ninth in points. You read his goals and with his start last night as Weedsport he’s off to a good start. If I was a betting man, I will lay some good odds that 2018 will indeed be the break out year for one Mad Max McLaughlin