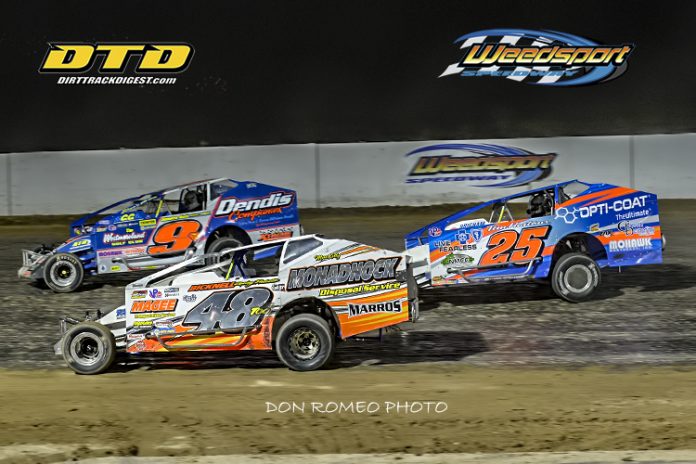 Jimmy Phelps doesn’t have the wins he’d like to have so far in 2018, but the Baldwinsville, N.Y., has had a pretty good start to the season once action got rolling in Central New York. On Monday evening Phelps earned another podium finish with a third in the Heroes Remember 100 Super DIRTcar Series event at the Weedsport Speedway.

“I don’t think we’ve been outside the top four in Central New York yet other than the Utica-Rome small-block race,” mentioned Phelps. “They are going to come. We just have to keep knocking on the door. All and all it was a great night. I was happy with the whole show. It’s another podium finish. We’ve been consistently pretty darn good so we are just going to keep rolling until we are standing up there.”

In Monday’s race Phelps had one of the better car during the later stages of the 100 lapper gaining on the battle for the lead between Stewart Friesen and Max McLaughlin. He got close but leveled off as a result of traffic. He could get a very good run when he entered the middle groove in turn three before driving off the bottom lane of turn four.

“I actually thought at one point with 30 to go we were rolling pretty good,” stated Phelps. “I thought we were going to have something for those guys. It seemed like when I got pinched up in traffic I couldn’t roll the middle there and I slowed down a little bit.”

Erick Rudolph once again found himself in the top five at Weedsport. The Ransomville, N.Y., driver drove his Bicknell to a fourth place effort in the 100-lap affair. Like Phelps, Rudolph’s No. 25 seemed to get better as the race went on as he was able to move around to make some passes.

“We didn’t have a good first 20 laps and with the level of competition here you are playing catch up a little bit,” cited Rudolph. “At end of race it was coming alive. That is usually where our cars work. They are better at the end. A caution with 15 to 20 laps to go would have helped us advance a spot or two, but we are really happy with how the car worked today.”

Rudolph has been close to a Weedsport triumph in Super DIRTcar Series action. He knows if he can continue to run like he has been it is only a matter of time.

“The last five races we’ve been in the top five,” commented Rudolph. “We are always there, always fast. When you are doing those things right every now and then you’ll win. When you hang up front sometimes things fall your way.”

Matt Sheppard came from deep to win the Icebreaker 50 a little over a week ago at the Weedsport Speedway. In Monday’s Heroes Remembered 100 the Waterloo, N.Y., driver just couldn’t get things rolling after setting fast time of the night in time trials. The track was much different than the previous week’s action with Sheppard admitting the car was just off.

“We struggled to get around Billy Dunn,” said Sheppard of his near race long battle with Dunn for the third and fourth spots. “Other guys were able to get by us. We just weren’t as good as we needed to be.”

Racing resumed with another quick yellow necessary for Willy Decker. Decker got caught up with another car in turn four damaging the frontend on his Dodson Construction No. 1x.  He was towed to the pits…