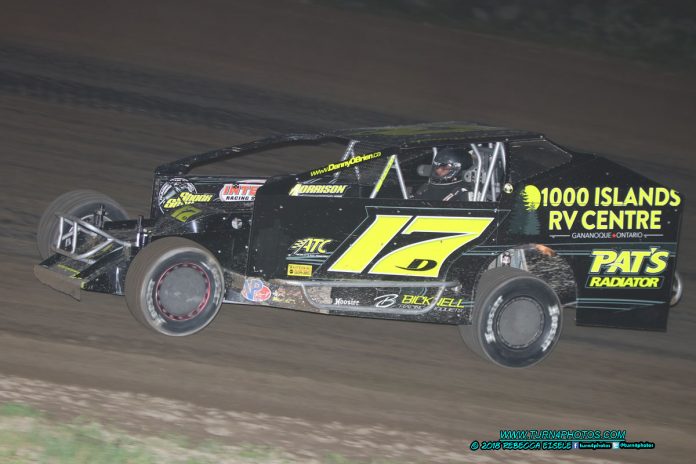 Danny O’Brien has hit on the hot setup so far early in the season at the Can-Am Speedway. The Kingston, Ont., driver darted his way forward in Friday night’s 25-lap A-Main to pick up his second consecutive win at the North Country oval adding to his strong start so far to the 2018 campaign.

“We’re having a blast,” said O’Brien afterwards. “I couldn’t be happier. We got a win in early in May which is good. We started off with one here in June. So far is has been a great season. I don’t want to talk too much because it could go sour at any time. We got luck on our side right now. We’ll ride the wave while it’s going because tomorrow it could be gone. We’ll take it as we go, one night at a time.”

O’Brien utilized all lanes on the speedway on Friday working the high-line to get to the front after starting in the 10th position with his No. 17D. Once he got the lead he moved right back down to the bottom with his Bicknell mount.

“I got a very well balanced car,” he said afterwards. “We are able to pass cars on the outside. I knew they weren’t getting off the bottom tonight so I had to get to the front on the outside, get back to bottom and it was just an awesome driving car.”

The past few years O’Brien has focused his efforts on weekly action at the Brockville Ontario Speedway on Saturday nights. This year he’s enjoying two night a week action. He feels that adding the second night has improved his program.

“I’ve raced Brockville all my life and you get stuck in a rut.” Mentioned O’Brien. “I’ve found when I got to other places with speed I had a hard time getting the car loosened up and stable. We never got a chance the first night, second night we struggled but then we found something that is really good.  We’ll keep going with that.”

O’Brien’s charge to the lead on Friday was aided by a mid-race restart on lap 13. O’Brien beat leader Scott Webb off the corner and that was that. Billy Dunn challenged only for a lap before O’Brien pulled away for the $1,500 win.

“We worked all winter on restarts and he his has this motor so it’s clicking right now,” O’Brien cited of his motor builder Pat Morrison. “We can get cars on restarts or at least keep up. That’s what it’s all about.”

Beating Dunn at Can-Am is never an easy task but so far O’Brien has been able to pull off the feat twice. He was thankful for the help Dunn gave him earlier in the season which has helped his program improve. The improvement has helped him pass the strong field of drivers at Can-Am each week.

“Billy is a good friend,” noted the 52-year-old campaigner. “He’s always shot me straight when I asked for help. I went to him a while back and told him I’m struggling. He helped me out and I’ll never forget that. When you win here you earn it. Billy Dunn, (Ryan) Arbuthnot, (Scott) Webb, there is a lot of good cars and it takes a lot of pass them.”

Dunn Searching to Get Better

Coming into Friday night’s program Dunn had yet to find himself in Can-Am victory lane. That trend continued as Dunn came up just short to O’Brien. Right now he’s searching for a combination to get better to improve upon his second place finish.

“Track is a little different this year,” said the Watertown, N.Y., driver. “It’s good. It’s racey. The stuff we did in the past doesn’t seem to be working. We threw some different things at it tonight and it seemed to be working. Hopefully we are heading in the right direction. Right now we are a second place car but we are closer than we were last week.”

While O’Brien got some breaks getting through the field, Dunn had no such luck as it took him nearly a third of the race to break into the top five after starting ninth.  On the flip side, O’Brien was in the top five early and moving forward quickly.

“He got some breaks in traffic, but he’s been good enough to make them breaks work for him too,” stated Dunn of O’Brien. “I thought I had some times where I was going to get there. I didn’t have a good enough car to fill the holes.”

Dunn had one shot at O’Brien on the lap 13 restart. He tried the outside of turns three and four. It just didn’t stick. O’Brien drove away for the victory. From there he searched looking for a line to gain ground. It just wasn’t there.

“I thought I had something for him on that restart, but he rolled the bottom a little better,” Dunn said. “I knew I wasn’t going to get him following him around so I tried searching. A couple laps I felt like I gained on him but I couldn’t find a consistent line to catch up to him.”

Webb Has Best Run Since Return

Webb, of Brownville, N.Y., returned to compete at Can-Am Speedway after stepping away from the sport back in 2010. Friday night’s feature saw Webb pick up his best run of the 2018 campaign with a third place effort. Webb even led a few laps during the middle portions of the race before losing two spots to O’Brien and Dunn.

“We had a really good car finally,” commented Webb about his Morrison powered Bicknell. “We ended up sixth last week and now this. I think we are coming around pretty good.”

Webb went off from the inside of the second row. He moved into second in the opening laps while chasing Luke Stewart. Eventually Stewart slipped up and Webb dove underneath him to secure the lead on lap 12.

Unfortunately his fortunes changed on lap 15 when the caution came out. The ensuing restart saw O’Brien and Dunn both rocket by him to put him back in the third position where he eventually finished.

“I think Danny might have jumped the restart a little bit,” noted Webb. “I was in chase mode. I knew he was going to go to the bottom. I figured I better tow in behind him. Billy just few up around us and we followed them around. We had a good run.”

Webb decided to get back into racing after the long layoff to spend time with his nephew Nick as well as his girlfriend and daughter who also love the sport. So far it’s a taken a little bit of time to make the adjustment as his previous experience was in a much more powerful big-block. The small-block is proving to be a much different animal.

“It’s tough,” mentioned the 46-year-old. “These cars are tougher to drive than a big-block. In the big-block it seemed like you would slow down and finesse it. These cars, honestly, it feels like you pound the hell out of them to get them to go. You can drive these cars in the corner a little bit faster. It’s been a good adjustment. We are glad to be back. I love running with my nephew Nick and his other brother in Sportsman. We have a great time.”

15 DIRTcar 358-Modifieds were in action on Friday night. Two heat races were run with Tyler Meeks and Jeff Sykes picking up wins…

Zach Aubertine took over driving duties in the Steve Bilow No. 20 for the feature event…

Friday night’s show started promptly at 7:30 p.m. with all action complete by 10 p.m…

Lightning was visible in the distance on Friday night as the program progressed, but rains never hit the speedway.