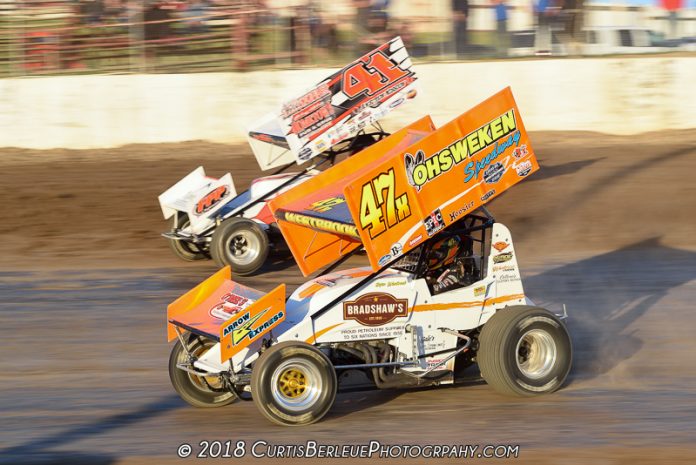 I was already on my way to Brewerton Speedway Friday afternoon when the text notification came that rain won the night. I had planned a dinner out with a friend so we met and had more time to fellowship. A lazy late evening at home was no problem after dinner because of the extra things I had done since Memorial Day.

Saturday 36 Sprint Cars rolled into the pits at Fulton Speedway for the Patriot Sprint Tour. Two young guns were the class of the field when the checkered flags waved to bring an end to their A-Main. 19-year-old Jordan Thomas was able to hold off the late race advances of 19 year old Dylan Westbrook to capture his first Fulton Speedway 360 Sprint win. Westbrook didn’t show any reservations all through the night racing with a broken right hand.

Pat Ward held off Larry Wight, then Tim Sears Jr. to win his first Tracey Road Equipment 358 Modified feature of the year. “Timmer” was second with “Lightning Larry” rounding out the top three. All of these cars run LJL Kevlar motors and really put on a great effort through the entire 30 lap feature.

You can read all about the event and other results by other columnists here at Dirt Track Digest. Utica-Rome lost another event to the weather, and man did it rain at the forecasted time. They made the right decision as unfortunate as it may have been for them. Let’s lift them up in prayer so they can finish their scheduled season well and not lose any more events to the weather.

I want to dive right in to some thoughts I’ve had relative to the outstanding youth drivers we see in almost every division and class. There are two distinct traits of drivers that stand out, those exuding professionalism, and and those driving with passion.

The passion to win while respecting equipment is something kids learn at a young age in divisions like go karts, quarter midgets, and microds. I see at least seven to 10 of them every weekend in the Sportsman division at Fulton Speedway alone. These youthful racers get intimately acquainted with the handling of their cars and learn how to communicate to their crew what they need to succeed.

On the track you see them racing their heart out no matter how their car handles, usually beating older or more experienced drivers with equal equipment, with few exceptions.

The “professionals” tend to show more frustration when things aren’t working the way they planned, or when things go sour during a race. You can always tell a driver is passionate because they never quit, they don’t get distracted, and they are driven by their passion to succeed. The thrill of racing keeps them pushing to get better with each race, and they always pull their crew along in the wake of their passion. It’s infectious.

A generation is rising that will bring new life to the sport, attracting new fans and sponsors, because the passionate young racers enjoy what they do and that rubs off on people.

When you consider that a 15-year-old has two feature wins in the Sportsman division at Fulton, and many of the other winners are between their late teens and mid 20’s, you’ll begin to understand better what I’m observing. Not too long ago that was unheard of as the seasoned veterans “took the kids to school” most times.

In relative closeness, most people picture God as an old white haired dude wearing a white robe or something. In reality Jesus Christ, God in the flesh, was only 30 when the Holy Spirit descended upon Him at His baptism. He was only 33 when He championed the human experience by dying on the cross without having ever sinned. That was His passion. When He hung on the cross we were on His mind. You and I are what Jesus Christ was so passionate about. He knew us before we were in our mother’s womb. He saw us before time began. He chose us before He laid the foundations of the world.

Tue youth that race have showed us you don’t have to be too old to conquer a racetrack and drive away from the competition. You only have to have a passion to win and the drive to pursue that passion. Jesus didn’t have to be an old man to champion our eternal security either. He had the drive to please our Father with a deep passion to rescue humanity from the grips of the enemy.

“For the grace of God that brings salvation has appeared to all men, teaching us that, denying ungodliness and worldly lusts, we should live soberly, righteously, and godly in the present age, looking for the blessed hope and glorious appearing of our great God and Savior Jesus Christ, who gave Himself for us, that He might redeem us from every lawless deed and purify for Himself His own special people, zealous for good works. Titus 2:11-‬14 NKJV”

He gave Himself for us. That’s passion. In fact, it was Jesus Christ who spoke these words giving us this example selflessness for another.

“Greater love has no one than this, than to lay down one’s life for his friends.
John 15:13 NKJV”

He was willing to lay down His life, considering the prospect of our reciprocal friendship and fellowship, because His limitless love wouldn’t allow Him to view us any other way. A husband and wife team of modern worship leaders, Bryan and Katie Torwalt, penned a song called “Champion”, that begins with these lyrics:

“Oh, victory, You have won
Victorious, You have come
What was stolen, You brought back to us”

That sums up what Jesus Christ did for us. Everything that was stolen through deception by the serpent in Eden is restored the moment we acknowledge Jesus paid the price for us to be reconciled to the Father.

Passion is a powerful driving force no matter how it’s applied to life. It propels racers into victory lane, and provides an eternal promise of salvation to everyone who confesses Jesus Christ as Lord.

I look forward to seeing you at Brewerton this Friday to kick off another weekend. The weather looks promising all weekend and the events look pretty exciting. Stay blessed so you can be a blessing. As always, we can be reached at:

finishlinechaplain@windstream.net, or on Facebook at Finish Line Chaplain or Kevin Westcott Ministries.