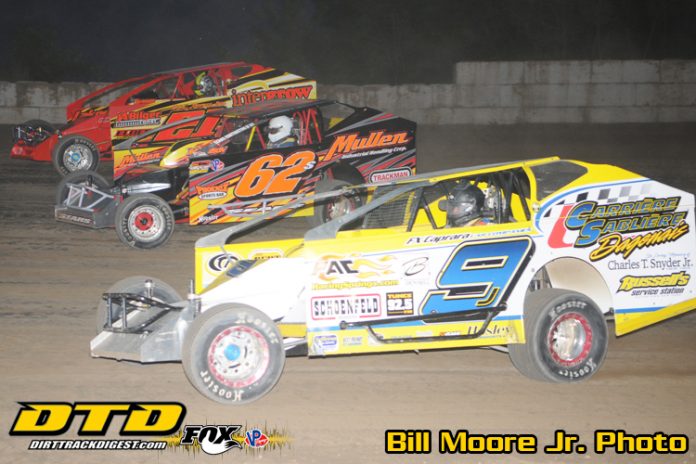 Jordan McCreadie has found a new Saturday night home for the 2018 season as the Watertown N.Y., heads south on Route 81 to the Fulton Speedway.

This was something completely different for Jordan as he said, “Going back to the end of last season during Super DIRT Week we struggled at the different tracks we ran. I wanted to try different tracks this year and work on different tire compounds. However, the Canandian money situation has contributed a bit to the decision.”

Weekly racing at Fulton was something totally out of the box.

He said, “I raced here once back when they changed the name of the 200 from the Victoria to Outlaw. I came down with a small-block. In fact it is the same basic small-block motor I use now. My brother Tim looked at me and said, ‘I don’t know why you’re here.’ I started right up front for the heat and by the backstretch we were five wide and I was back in eighth place by turn three.”

So here he is at Fulton and he’s surprised at the result.

Jordan noted, “We’ve been running halfway decent. I thought that I probably wouldn’t do that good until maybe halfway through the season. But things are going okay.”

Continuing he said, “It is good racing here and it’s a nice, solid track. It is easier on equipment. I haven broken a bumper or touch nerf bars and you can run three wide easier. You have a high groove, can run top or bottom as well as the middle.”

Unfortunately, the driver sitting third in Fulton points entering the night didn’t have a night to remember this past Saturday night.

He finished last and didn’t to complete two laps in the feature.

Explaining the fourth turn situation he said, “We got bunched up on the restart and I ended up catching Billy Whittaker’s rear bumper with our right front shock tower. We broke that and bent the shock. It was easy to fix but just a little bad luck.”

Jordan has done plowing and small engine work, but his desire is to be a race driver full time much like his dad, Bob, and brother Tim.

He said, “I am trying to race full-time and as many series and big shows that I can possibly run. We are running weekly on Friday at Can-Am and on Saturday at Fulton. I would like to try Utica-Rome on Sunday, but my guys just can’t do it.”

However, continuing he said, “Right now we have one car and one motor, but we have quality equipment and motor program. “

It is a learning experience for the youngest McCreadie.

“I like to figure out stuff myself,” said Jordan. “But I talk with my dad every day. It’s great to have a common interest with him. It helps make my program mesh better.”

Jordan McCreadie is hopeful to expand his racing expertise this season in his quest to continue in the footsteps of his father and brother.