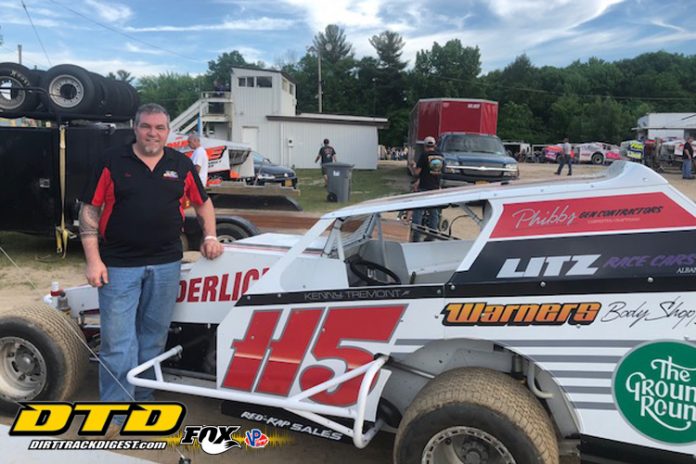 Friday night we made the usually trip to our Friday night track, Albany-Saratoga. In the past we’ve thought about so many race cars and only five or six winners on any given night. Lyle and Marcy came up with a way to have many winners. Drivers, owners and crews provided over 90 bicycles to be given away before the racing started. The kids that came away with a bike will remember this night for a long time. What a great way to get the young fans involved in the action. We snapped this shot of Jacob after he won the bike from the Jeremy Wilder race team. Ten year old Jacob is probably now Jeremy’s newest fan.

On our way down pit road we spotted a replica of Kenny Tremont’s early Modified ride so we stopped to get information on the car. The car was also there for a shake down before an upcoming vintage race at another track. The owner of the car is Dan Wood who is also the recently named President of the New York State Stock Car Association.

Dan said, “I tried to make it as close to the real thing and even had it painted by the same people that painted the original race car. This is a copy of the 1987 car that Kenny won the New York State Fair race with.”

Dan and his Dad were connected with the Tremont race team but it was with Kathy Tremont when she began. We agreed with Dan that Kathy was a great young racer and for those that missed her racing they missed seeing one of the up a coming young ladies of racing.

It was also great to see Don Mattison return after his hard crash a few weeks ago. Don wisely took an extra week off to make sure both he and the car were back in order. Saturday we took a trip to OCFS in Middletown for their annual Nostalgia Night. What a great night and what a great idea to devote a night to the history of our sport and give fans and racers the chance to remember the good ole days. And that they did. We ran into Buzzie Reutimann who brought the Beak Built Modified he still races at tracks cross Florida where he is still winning at age 77.

Yes, Buzzie said, “When they put me on the pole, I just get out in front and stay ahead.”

He was laughing and really enjoying the many fans that turned out at OCFS on Saturday night. Buzzie came with his son David, former NASCAR driver and winner and owner of David Reutimann Enterprises that owns Beak Built Chassis where he does much of the building of the IMCA/UMP style modifieds himself.

Buzzie began his racing career at 13 years of age when he went to the Florida tracks with his father who was also a racer.

“He used to let me run the track in,” says Buzzie, and one night I asked him if I could race. He said, “take that car,” pointing to a white car sitting nearby.

They started him on the pole and he recounts that he kept the car in the black groove where rubber had been laid down and,

“I hit my mark and stayed in front” said Buzzie. “Until I saw the flagger throw the white flag, I lost concentration, spun the car and that was the end of my first race.”

Reutimann continued to show interest in racing and one day he asked his father if he could have his own car. His father paused and then said, “Get out there and build it.”

Buzzie and a friend found a 1940 Ford Coupe in the junkyard behind the Chevy dealership his father owned and they built his first car.

“When we cleaned off all the oil and dirt from the engine we found a Sear Roebuck motor,” chuckled Buzzie. This was just one of the many stories that fans heard from drivers that brought back memories of the sport of auto racing.

For those looking for the Gary Balough book, he was on hand autographing copies and there was a line most of the night. The book is available from Balough or from Coastal 181 on the internet.

One other veteran of the sport we ran into was Tighe Scott who drove the famous No. 28 Tighe says he doesn’t go to the races at all any more and if he tapes a NASCAR race he likes to fast forward through the commercials. He still lives in Pen Argyl, Pa. where he is surround by his grandchildren that he sees everyday and is loving it. We also spoke with the dedicated people who make up the ARRA (Auto Racing Research Association)organization. This group is dedicated to the research, documentation and the maintaining of a library of the racing accomplishments of drivers, the weekly history of race tracks and racing series and organizations for archival purposes so that this vital information is not lost to time. We are familiar with this group and their website because we use it quite often, already five times this season. Check it out and remember they are always looking for new information and history on our sport. Also this group is open to any new found or corrections that may come from records you may have. To find their site on the internet search “documenting auto racing history” and the ARRA site will come up.

Before we close our recount of our trip to OCFS we want to say that Chris Larsen and crew have been really, really busy the past two weeks at the track. We all know there was a lot of work to be done at the historic oval and Larsen and his Halmar team have certainly shown they are up to the task. New clay incorporated with some of the old and ready for racing on Saturday was certainly one big job to begin with. We sat in the new chair back aluminum bleacher seats in the half covered grandstand for some of the racing and then moved to the new seating in the covered grandstand. There is work being done all around the grounds and we can’t wait to see the progress by the time Eastern States rolls around. After a change of plans due to the Utica-Rome rain out we headed to Glen Ridge on Sunday and enjoyed a meet and greet with drivers along with the fans. Fans were given autograph photos, candy and other miscellaneous racing items before the racing began. Winners at the Ridge were Dave Constantino; Crate Modifieds, Limited Sportsman, Bill August; Ivan Joslin, Pro Stocks and Andy Graves, Cruisers.