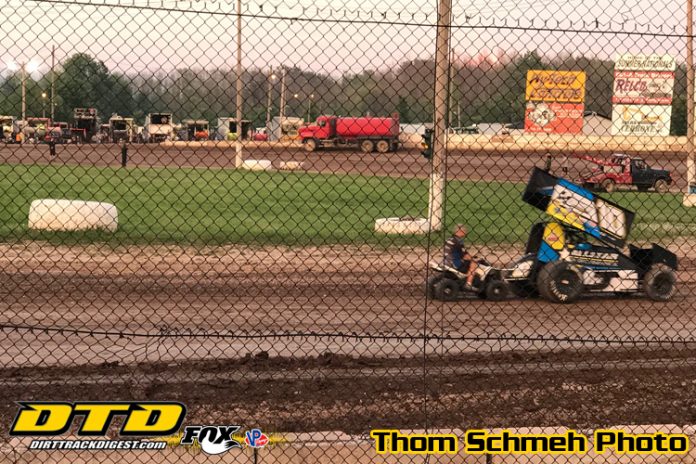 The trip back from California on Amtrak in late May was very enjoyable. I got off in Ottumwa, Iowa (also known as Walter Eugene “Radar” O’Reilly’s hometown), only to drive to Indianapolis with good friend Jim Cadwell. The Oskaloosa resident was a Joie Chitwood Thrill Show driver in 1951, an International Motor Contest Association (IMCA) stock car driver in 1954, a fifteen-year hot-air-balloonist for Vermeer Manufacturing, and a crop-duster amongst other things in his long and varied career. At 86 years of age, Jim still works full-time at Central College in Pella, Iowa. While in Indiana for the week-long Indy 500 activities, we visited…the late Howard Van Ness’ grave in Greenwood (owned the Ralph “Speedy” Helm Hisso ‘big car’ prior to Jim owning it), Mike Shields in Greenwood (introduced Jim to Howard years ago), Carl Hungness in Madison (published the Indianapolis 500 Yearbook for years, and he is an incredibly creative artist), the late Roy Robbins’ grave in Little York (won the inaugural Knoxville Nationals in 1961), Karl Kinser in Oolitic (owner/chief mechanic inducted into the National Sprint Car Hall of Fame in 1994), Following our drive back to the Hawkeye State at the drop of the checkered flag at the Indianapolis 500, we visited…Kevin Wanders in Oskaloosa (builder of modified, late model and sprint car engines), and the Southern Iowa Speedway in Oskaloosa (home of weekly International Motor Contest Association races on Wednesday nights).

**Did you know that, according to Allan Brown’s “History of America’s Speedways, Past & Present,” the first auto race ever held on the Southern Iowa Fairgrounds in Osky was on September 10, 1931?** Back in upstate New York after my 17-day Amtrak adventure, I went to the Ransomville Speedway on Friday, June 1, with friend Dave McMullen for an enjoyable evening of Patriot Sprint Tour (PST action. I had not been to Ransomville since 1980 and was surprised to see that a) the front-stretch moat is greatly reduced, b) the turns now have concrete-block walls, and c) the infield now sports a huge jumbotron on stilts.

It was great to briefly catch up with PST officials Mike Emhof and Josh Aylsworth, who is actively documenting the history of the winged 360-cubic-inch sprint car sanctioning body formerly known as Tom Taber’s Patriot Sprint Group (PSG). 20 sprint cars were on-hand, with veterans Chuck Hebing and Kyle Drum leading Paulie Colagiovanni, Scott Kreutter and Dan Bennet to the finish, respectively. It was fun to watch the more experienced drivers, including eighth-finishing Jordan Thomas and sixteenth-place finisher Brad Knab, run the top-side, while all the others seemed to tip-toe around the bottom.

**Did you know that in 1972, Tom Taber of Belfast, N.Y., who would later start the PSG and be elected to the Empire Super Sprints (ESS) Hall of Fame, raced in the Hooligan division at the now-defunct Drum Raceway in Allentown, New York? Other Drum racers that year were Fran Slocum of Allentown, Tink Mealey of Bradford (Penna.), Phil Mott of Olean, Monroe Puffer of Hornell, Bill Layfield of Allentown, Don Kio of Ulysses (Penna.), Al Skiver of Portville, “Bud” Johnson of Olean, Joe Tomes of Olean, Ron Baker of Hornell, Kerry Bhe of Eldred (Penna.) and Leo Houghtaling of Canisteo.**

In addition to the Sprint Cars, other divisions on tap were the Sportsmen, Novice Sportsman, Street Stocks and Four-Bangers. Ransomville Speedway will host the World of Outlaws (WoO) late models on June 15 and the WoO 410-cubic-inch sprint cars on July 27. **Did you know that, according to their web site, Lancaster super winner Mark Sammut of London, Ontario, Canada, won the 1996 Can-Am Midget Racing Club point championship? He has also won a Can-Am TQ feature at Lancaster in the past. Tenth-finishing Lancaster ISMA super-modified star Dave McKnight (Jr.) won the 1984 and ’90 Can-Am TQ Midget titles.**

A few extra photos from from Thom’s travels: