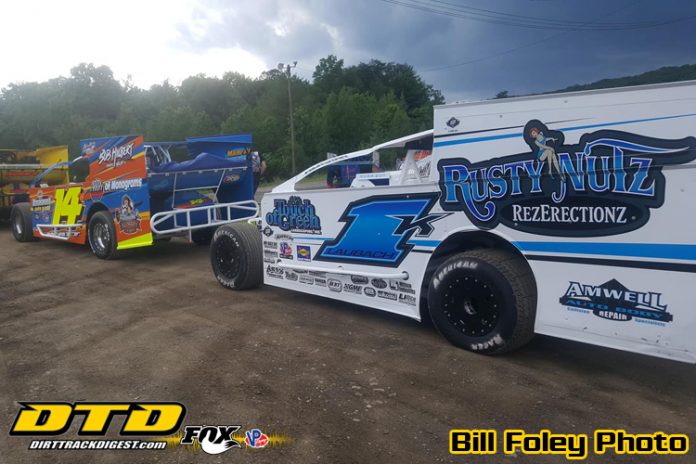 Well, 504 miles from Oswego to Big Diamond Speedway to rain out.

It wasn’t all that bad as I had the opportunity to visit with race folks from DTD writer Kenny Bruce, to a fan Mike from Baldwinsville by way of Bucks County PA., promoter Brett Deyo along with a bunch of drivers I’ve never really talked to before and, of course, a few of the regulars I see in Central New York.

For two hours I was able to wander the pits and as the drivers’ meeting was winding down the 15% chance of rain came down in buckets.  After about 15 minutes there was no way of getting the track back in any efficient manner.

Never having been to Big Diamond before I really didn’t know what to expect. The pits are between one and two while the elevated grandstands use the terrain well and the view from any seat appeared to be pretty decent.

This was the Anthracite Assault (great name) and it brought together quality as well as quantity.

To me the field was much like to old days of the DIRT Motorsports era with a generous mix of drivers from just about every geographic area in the Northeast and Canada.

This was the lone combo show of the year as Deyo explained, “It is the right geographic location and the right size place. You have the southern cars that run the bigger motors and the north cars with the small-blocks. This track provides that middle ground. Early on the big-blocks are good, but as the feature progresses the small-blocks come on strong. This is just the perfect place.”

Deyo explained that this show has been impacted over the years by, “rain, rain and rain.”

It looked good to go on Tuesday, but in the end it was another Mother Nature making it an early night and there have been way too many of those this year in the Northeast.

Mat said, “I got together with Jeff to run the entire series, but we blew up at Orange County and the next race was a rain out (as was this one). “

He got off to an inauspicious start and noted, “I got lost just coming here today.”

The brand new Bicknell chassis powered by a Clements motor was waiting for him when he arrived and he said, “This is a good opportunity and I’m excited for it. We’ll just have to see how it turns out.”

Thus far in 2018 Mat has two wins at Lernerville, one each at Freedom and Eriez along with four at Merritville.

For him this would have been the first race ever at Big Diamond and he noted, “It looks like Lernerville, but we’ll see how it runs when we get out there.”

He said, “We’re second in points behind Matt Sheppard with a win in the first race and a second at Delaware. We struggled a bit on the 3/8th’s of a mile at Bridgeport as I should have brought the car we are running tonight. We won the championship last year and are still going for it this year.”

His expectations for Big Diamond were positive. Ryan explained, “I run good here. The sail panels tend to keep the track tacky so it doesn’t slick up as much and stays fast. Sail panels provide a different feel. The car is tighter and you can still get the car through the corners fast. On Friday nights they run spec heads here, but you can get around here much better with open racing.”

Billy Decker noted that his history at Big Diamond was the best and said, “I’ve been decent here, but overall not good. I just seem to have trouble here.”…

Erick Rudolph decided to chase the Super DIRTcar Series this year as “you don’t have to run a weekly track” for home track points. He would have had to qualify out of the heats or consi as he doesn’t follow the STSS tour, but said “You run and just have to focus on what you are doing. I really don’t feel there is any disadvantage” running against guys that he normally doesn’t run against.

Fellow DTD writer Ken Bruce provided me with his expertise of the track and introduced me to several people I had never met before. Many thanks to Ken and hopefully I’ll get down that way in the near future and join him for a night of racing.

Had a chance for lengthy talks with David Van Horn and Jeremy Smith. I will follow up later this week or in the near future on our conversations.

As always it was great talking with Jim and Kathy Mahaney as he let the fact out that he has a new Bicknell chassis sitting in his garage for himself. Said he wants to tinker with it, but doesn’t have time so far.

Well, a nine hour road trip which got about 20 minutes longer when a New York State Trooper pulled me over north of Binghamton for a headlight that wasn’t working. Well, at least it wasn’t a speeding ticket.

Wish I could have had more on the Short Track Super Series event from Big Diamond Speedway, but rain will do that.

Any notes or comments send along to foley395@hotmail.com