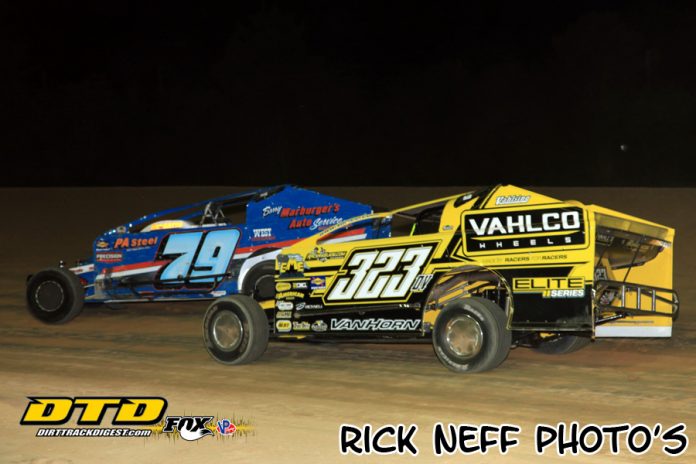 Since he was five-years-old David Van Horn Jr., has been working in a race shop and today he is a major contender in a big-block or small-bock Modified.

The Ringoes, N.J., resident was one of the many high quality entries for the recent Short Track Super Series rained out event at Big Diamond Speedway, but he took time to talk with Dirt Track Digest before the night of action was scheduled to begin.

The legendary Van Horn names goes back a long time for many veteran Modified fans as his grandfather Fuzzy was one of the top names in the Northeast. David said, “I have heard many stories regarding the good old days. It was a time where they built cars and didn’t buy them.”

However, being the grandson of Fuzzy Van Horn didn’t mean that it was a golden spoon for David Jr.

“I started racing go karts at 10,” said Van Horn, “I traveled all over the country and even won some national championships. I ran Sportsman in Upstate New York back in ’09 and then it was big-blocks. I was able to win the small-block title at Orange County in 2007 and the big-block the next year.”

His current travels have him as a regular at New Egypt and he also competes at US 13 (Delaware International Speedway) and Georgetown while hitting the STSS Tour.

Van Horn tries to keep the schedule at a workable pace and said, “It’s me and my dad. We both have full time jobs and it’s tough to race four or five nights a week. This week will be tough as we will have three nights.”

Van Horn is in pursuit of the STSS Southern title as he explained, “Our goal is to win the championship. It’s tough with Matt Sheppard in the lead and Ryan Watt second, but right now we sit in third.”

Further discussing goals for this year he said, “I would like to win the New Egypt championship.”

In order to do so Van Horn feels his style of driving fits in with expectations. “I guess you could say I’m a patient, but aggressive driver. It isn’t a matter of hammer down all the time.”

Looking at his approach to Big Diamond he noted, “In the heats here it is hammer down, but come feature time you have to save the tires.”

The development of STSS is noted by Van Horn as when it was in its upstart phase it was known at the “Working Man Series”.

However, that has evolved and David said, “It is not the Working Man Series anymore. In fact I think it is better than the Super DIRT(car) Series in regards to what is pays per race. There are all good tracks including Georgetown, US 13 is fast, Big Diamond is outstanding as is Susquehanna and now in October the Mecca of tracks at Port Royal. Brett is just doing bigger things.”

Fred Vahlsing owns the black, yellow and white 323 and the main sponsorship on it as Vahlco Wheels is emblazoned on the back quarter panels which is a contender whenever it hits the track.

Van Horn is excited about this season and when reflecting on his career he explained, “I guess I am happy how it has gone. We’ve been consistent and maybe I didn’t get as many wins as I would like.”

However, the team will move forward with the eye on the target…the New Egypt and STSS South Series championships.