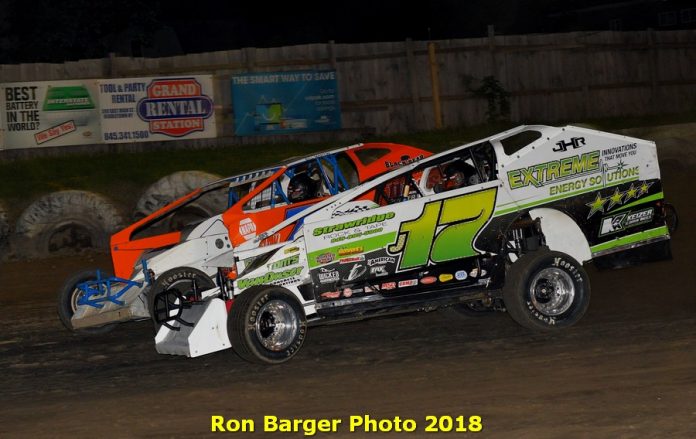 MIDDLETOWN, NY – In the 99 year history of Orange County Fair Speedway, only 3 other men have visited victory lane more than 50 times. Now you can add Jeff Heotzler into that club firmly. Heotzler picked up his 52nd career win at “House of Power” on Saturday night. Rounding out the top were Chris Schultz, John Lieto, and Gary Edwards Jr.

Heotzler used his pole starting spot to survive the 30-lap feature that was filled with action, drama and a late race caution. Danny Kronk and Bob McGannon brought out cautions on laps 1 and 3 respectively. From there on out it was a long green flag stretch of racing which allowed the field to fight it out amongst themselves.

With 16 of 30 in the record books, Heotzler found himself in lap traffic. Expertly dicing in and out of traffic aboard his J17 Extreme Energy Soloutions entry.

Meanwhile while Heotzler was leading the field, Jerry Higbie was marching forward from his 15th starting spot. Eventually, Higbie would finish 4th in the feature. There was racing all over the speedway as the drivers tried to get a grip on the tough racing surface. This marked just the second race on the newly installed surface.

Racing was delayed at the start of the night due to excessive water placed on the track. By race time the track was dry and somewhat slippery according to several drivers.

With 28-laps on the lap counter a final yellow set up a dramatic finish to the feature. As the yellow flashed on the speedway, Heotzler was involved in a jingle with Rick Laubach. The incident caused the front bumper on the J17 to be significantly pushed in but it had no effect on the performance of the car. The yellow was brought out for Craig Mitchell’s 93x which lost a water pump which tossed all his belts on the engine and caused the fan to go into the radiator spilling its contents all over the racing surface.

On the ensuing restart, Higbie pushed his way into 4th while Chris Schultz blasted his way to 2nd. In the end though, Jeff Heotzler did enough to score his 52nd career win.

“This car has been a work in progress now for four years. There has been a lot of work and effort put into this car.”

Heotzler went on to add, “between hitting the holes on the track and bending the J-bar, ripping off two shock towers over the period of two races, and then tonight running into the back of the field on the yellow, it’s been dumb luck.”

Heotzler finished up by saying, “I hope to be back here again more this year but it’s so tough to come from the back here at Middletown.”

Heotzler also debuted a new 358 entry owned by Bob Dini. The car features a radical design in the suspension and a very narrow sloped nose. It is definitely not off the shelf engineering.

Rick Laubach is going to call Orange County his home for the rest of the 2018 racing season on Saturday nights. “I’ll be here for all the big block shows” said Laubach. The Quakertown, PA resident has had a tumultuous few weeks in his racing career. With an incident a few weeks ago at Bridgeport Speedway in south Jersey, Laubach is looking for a fresh start and to put the incident behind him. Look for the team to bring his pole winning No. 8A Bicknell car that he raced at Oswego last year to Middletown next week…

Terminal motor trouble sidelined veteran modified pilot Steve Dodd. It was reported that the motor suffered some sort of failure in the valvetrain…

New engine builder for Bob McGannon in 2018. A switch from Pat Morrison to Billy The Kid was made. “I like Pat a lot but he’s a lot further away from me than Billy. This new motor has a lot of torque in it. So far I’m pretty happy with it” said McGannon…

If you watched the heats and you saw two Behrents sponsored big block cars, you were right. Veteran modified pilot Frank Jashembowski was a test pilot for the Jeff Behrent owned car. This is the car that Mat Williamson attempted to pilot at the Hard Clay Open a few weeks ago but suffered terminal engine failure. The motor was sent back to Clements Racing Engines in Spartanburg, South Carolina for repairs. This was the car’s shake down test before the upcoming STSS event at Outlaw Speedway…

Tommy Vigh Jr. will be piloting an ARCA car at Madison International Speedway on June 15th. The race can be seen on MAVTV. Vigh is a sportsman driver at Orange County…

For the first time since 2014, the Super DIRTcar Series will return to the “Hard Clay”. Fans who preorder fair tickets will receive free admission to the 100-lap $10,000 to win Oswego 200 qualifier presented by NAPA Auto Parts. The race is scheduled for July 19th…

Having a good seat underneath you is the key to being comfortable in racing. Pat Reiser discovered during the week that his seat was far from comfortable. The entire floor of his Bicknell chassis was cracked.

“Big Dom Roselli came over and rewelded the floor back in. We were looking for another car as we didn’t know if the car could be fixed,” said Pat’s car owner and father Doug Reiser. “We probably will get a new car from Bicknell as the cost of getting a used frame or a new is about the same.”

The car is a former big-block car that was used by Keith Flach at Lebanon Valley. Reiser is starting his second full season in the 358 ranks at Orange County…

After more than 50 consecutive years at Orange County, you probably have seen nearly everything. Richie Eurich the affable and well-respected veteran Modified driver has had his hands full with his new Bicknell chassis this year. It’s a new coil car versus a traditional torsion bar set up.

“We are writing a new chapter each week but at the same time we are reading it,” said Eurich who isn’t deterred by his teams struggles. “We will get it turned around. We’ve had lots of rain so a lack of seat time really hurts. We’ll keep digging.”

Eurich has a new primary sponsor for 2018 at Orange County. Van Grol Inc. For more information check them out here http://www.vangrolinc.com/