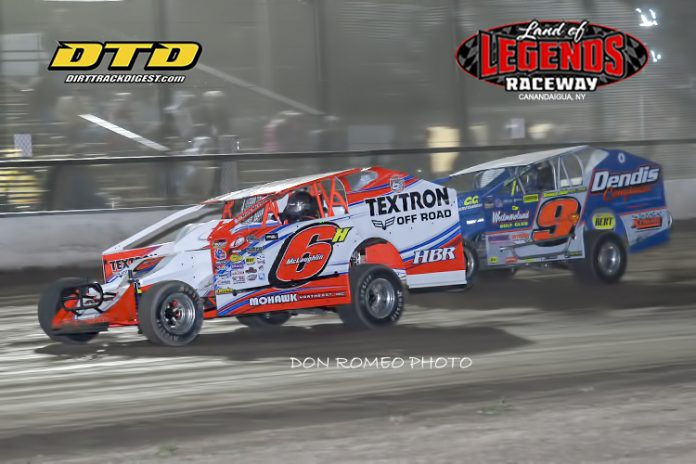 Max McLaughlin took the ride of his life on Saturday night at the Land of Legends Raceway, but talked to Dirt Track Digest on Sunday while awaiting the start of Modified action at the Weedsports Speedway.

A high speed accident entering the third turn sent the 6H flying over at least five times before coming down hard on his right rear.

Max said, “The 22 broke and I just couldn’t’ get out of the racing lane. They didn’t call the caution and it was a bit dusty. I didn’t see him and hit him hard. I started to flip, but I’m okay tonight though a little sore.”

In regards to the car he said, “It’s junk. The rear clip is junk. I think the only thing we are able to salvage from it were the motor and the seat.”

Max is anxiously awaiting his first exploits into the NASCAR Craftsman Stuck Series as he said, “I am really looking forward to Eldora”.

It is also anticipated that he will compete in some asphalt Truck events and prepped for that experience a few weeks ago.

Max noted, “I was able to run a late model at South Boston (Virginia) and it is a small, fast track. I got inside the top ten, but we suffered a mechanical failure. I just need to keep running asphalt shows as NASCAR evaluates what I am doing.”

However, he was back in action last night and will be competing this Friday night at the Brewerton Speedway in the second Super DIRTcar Series event of the 2018 season while hoping to improve his finish of second in the opener by at least one position.