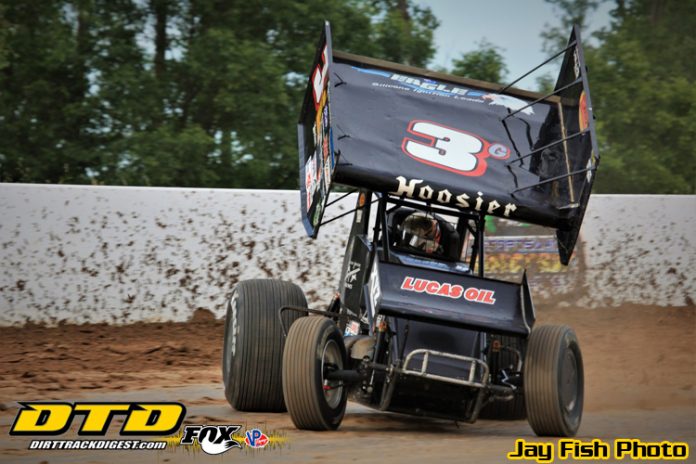 The majority of the All Star Circuit of Champions drivers were in unfamiliar territory when they hauled through the Weedsport Speedway pit gates for the inaugural show for the racing nomads.

However, when the night was over it was hard to believe that Californian Carson Macedo had never seen the track before as he not only adapted, but ran away from the field in the 35-lap feature event.

Macedo, in the Joe Gaerte owned 3g, strated inside the second row, but luck turned his way immediately. When pole sitter Brock Zearfoss went around in front of the field.  So the next time the green flew he went from the pole.

The victor said, “I really needed to get clean air out there in the feature and get consistent laps going. Traffic was tough and at times played a factor on the wing causing some handling problems. However, overall the car was really good tonight. It’s good night and we are happy to win.”

Reflectiong on the tightness of the tracks he explained, “Back home in California the tracks are small, but not slick like this. It’s fun to run new tracks and thus far we are having a good season sitting in fourth in All Star points going into the weekend.”

Runner up Paul McMahan accepted his fate graciously as he said, “I’m happy with it. A podium finish is good and even though everyone likes to win, I don’t mind being the first loser. I just couldn’t get the wing back far enough tonight and turns one and two are tricky running at the top here. We were a second place car tonight and that’s where we finished. This weekend I had a first, second and fourth so I can’t really bitch about it.”

Unlike the majority of the cars in the pits third place, Danny Dietrich has competed at the track with the World of Outlaws.

He started tenth in the field after finishing third in his heat. He noted, “I was disappointed in my heat and I let the dash get away. I was happy to get a third and you really had to go slow to go fast out there tonight. I like different tracks.  I just think that they make you a better driver in the long run.”

Fourth place Aaron Reutzel wasn’t very happy at the conclusion of the 35 lapper.

He started outside the front row, but got jammed up and damaged when Zearfoss went around on the opening lap.

Reutzel battled with McMahan for second place most of the race, but afterwards said, “The 3 (Zearfoss) tried to win the race on the first lap. The car just wasn’t there after that as we broke the Jacobs Ladder and I just couldn’t race the way I needed to.”

Probably the biggest comeback of the night came from Parker Price-Miller who was more than happy to finish fifth.

The night went from horrible to pretty decent as he explained, “In time trials the track was slick and I went into turn one too hard.” That resulted in heavy contact with the barrier and the first flip of the night.

Continuing he gave his crew plenty of credit.

“I had junked the car,” said Price-Miller “They guys got it back together for the heat and we started tenth and finished fifth. It got everything on the car except the frame.  I bent the rear end, front end, wing, brakes, drive shaft and torque tube, but we just threw something at it for the feature and it worked.”

Price-Miller explained the late race exploits as he noted, “From third to tenth we were all right there in the later half of the race. I had a lot of luck and the car was just very good in traffic.”