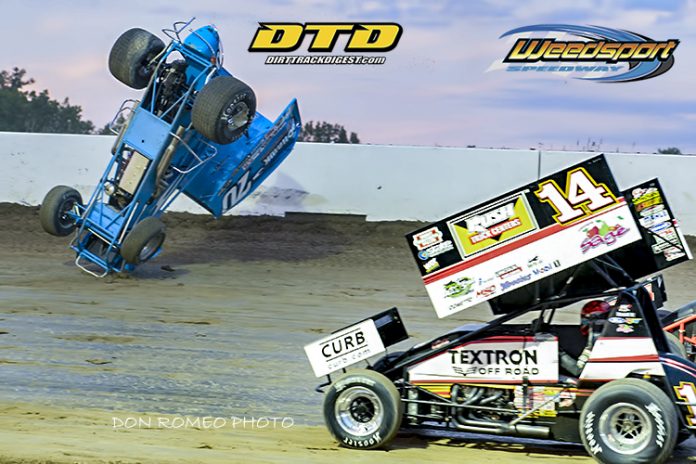 The inaugural All Star Circuit of Champions show at Weedsport hopefully was good enough to bring back as second edition in 2019.

Twenty-eight Sprint cars were joined by 23 Modifieds pit side at The ‘Port on Sunday night.

Many fans had come to see Tony Stewart who started 16th on the field and worked his way up to seventh. Smoke put on a show and the battle with local driver Larry Wight was fun to watch as they took turns sliding past one another. Tony settled for seventh, but that probably wasn’t a real disappointment to his fans.

Afterwards he stood alongside his trailer having his photo taken with fans or simply signing anything that was put in front of him. He stayed long after many people and teams had headed for home and did it with a smile on his face.

He has single-handedly kept this group alive and said, “I do it because they are all a bunch of good guys.”

He said, “I was really outside my element and never really been to any of these tracks before. I did race at Outlaw in 2010 in a micro, but that isn’t really translatable to a Sprint. This is a great series and I enjoy running with these guys. We just need to try to put a night together this weekend.”

Reflecting on the first two races he explained, “I set a new track record at Outlaw and Stateline, but on Friday cut a tire, went to the rear and got caught up in something and flipped. At Stateline I had a flat tire when they were pushing me off for the feature. We started dead last and finished in 12th.”

At Weedsport he sat on the front row and spun in front of the field at the start. He later noted he was done with a broken left radius rod, but unfortunately though he adapted well to three new tracks he had little to show for it.

Wild Child in the House

The legendary Jac Haudenschild was in the house and had second quick time, but faltered in his heat and had to win the B Main.

Surprisingly, he said, “I have never been here before.”

About his season thus far he said, “I have one All Star win, a local win and a few top fives. I’m a bit disappointed, but we are doing better.”

Looking at Weedsport before the racing started he noted, “It looks a bit D shaped and turn one appears tight.”

The layout probably wasn’t his favorite as he said, “I like high banked rough tracks.”

Of the memories he will always carry with him he said, “The big Kings Royals wins, the high speed at the Syracuse mile and California tracks like Calistoga that are heavy and rough.”

He said, “I didn’t think it was going to be the fast time and I just hoped to get in the invert. This track is unique. The first turn is so tight and the rest of the corners don’t match it at all. It was drying out there, but I was just trying to find where the moisture was.”

He is chasing the All Star crown explaining, “This is my first year on the All Star tour. I am a rookie. Point wise we’ve struggled a bit thus far and I had one non point win at Lernerville.”

Reflecting on his racing career he said, “I ran part time with the NASCAR Xfinity Series and K&N back in 14 and 15. However, I didn’t have the funding for NASCAR and Dave Jessup called me and asked it I would like to do this. Here we are and running full time with the All Stars this year.”

Larry Wight has raced at Weedsport numerous times and during the break early in the night said, “I missed the set up in the time trials and then we made a lot of changes. It was much better in the heat.”

In his heat were some top guns as he started sixth and passed Cale Conley, Jac Haudenschild and Chad Kemenah for third behind Justin Barger and Reutzel.

Continuing he said, “Anytime you can move forward in one of these it is a plus. I only get to run the 410 a couple of times a year.

Mitchell Wormall, the 21 year old from Perth, Australia, arrived in the USA last Friday. The team purchased the equipment last year and he keeps it at a friend’s house.

Mitchell said, “I am here racing until just after the Kings Royal. Currently we plan on a 23 race schedule.”

He noted back home, “Tracks are smaller than here, mostly 3/8ths of the mile and very wide. The format is so different here. We run two heats and you earn points to qualify for the feature. However, this track is different and I have not seen anything like this.”

The driver is here racing because, “It’s not the season back home (it’s almost winter).“

This sport is his profession and back home he needs to travel to race.

Perth is on the west coast and he explained, “There are just two tracks there.”

So he heads east co complete.

The regular field is around 20 cars in Australia except for some of the major events. He explained, “The Classic (at Premier Speedway) usually had around 100 cars.”

Mike Mahaney, who finished ninth in the main, got under Greg Hodnett entering the third turn late in his heat and the two cars spun with Mahaney actually sitting atop the 27 for a moment or two. Both rallied to qualify for the main. Hodnett ended up sixth on the night after starting 17th…

Carl Bowser destroyed the right front of his car after hammering the backstretch wall in his heat.  He did not return…

Dylan Westbrook was smoking heavily in hot laps as his crew later attributed it to an oil filter. He ran second in the consi to the Wild Child…

Dave Blaney got into Zearfoss at the start of the race.  Zearfoss spun up the banking in turn one.  Blaney clipped him and went for a wild ride.  He was uninjured…

Macedo was so dominant he won by 8.1 seconds…

Mahaney got Wight on the final lap for ninth…

Great crowd and a perfect night for racing.

Comments or anything else send along to foley395@hotmail.com