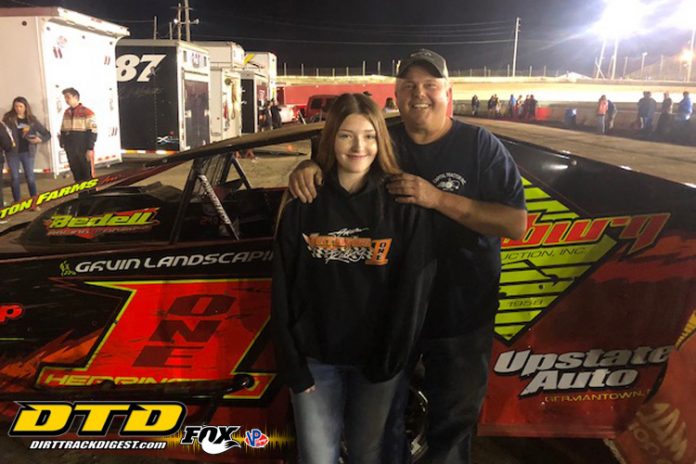 As many of you know Ed has two passions, auto racing and the other is the Choices program that he has been a part of for the past 13 years. Choices takes place in Altamont, N.Y., in a building where students from many Capital Area schools come to learn about the dangers involved with driving such as drunk driving, drugged driving, texting while driving, speeding, no seat belt use.

A few weeks ago a class from Tamarac High School came to the program and while Ed was speaking to the class he mentioned his connection to auto racing. After the class a young lady approached him and said her father was a racer. Her dad is Jason Herrington and Saturday night at Lebanon Valley we looked up Jason to get this photo of him and his daughter 13-year-old daughter Alexa. Jason told us how impressed Alexa was with the Choices program and that she got some valuable information from the volunteer speakers the day she was there. Ed was impress with how much she liked racing. If only we could clone her a few 1000 times to get more young people to the race track. Jason’s racing career has taken him from dirt to asphalt and back to dirt and when he won in the Budget class he heard boos and that bothered him. He said he just wants people to like him. Well we know one fan that does, her name is Alexa and she is his biggest fan.

Over the last week we have had a couple memorial races and also have had to deal with the loss of a great supporter of area auto racing leaving us all with heartache and remembering all in the same week.

We lost Bryan Goewey this past week. Bryan was involved in so many ways in racing for many years. He was instrumental in the beginning of the local TV show, Fox FastTrack, helped N.Y.S.S.C.A. whenever asked, owned many race cars and was a talented driver himself while also lending a financial hand to many racers over the years. Our prayers go out to the entire Goewey family. On Friday night at Albany-Saratoga the 5th Annual Mark Hughes Memorial race was run by the Sportsman division with the win and top three trophies going to Joey Scarborough, Tim Hartman, Jr. and Nick Lussier.

We snapped this photo of some of those that play a major part in bringing the event to the track each year. Dave Hughes, Chad Gregory, Megan Hughes and Jamie Brundige (too shy to be in photo). Long time racer Derrick McGrew is also very instrumental with support for the event each year. Tee shirts were being sold to supplement the purse for the memorial event, and according to Chad they pay down through the entire finish. Mark’s sister Megan holds a bake sale (not at the track) each year to also boost the purse for those who run the event. At Lebanon Valley on Saturday the entire Flach family, crew and fans took part in the 6th Annual J. C. Flach Memorial for Modifieds. Before the event, Brian Bedell read a statement of how much J. C. meant to him and to all at the high banks. J. C.’s dad did the prayer and the grandstands were lit up in blue glow sticks passed out earlier in the night. And then a sea of balloons was released towards the heavens. In the feature Keith Flach ran a very hard second to eventual winner Brett Hearn. The N.Y.S.S.C.A. reps in the trenches on Friday at Albany-Saratoga were Treasurer, Cheryl Catman and Board of Director’s member, Frank MacKay busy selling memberships before the features as it was N.Y.S.S.C.A. Award Night at the track. Winners of the money from the organization on Friday were: Four Cylinder Dual Cam, Steve Ryan; Four Cylinder Single Cam, Robert Garney; Sportsman, Joey Scarborough & Nick Fretto; Limited Sportsman, Dylan Bokus & Justin Buff; Modified, Brett Hearn & Ronnie Johnson and Street Stock, Randy Miller & Al Relyea. Due to a DIRTcar Pro Stock Series event on Friday in Canada the Safety Award Night for Pro Stocks will be held on Tuesday, June 12th at the Tribute Race.

Mike Parillo and Ray Sefrin the promoting team at The Ridge decided to try something different than their normal schedule. They added a $1000 to win Small Block/Big Block challenge. Some 15 racers came to tackle the oval on the hill and fans came out in what looked to be one of the largest in a long time for the track. Also on the card on Sunday were the Slingshots. The Sr. Slingshots raced for 20 laps for $300 and the winner was Bryce Cherko. Jr. Slingshot winner was Connor Hill. Other winners on Sunday at Glen Ridge were Rocky Warner in BB/SB Modifieds, Justin Knight, Pro Stocks, Derrick McGrew, Jr., Limited Sportsman and Four Cylinders was won by Andy Graves.

Those Fonda fans who know the Champion family know that they are dedicated fans that have organized memorial events at Fonda and have spent many nights in their seats on the patio of the historic grandstands at Fonda. Don and his son Craig also worked the gate during the Compani era. Currently the Champions are going through some trying times, Craig has stage four colon cancer and is spending much time in treatment. A fundraiser will be held at the Altamont American Legion Post 977 on July 8th, with raffles, music and food.