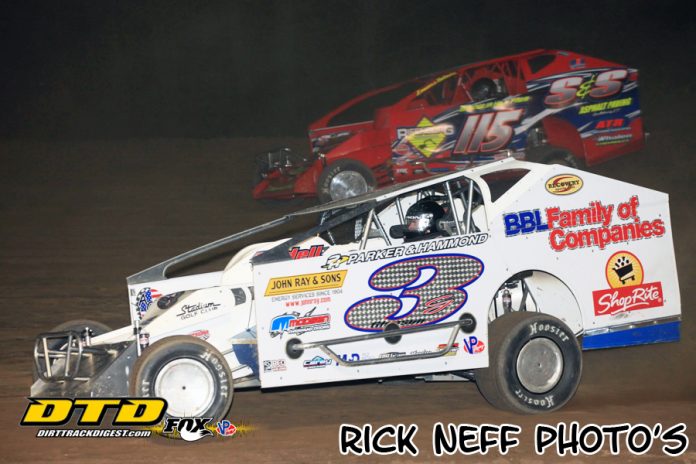 The draw wasn’t good for Kenny Tremont as he walked through the Albany-Saratoga Speedway gate on Tuesday night for the Jack Johnson-C.D. Coville Tribute Race.

He drew 45 out of 60 and knew that he would have his work cut out for him, but by the end of the night it really wasn’t all that bad.

Starting in the last row of his 11 car heat he passed nine cars to settle for second behind invader Brian Krummel and more importantly it got him in the draw for one of the top twelve starting spots.

He drew “six” which put him behind the outside line of outside front row Danny Varin and directly behind eventual winner Matt Sheppard.

During the first third of the race he wasn’t moving. Explaining his situation, Ken said, “It was too loose and I needed to adjust in the car to get it to roll the center. The key was you have to get the back to stick.”

Well, it worked and he started to move forward and worked his way up to second. However, it was no easy task as through the first 15 laps yellows kept the field bunched.

That wasn’t the case in the final 46 laps as green was dominant.

Tremont noted, “I really didn’t realize I was second until late in the race. I saw smoke from Matt the last five or 10 laps, but I couldn’t’ close in at all. I’m happy with second.”

In regards to the track even though it was dusty Tremont noted it didn’t play a role in his driving. Kenny explained, “It was a typical Friday night Albany-Saratoga track. Visibility was an issue and never cleared up until you got into single file. But there weren’t any surprises.”

Tremont said, “You come with the idea of winning, but I’m happy with second.”

He also indicated he really enjoyed the atmosphere at the show as with the quality of the invaders he said, “It just makes it better racing for the drivers and the fans. The quality car count improves the show and this was simply a great promotion. John Lakata did a great job putting this together.”