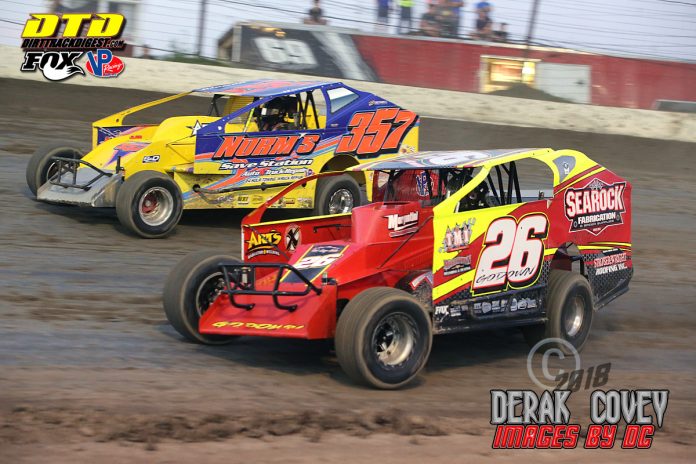 The cars and stars of the USAC “Eastern Storm” annual invasion set the stage for a thrilling 30-lap Modified main event. Ryan Godown used some experience along with a little bit of luck to get by Brett Kressley on a late restart to take the win.

Starting from the third position Godown battled with Duane Howard early on in the feature race for the runner-up spot as pole sitter Brett Kressley set the early pace. After finally securing the runner-up spot away from Howard the Ringoes, NJ driver set his sights on the quick running Kressley.

Godown was able to rundown the leader but the quick way around the 4/10’s mile dirt oval was on the bottom and unfortunately for Godown that is where Kressley was staying with his No. 19K. While most of the field was running on the bottom, 10-time track champion Jeff Strunk seemed to have found some bite from the middle on up as he made his way to the front.

After getting by Howard to move into third, Strunk looked to the outside of Godown to move into second. Strunk made his move going into turn one to go around Godown and by the time he hit turn three completed the pass. This is where the luck came in for Godown.

Before the lap could be scored the yellow flag was put out for a stopped car on the back stretch. This put Godown back to the second spot for the restart and this time Godown knew what he had to do.

“I was afraid to go up the track earlier in the race when I was behind Kressley,” mentioned Godown. “I was worried if it I went up there that I would lose some spots. After I saw Jeff go around me I knew there had to be something there. On the restart I stayed to the middle and there was some bite there to make the move. Once I got the lead I just stayed to the middle and the car just took off.”

Godown made his move around Kressley and once in front was able to pull out to a commanding lead to take the checkered flag. The win for Godown was his first win at Grandview Speedway in almost six years with his last win coming on July 3rd, 2012.

“To win here at Grandview is always special,” said an excited Godown afterwards standing beside his winning car. “The history here with Strunk, Howard and Von Dohren is second to none and to win here against those guys is just awesome. This Troyer TD4 car has been fast everywhere we’ve taken it and the Morgantini motor has been just as good. This win is for Diane and Steve Searock who put so much into giving me what I need to have to be successful. This is their first win here at Grandview and I know how much that means to them.”

Godown went on to talk about his No. 26 Troyer Modified.

“I have to thank Billy Colton for all he has done for me and the crew to get the new Troyer TD4 chassis dialed in. My brother and the rest of crew work hard to keep this deal going. This is my Big Diamond car so we weren’t sure how it would be here but it all worked out. Now we have to take it home, strip it down and wash it to get it back ready for Big Diamond tomorrow night.”

Starting on the outside pole, Howard had hoped to be able to grab the lead on the start and protect the bottom on a track that usually does not offer two grooves after the sprint car feature. The start of the race did not go as planned for Howard as pole sitter Kressley was able to keep Howard at bay and take the lead.

Howard bounced around between second and fourth during the 30-lap race eventually settling in to his third-place finish at the end.

“Believe it or not, the track was pretty good tonight, all things considering,” cited Howard. “We were just a little too tight and I could not get the car to rotate the way I wanted it. We’ve had some success in these Thunder on the Hill last year and I thought with getting a good starting spot we might be able to keep it going tonight. It was an okay night but we’ve been struggling here at Grandview for awhile now. I’m not sure what it is but we’re missing something.”

The quality of cars that didn’t qualify would have made a great lineup for a feature event at most tracks. Among those drivers that didn’t make the main event were Billy Pauch Sr, Ryan Watt, Mike Mahaney, Ray Swinehart, Danny Bouc and Matt Stangle just to name a few…

Jared Umbenhaurer returned to the track driving Mike Harvey’s No. 1H after his scary flip and fire last Saturday at the speedway. It was determined that the safety valve ball stuck open in the fuel cell which allowed the fuel to spill out…