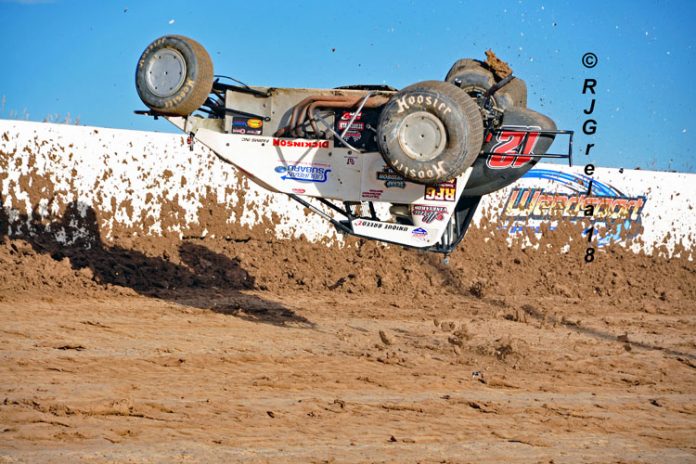 Robert Ballou was the hard charger in the Thunder on the Erie USAC Sprint Car race at Weedsport on Tuesday night, but when the event was over he talked to Dirt Track Digest about his emotions.

Ballou started the night off as he entered turn one on for the first lap of his time trial, bounced off the wall and went over hard.

His eventually seventh place finish from the 20th starting spot was noteworthy, but he wasn’t happy.

Entering the night Ballou was third in Eastern Storm points behind Chris Windom and Kevin Thomas, but only one point ahead of feature runner-up Tyler Courtney.

When the final points were tabulated Ballou finished fourth overall.

Known for his speaking what he thinks, Ballou said, “This was not the race track I hoped for. Ultimately they brought us here to be a second division to a track where it is normally not a wet surface. Then they put out the 3500 pound mud turtles and they balled it up to where it got rough and choppy. It was dead slick with big ripples.”

Continuing he said, “I really feel we could have used our wider tires to give them a better track and we could have smoothed it out.”

He had just loaded his damaged car in the pits before stepping over to talk with DTD.

Robert said, “I destroyed a car tonight. The frame was broken. We moved the motor to a back up car, but when I went out for the feature I discovered that I must have broken the butterfly injection so I went back in. When I came back out the car wouldn’t idle and well, it idled at around 4000 rpm’s. I raced off the kill switch and it worked, but at the end I was trying hard to get more positions and I just couldn’t’ get it to slow down.”

When asked about Easterh Storm he said, “Not bad. We ran the top ten every night. However, I feel the tracks were below average from previous tours. “

Ballou currently sits in fourth in the National Championship point race behind Kevin Thomas, Tyler Courtney, and Chris Windom.  Ballou will move forward toward the next race on July 6 at Lincoln Park Speedway in Putnamville, Indiana.