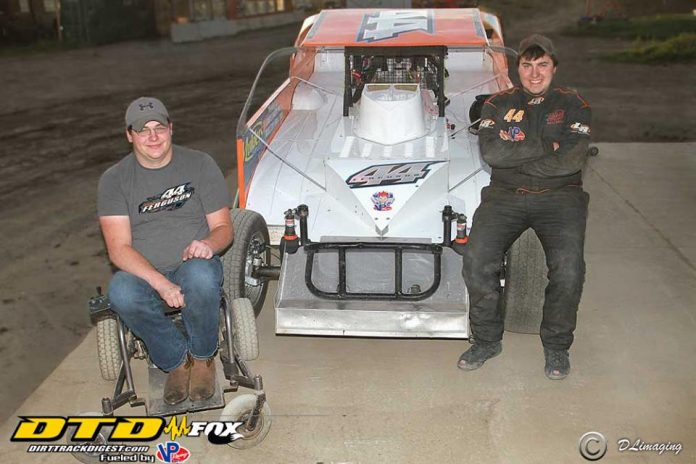 The Prescott, Ont., native has been racing since 2012 and was first introduced to racing by his father, Todd, and grandfather, Carl Ferguson.

For many years, Carl raced his car at the local speedway. The stories of those racing years mesmerized Johnathon as he was growing up, dreaming of racing his own car one day.

In 2002, at the age of five, Johnathon fulfilled part of his dream. With the help and support of family, he began racing in the Box Stock Kart class at the Brockville Speedway. He would later move on to race at the Cornwall Speedway the following year, providing the young race two venues to develop his driving skills.

A few years later, Todd began racing in the Sportsman Modified class at Brockville Speedway, with Johnathon helping out in the pit area at the track. Todd raced from 2009 until 2011 when he decided to hand over the driving duties Johnathon for the 2012 season.

Johnathon would finally fulfill his dream in 2012, driving his own racecar once Todd turned the reins over to the family-owned Sportsman Modified. Short into the season, Johnathon, now fifteen years old, took home his first win in the Sportsman Modified class at the Brockville Speedway.

The young driver would not visit victory lane for a number of years. This dry was not from the lack of trying as the young racer finished in the top five numerous times, but Johnathon always persevered and would work harder each and every time he got behind the wheel.

One factor, which helped to mold the team of late, was when Corey Jalbert, Johnathon’s sister Chelsea fiancé, began helping on a regular base in late 2016. “Johnathon convinced Corey to come to one race. Johnathon did so well that night, Corey has been coming ever since,” explained Elizabeth Ferguson, Johnathon’s mother. The working relationship has grown and the two along with Todd work well as a team.

This teamwork would shine throughout 2017 as Johnathon picked up 7-feature wins along with the track Championship at the Mohawk International Raceway. He would also claim the “Race for Cure” title at the Cornwall Motor Speedway. The team also finished third in points at the Brockville Speedway championship. Later that year Johnathon also won at the Brighton Speedway during Applefest.

The Team so far has been fortunate enough to win at least one race at Every Track they have competed at a small but gratifying achievement.

With all of their success in 2017, the team made the decision to race at the world finals in Charlotte, but within days of leaving, Todd had an accident, hospitalizing him. Johnathon made the decision to give Charlotte a pass, as he had to run the Family Business while Todd was in the Hospital in Winnipeg

2018 started off where the team left off from 2017, picking up three wins in a matter of weeks and, once again, is in the top three in points battle at the Mohawk International Raceway and Brockville Speedway.

This past weekend, car 44 was in a serious crash at the Brockville Speedway. During a restart of the Sportsman feature, Johnathon was caught in the crash in which the car took some heavy damage, but thankfully he walked away with no injuries.

This latest test has set the team back somewhat for the time being, but the team will regroup and be back in action once the car has been repaired.