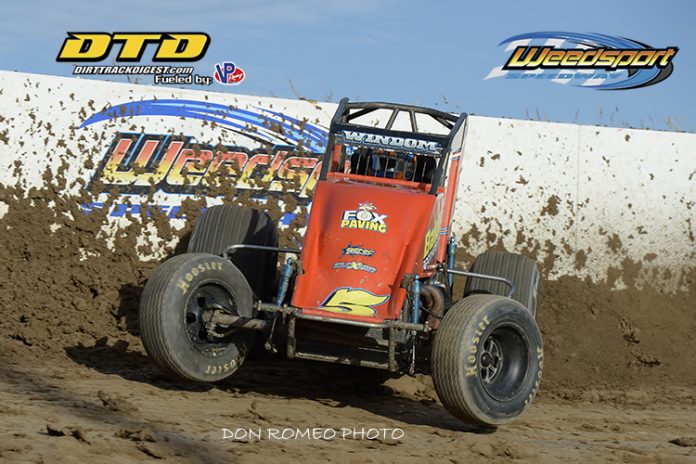 Eastern Storm is six straight nights of racing with plenty of travel and hours upon hours of crew member prep.

Chris Windom ended the annual USAC Eastern Storm journey as the champion, but in the end it was no easy task.

Entering the 30-lap finale at Weedsport, there was a one point difference between Kevin Thomas Jr., and Windom. Whoever finished ahead of the other would win the crown.

Windom started 10th and Thomas, whose team had replaced a blown motor, was seventh.

Chris said, “I know some drivers say they don’t, but I was keeping my eye on the 69 (Thomas) throughout the feature. All I had to do was beat him and I wanted to know where he was.”

It wasn’t an easy feature as Windom explained, “I got plugged up early and every move that I made was the wrong move. I fell back to 12th or 13th. I simply had to maintain my composure. I really feel I had a top three car, but I’ll take fourth tonight.”

Not only did the champ have Thomas to think about, but the track threw a curve at the team.

Chris explained, “This is the trickiest track we have run all year. Turn one is just so tight it’s almost like the track turns into a square. There really isn’t much room there and you just have to throw it in hard.”

However, Eastern Storm was pretty good as he said, “It’s gone about as good as we had hoped with two wins, two seconds and a third. We’ve had a podium finish every night.”

As he prepared for the night of racing Windom said, “This Eastern Tour is long. It wears on everyone especially the crew and the guy driving the rig.”

Even though he captured the crown on the smaller Weedsport track he noted, “I like the big tracks, the half miles. I’ve had a lot of success at those. Being able to win a Silver Crown and Sprint race at William Grove is special to me as I understand the tradition of The Grove.”

Chris Windom has come a long way in his career and the eye is on the prize.

He was at Indy this year and said, “Jonathan Byrd Racing gave me a shot in an Indy Light car, but unfortunately we crashed. We’ll do it again next year and eventually the 500 is in the plans.”

Starting as a go kart driver at the age of seven, working up to 600’s and at the age of 15 hopping into a Sprint Car the Canton, Ill., native now living in St. Louis is on a quest at the moment for the USAC Sprint Car National Championship.

The success of five of six top three finishes and nothing worse than fourth on the Eastern Tour could keep that momentum rolling for the 2018 Eastern Storm Champion.