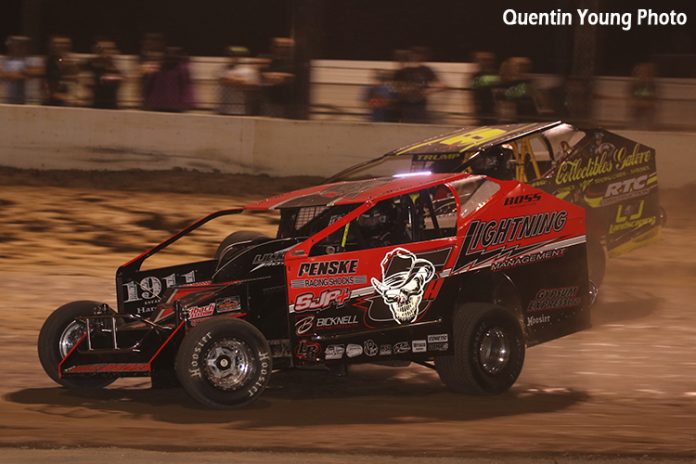 Friday night’s 35-lap DIRTcar Modified feature at the Brewerton Speedway was an all-out fight for the win.  Numerous drivers held the point as various times throughout the feature with Chad Phelps eventually getting the victory.  The driver who finished second, Chris Hile led some laps during the early circuits of the the event only to see Jim Witko slip by him on the bottom.  Eventually Hile’s night came to an end in the runner-up position.

“We’ll take it,” said Hile from his hauler afterwards.  “The car is nice and straight, but it is always a little bittersweet being the first loser.  It is what it is.  I would have liked to see the race go a little longer.  As the track slowed down we started to get even better.”

Hile started the race from the outside of the second row next to the eventual winner.  He used a restart on lap eight to slide up in front of early pace-setter Tyler Trump.  For him the top lane was the place to be with a heavy cushion all the way around the speedway.  Witko eventually proved otherwise as he took the lead from Hile on the bottom on lap 16.

“The cushion was so thick I didn’t think there was any way the bottom was going to be as good as it was,” cited Hile.  “I never really ventured down there until I saw him pass me.  At that point I knew I wasn’t going to pass him by following him so I thought maybe if I rode the top the bottom would go away a little bit.”

He added, “That is the problem when you are out leading you don’t know where to be.  It was a good run for (Jim) Witko.  It’s too bad he didn’t finish the deal off.  He was really good on the bottom.”

Phelps On the Podium AGAIN

Jimmy Phelps continues to chase a win, but the Baldwinsville, N.Y., driver’s consistency was on display again on Friday night at Brewerton.  Phelps rallied from the 12th starting position to get up to third.  He took advantage of two late race cautions to get himself in the fray with only a handful of laps to go.

“We are good right now,” stated Phelps.  “Tonight it felt like it never shook out until after about halfway.  It was a two lane track early with a lane on the top and bottom.  We had a pretty good car.  I think I sealed the right rear up early trying to run that top as long and as hard as I did.  I really regretted it, but the bottom was lane was plugged.  I thought at the end we came to life on the bottom.”

Phelps also put on his promoter’s hat Friday to talk about the USAC Eastern Storm event that was held at Weedsport Speedway on Tuesday night.

“I was really entertained,” commented Phelps.  “They put on great show.  They were really out of their element.  I think the foundation is there.  I know they indicated that they would like to try it again and we indicated that we would like to try it again.  We’ll work on doing a little bit more promotion.  It was tough.  We packed them in on the tail end of another big show.  They really didn’t get as much exposure on our end.  I thought it was fun night and the fans I talked to thought it was pretty cool so that makes it worth trying again.”

It looked like Witko was going to put his No. 24 in victory lane on Friday night only to have the late race caution cost him his chance.  He was disappointed with how things turned out.  He indicated that Chad Phelps got into the rear bumper on the final restart and that got him off his game.  He was also disappointed with the late caution.

“It’s weird that guys that normally don’t spin out had problems tonight,” he said.  “It was just bad timing for us.  Last year we got a win with a late caution and this year we had one taken away because of it.  I guess that how it goes.”

The DIRTcar Modifieds ran three heats for the 20 cars in the pits.  Gary Tomkins, Jimmy Phelps and Billy Decker were the heat winners…

Decker earned his win aboard the Jeremy Smith Racing No. 91…

Robby Bellinger made hard contact with the outside wall in his heat race after contact with Pat Ward.  His car was too damaged to continue.  Bellinger ended up running the feature event in Larry Wight’s backup No. 99L…

Ronnie Davis III and Willy Decker had their fair share of issues in the feature.  Davis brought out two cautions because of spins and Decker one of his own…

Mother Nature affected the conclusion of the program as one DIRTcar Sportsman feature and the Mod-Lites were postponed until a later date because of rain.