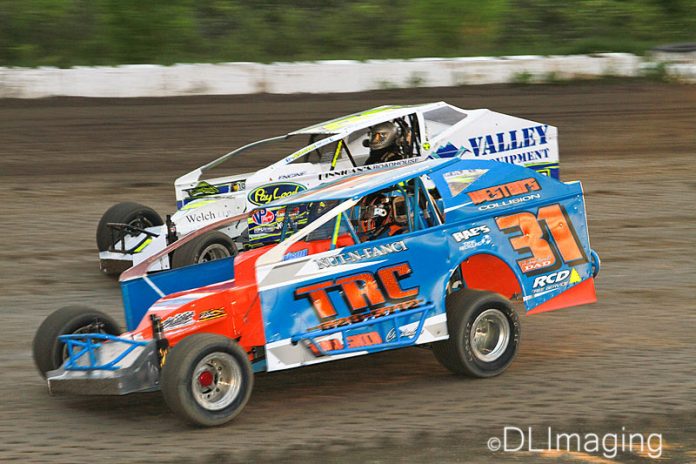 This past Wednesday, Tyler Bartlett produced his first major promotion of 2018 with a $5,000 to win Big Block/Small Block Shootout. With the track closing the next Friday for graduation weekend it was a good time to bring back the “Heavies” to LaFargeville.

With small blocks the mainstay at Can-Am it was interesting to A). See of the track regulars that would be there., and B) Would the invaders be bringing big blocks or small blocks? Can-Am has been table top smooth all season and on the slick side which could be conducive for 358 power.

Current point leader Billy Dunn came with 467 cubes under the hood as did, Tim Fuller, Erick Rudolph, Pat Ward and others. It was going to be a game of knowledge and choice for 50 laps.

Lance Willix lives a mere 10 minutes away from the famed oval. With commitments he runs Mohawk on Friday nights with his small block but welcomed the chance to come back home.

“We always enjoy coming back and seeing everybody,” Lance noted, “We were just hoping for a little bit better luck as we lost a motor here two weeks ago.”

That motor was the only one ready in the stable so Willix was quick to point out help that he got from north of the border, “I have to thank Bobby and Randy Herrington, this is their W16 under the hood,” Lance wanted to let everyone know, “If it wasn’t for them I would probably be watching from the stands instead.”

By virtue of finishing third, Willix was to start in fifth. The first 46 laps were under green and he did move up into fourth before the one and only caution. “The car was comfortable, I could run a good lane,” he said about his race, “I was trying to catch the guys (top three) in traffic but I would get a good lap and then they would get one.”

The restart however didn’t play into Lance’s hands, “I really didn’t want to see that last restart, kind of got you out of your rhythm,” he continued, “I was a little nervous coming here with the big blocks but the way the track was it was good. Come out of here in one piece and a nice top five.”

That top five (fifth) saw him as the highest finishing small block just ahead of Jordan McCreadie who he passed on the last lap to get back into fifth after the lap 46 restart.

Willix tried that big block thing for a few years but with his budget it just wasn’t in the cards anymore. He is glad to see small blocks trying to make a comeback with the addition of Fulton and Utica-Rome.

“It can only help, I am a small block guy now and I hope it grows,” Lance said on the future, “I am going to do the tour again as I really do like to travel, to go up into Quebec and stuff like that.”

As the Summer months approach it’s good to see a smile on this hard working individual who is seen coming to many a race with just his wife Raechelle. He currently sits in fourth in points at Mohawk and title would be..well..cool to see!