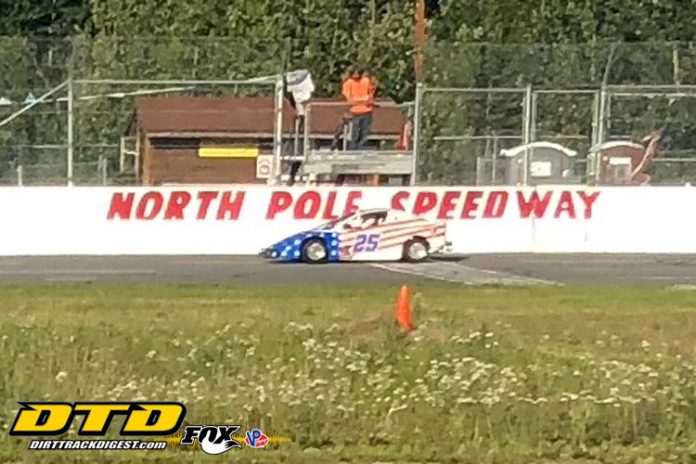 As race fans we have traveled many miles in the past 40 years and have visited many speedways across the country. This week we traveled some 4200 miles to visit our new great-granddaughter and her parents in Alaska. Our grandson is stationed with the Air Force there. After arriving on Wednesday night about 8:30 pm at our hotel in North Pole, Alaska we wanted to collapse but the constant daylight is difficult to adjust to and you don’t know when to stop.

We’ve been doing tourist things and along the way also found two race tracks, North Pole Speedway a 1/4 mile asphalt oval that we first thought was closed but when we took a trip there we found that they were running that night, Thursday. The track is run by the North Pole Racing Association and one of the members was there doing some mowing. Al Trettel was busy but very welcoming and open the gates so that we could walk the track.

“We don’t have many cars anymore, said Al but we still come to race. The mud bog events is what keeps the place going.” He invited us back for the nights racing and said we would see four time Iditarod champion, Lance Mackey racing his Legend car. Although we did fall asleep trying to catch up from the long flight we did get back to the track to see the final event.


We also met Lance Mackey and his two year old son. Lance enjoys auto racing as a hobby and said “I would come if there were only two cars.”

There was only seven cars racing that night, three Legends and four Bandoleros and there were a few fans in the stands. The folks there that night did not worry about car or fan counts the were there to race and enjoy it.

On Friday night we took our grandson David and made a short trip to Mitchell Raceway, a 1/4 mile semi-banked dirt oval just west of Fairbanks. We decided to go as fans and sit in the stands. Once again there were a limited number of cars mostly because this night the Sprints had taken the night off. It didn’t seem to matter to the fans they were truly enjoying themselves and cheering for their favorite driver. The heats were 15 laps and all features were the same. Some frequent visits to the track by the water truck seem to keep the dust down and the wind was blowing away from the stands. The divisions at Mitchell are Modifieds (IMCA style), Sportsman (similar to our Pro Stocks), Dollar Stocks ( similar to Street Stocks), Mini Mods and Mini Stocks self explanatory.

Before we left for our trip Ed was at the Big Show 10. Ten years ago Brett Hearn decided he would try his hand at promotion and held the Big Show at Orange County Fair Speedway. The event has since moved to Albany-Saratoga and Tuesday night fans got to enjoy the 10th Big Show. The show was a hit with everyone we spoke with and there seemed to be something for everyone.

NASCAR racer and racing commentator, Kenny Wallace was on hand for autographs, photos and he also raced a specially prepared TEO Pro car, No. 36. Bobby Hearn was on hand to help with the car and Wallace pitted along side Brett in the pit area.

Also on hand was Gary Balough and his famous No. 112 Batmobile. Gary was there to promote and sign his newly releases book, Hot Shoe, A checked Past, My Story. When we asked he said the book is going well and they are looking at printing more. Set up next to Gary was Allison Richie, family and crew selling T-shirts to benefit Alzheimer’s. We snapped this shot of Allison & Gary as they seemed to be in deep conversation. We will have to watch to see is she got any driving tips from Gary. There was also a table set up for all the top DIRTcar drivers to sign autographs for the fans.
Music filled the air throughout the night and there was no down time just a minor light problem that was fixed immediately.

There was a great field of racers on hand, 56 Modifieds and 60 Sportsman. In both divisions the fans were treated to great racing. Even a surprise ending to the Mod feature. After Matt Sheppard led for 95 of the 100 laps a mishap allowed Stewart Friesen to get by and take the win. In order to get everyone of the Sportsman into the show the field was split in half after qualifying and two features were run with Jeremy Pitts taking one of the wins and Chris Johnson the other.