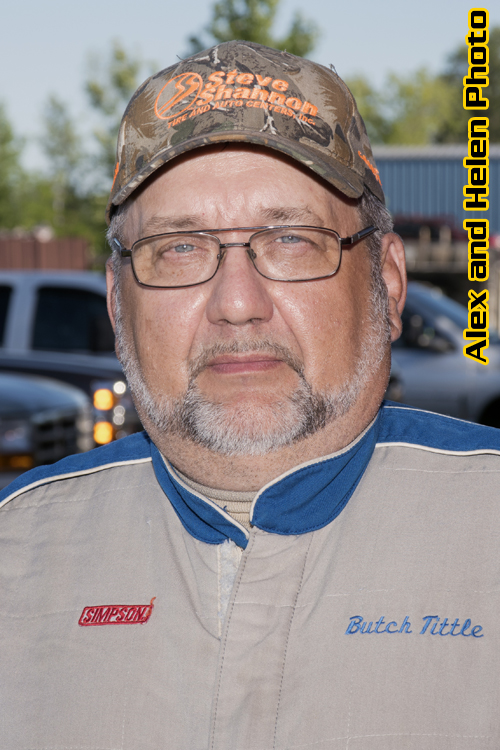 Butch Tittle was once a regular fixture at tracks in Central New York, but the 64-year-old driver, whose career has spanned 46 years, has made reappearance in 2018.

As he sat in the back of his hauler at the Brewerton Super DirtCar Series race the veteran talked to Dirt Track Digest about a wide assortment of subjects including many things that today’s fan might not even be aware of.

The Saylorsburg, Pa., driver said “Rusty Smith wanted me to start off the year with him as he wanted to go to some places he’s never really raced at before. He lives in Bethlehem, Pa., and entering tonight this is our fourth race as we’ve also been at Weedsport and Bridgeport.”

Continuing he noted, “I guess to be 60 years old plus and have the opportunity is great. I still think I can do it and you know what I don’t know what else I would do otherwise.”
On top of that his eight year old grandson Christopher, in his own words, “unscrews tires” while Title’s son Ryan does quite a bit of the mechanical work also. Looking at where he is today Butch said, “Rusty came up with this idea. It was never in my plans. He wants to race more and we’re both in our 60’s. We’ve been a lot of places, but we want to go to more new tracks.”

Reflecting on the field at Brewerton he said, “It can be overwhelming as running the series can be a tough deal.”

He had memories of Brewerton and said, “I had a second place here back in the 90’s to J.J. Michaels and ran in the top ten here.”

In 1972 Butch Tittle started what has turned out to be a nearly half century racing excursion.

Looking back he explained, “I was at Nazareth in 1972 and West Armory N.J. as well as Middletown. Earlier on in the 50’s and 60’s my uncle had cars and he brought a black ’37 Ford sedan to the track and didn’t have a number so a guy had a bucket of white paint and swabbed ‘Z’ on the car and that’s the way it has been ever since.”

Continuing he said, “When I finally started racing we ran at Dorney Park, Nazareth, Allentown (Fairgrounds) and Flemington and we always had the ‘Z’ on it.”

In talking with Tittle you quickly learn there is much more history in his life than you could imagine.

He said, “Over the years I’ve had several top tens in big blocks and followed the tour in the late 90’s. Back in ’01 I remember at a series race I timed sixth and Floyd Decker walked over to me and told me how happy he was for me. I really didn’t have half the equipment those other guys had. “

Talking about the old days of the tour he mentioned, “We had Troyer cars that were two years old before we went to Teo, the big-blocks and small-blocks ran together. Small-blocks could run the drag tires.”

Butch said, “When I got thrown out of Penn Can I came up to Brewerton and Harvey Fink and his wife treated us so great that I just kept coming back here. I probably said too much over the years to get tossed out of places, but I just believe that when a driver comes into the pits it all starts as zero and the officials forget about the names. I hated favoritism and I guess I got myself in detention or expulsions because of my feelings and actions.”

Robert “Butch” Tittle Jr. is one of the throwback drivers who have a colorful, interesting history, but he simply wants to keep racing.

In regards to his approach today he simply noted, “We go all out in the hot lap (timed groups) and try to get a good lap or two. If we don’t make it then we will sit back, watch and enjoy it.”