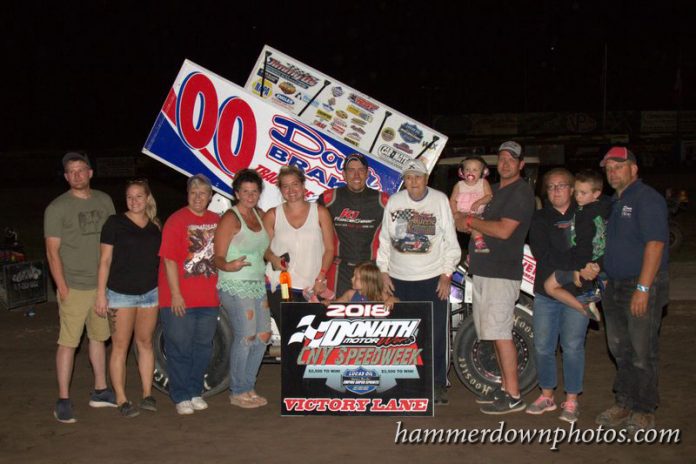 The final driver of this year’s ESS CNY Speedweek Featured Driver Series is none other than the now-two-time champion, Danny Varin. After posting a win in the Wednesday night opener at Can-Am Speedway, Varin followed that up with three more top-five finishes to earn him consecutive Speedweek titles.


Danny, now 29, began his already-lengthy racing career at the age of 13. His father Bobby’s car owner Roger Heroux gave him a practice session in a Big-Block Modified after a weekly show in 2003 at the Utica-Rome Speedway; Danny’s first taste at real speed.

“Growing up around my father sucked me right into the sport, and he and Roger gave me my first opportunity to drive,” Danny said in an interview. “I don’t know what I’d do on my weekends without it.”


This transpired into Danny’s first full-time ride in a dirt modified. Heroux set him up in the sportsman class for the 2004 season, which, unfortunately, lasted only half of the year.

The following year, Danny was offered a ride with longtime Sportsman car owner Charles Tibbits for a Sportsman campaign at Utica-Rome and Fonda Speedways. He scored his first win at Utica-Rome in these years, as well as four additional wins before making the jump to Big-Blocks in 2008 with car owner Ed Monger.

Danny drove the familiar Magsarus No. 93 at Fonda for only one year, before joining back up with Tibbits in a Small-Block Modified for the 2009 season. Destination “Dover Dave” Cruickshank and the Dover Brake team would be up next for Danny, racing a Big-Block again at Fonda and Utica-Rome weekly for the 2010 and 2011 seasons.

The Magsarus ride opened up once again for Danny in 2012, after parting ways with Dover Dave at the end of 2011. Since then, the Monger-Varin partnership has been solid, as Danny still drives Ed’s car in 2018.

Cue Varin’s fifth car owner, Danny Cuomo. Cuomo had previously talked to Varin about getting into Sprint Car racing, which Varin said he never actually considered doing at the time. But the two joined forces and went CSRA 305 Sprint Car racing in 2012. He remained with Monger and Cuomo through the 2014 season and decided to make the jump to the 360 division full-time for 2015, also pulling double duty with the Modified. But these opportunities did not come without their struggles.

“We were great in the 305s and I felt like I really had a good car, but when we went to the 360s, I really started to struggle,” Varin said. “I didn’t have the feel of the car that I wanted. I just wasn’t on the right page with everything.”

Danny decided to consult the experts, linking up with longtime P.A. Posse member Freddie Rahmer for advice on how to handle the new horsepower. He also got in contact with ESS veterans like Chuck Hebing and Jason Barney to assist him with the learning curve. Becoming a first-time car owner was also new to Danny in 2015, even with the VRP Shocks and Dover Brake backing. It was a test of his ultimate fortitude, but it shaped him into the frequently competitive Sprint Car driver he is today.

The 2017 season brought about the most success Danny had ever seen in a racecar of any kind, winning seven Sprint Car races and a CNY Speedweek title all in the same year. A true breakout year for the Fonda native set up an indefinite schedule for 2018, running only major events in both the Big-Block and Sprint Car.

Since his success in the 360 division, Danny had envisioned moving up even further from there, into the 410 ranks. The team decided to take the opportunity in the 2017 off-season to put together a working 410 car for 2018, which they ran only twice before suffering engine failure on the track, placing that program on hold for now.

In his foreseeable future, Danny said he plans on trying to race as much as possible in Sprint Cars, possibly picking up a full-time 410 ride. Or, at least, he’ll race as much as his business involvement will let him.

“Business is really picking up at the Supply Wagon store,” Danny explained. “It’s almost getting to the point now where it’s either go racing or go working.”

Outside of the racetrack, Danny’s grandfather Bob owns Supply Wagon Rentals; a business started in 2008 that rents heavy equipment, portable toilets, large tents and other various party equipment to those around the Eastern New York area.

But for now, Danny will continue his 360 Sprint Car and Big-Block Modified careers in the state of New York, making time for his new 410 operation when it becomes available again. Look out for the now-two-time CNY Speedweek Champion to become even more involved and competitive in the future.