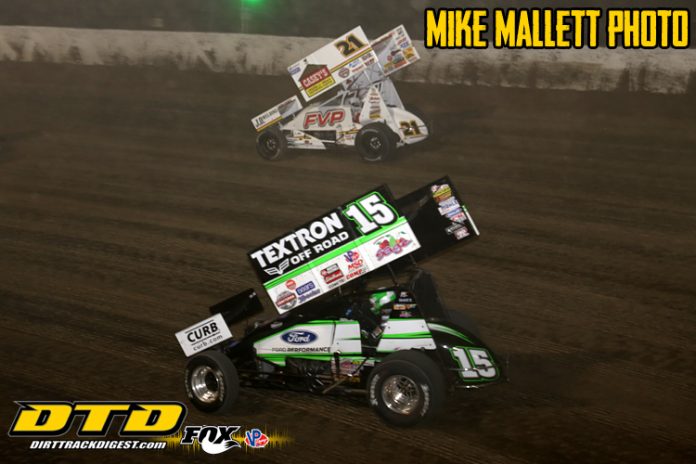 Friday night at the Eldora Speedway Donny Schatz again proved why he is the best Sprint Car driver in the country. The Fargo, N.D., utilized the middle lane to dominate the Knight Before the Kings Royal for the $12,000 victory. While everyone else on the speedway was using the high or low lane, Schatz parked his No. 15 in the middle groove to dominate the 30-lap main-event.

For Schatz running the middle was the logical choice. He went down to the bottom and didn’t feel comfortable. He tried the top for a lap before settling into the middle. That was definitely the right choice as he ran away with the win.

“The bottom, you could come through there one time and there was something there and the next time you’d miss it,” commented Schatz. “If you look back at the history the dynamics of this race change. We won it last year on the bottom but Christopher Bell was coming on the top. You got to move around. Sometimes you are in the catbird seat when you are running second, but when you are leading doing things in lapped traffic you got to be somewhat smart. I think my car was best in the middle. Not many guys were there. That is always a good thing. If I had to get up on the top and beat it I could. It is not really my bag of tea bouncing off the fence but I can do it. Tonight, in just a regular show, it’s not that much of an important thing. Tomorrow night, for $50,000, your damn right I’ll do it.”

Although he picked up the win, it wasn’t all easy for Schatz as his race nearly ended before it got started. Schatz made a couple of mistakes early. One of those mistakes saw his car slide across the track and actually catch the outside wall off of turn two. Fortunately for him it didn’t do severe damage or suck him into the wall.


“The first 10 laps really don’t mean anything, you just don’t want to put yourself going back,” cited Schatz. “I did put myself in a bad spot. I was sliding across one and two and slid right up into the fence and caught it. Luckily I got on the gas quick enough before I swung the frontend back in. I don’t know if we did much damage, probably not. These guys build a pretty solid race car.”

With Schtaz dominating the feature, Greg Wilson was charging from 14th into second and chasing Schatz at the end. Wilson was working his No. W20 right around the inside rail. Afterwards Schatz was made aware of the charge put on by Wilson. He knows he’ll have to be better on Saturday night if he wants to win the big money.

“We tried a little something in the dash to try and get ourselves better there and it worked,” mentioned Schatz. “Obviously, at the end of the race, they said Wilson was coming. Greg is really good when the track is like that right on the bottom. I had to do something to keep my speed up. I did what I thought was right. I got to traffic and it took me a little bit to figure out how to adjust my car. I got the 44 (Trey Starks) and it took me about five or six laps to get around him. I had to make a little adjustment. We got something to work with now. Last night we didn’t feel like that. Tonight, even though we won, there was probably a faster car on the race track and tomorrow night is 10 laps more. You got to be a little bit in fuel conserve mode too.”

While knowing he needs to be better, Schatz is ready for the challenge as he goes for his fifth Kings Royal title and record third consecutive. Last year he became the only driver ever to win back-to-back titles.

“If I do everything right, keep the car underneath me, there aren’t many people that are going to go by the 15 car,” said Schatz afterwards. “One of them was the guy in second. The W20 is just really good when the track is like that. He’s been struggling a lot lately so I know how hungry he is to get a win. They say he was coming at the end. We were kind of floating. I know we need to be better for tomorrow night if we are racing in those conditions or he’s probably going to kick our ass.  So that’s what this game is. That is why we are here. Hero one day, zero the next. We enjoy the racing, we enjoy the competition, he pushes us to be better and we push him to be better and that’s what we love about it.”

Schatz is undoubtedly the odds on favorite on Saturday night to capture the 35th running of the Kings Royal, but can Wilson find enough to get it done or can someone else figure out a way to take home the crown?