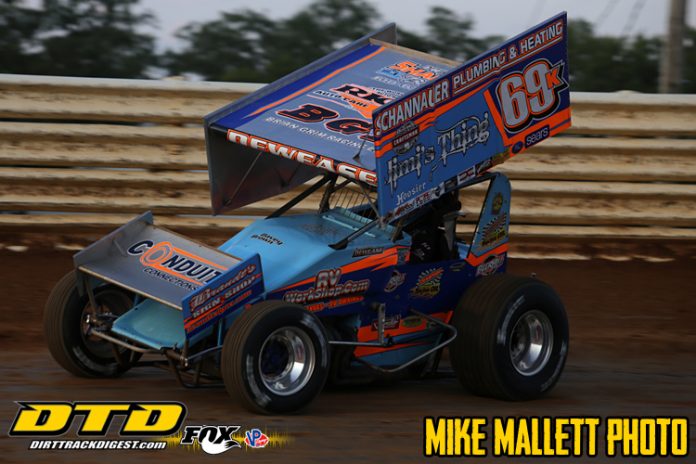 It should come as no surprise that Saturday night there was another high-dollar Sprint Car event in Central Pennsylvania that was won by the ‘Dream Team.’ This time the team of car owner Don Kreitz Jr., mechanic Davey Brown and driver Lance Dewease walked out of Port Royal Speedway $12,000 richer after dominating in the Living Legends Dream event.

“This means everything,” said Dewease after the win. “That is what we are here for, to try and win these big races. To try to do the best we can. We had a pretty good car all night.”

Dewease, who started on the outside pole, took only 12 laps to take over the race lead. Dewease tracked down Danny Dietrich to make the pass in traffic.

“I knew he was going to be tough,” cited Dewease of Dietrich. “He gets around the top really, really good. When I moved up behind him I could run his pace so I thought we would be okay there. He had to go down and I knew he was going to slide across. I knew I could run that bottom there. If I could hit it like I did in the qualifier I knew we could make time. We hit it good.”


At that point Dewease did what he’s been doing as of late, he set the cruise control and drove away. He was flawless in traffic even though he didn’t feel all that good. He had enough to stay out front for his second victory in the event.

“Once I got to them after a while I felt like they were a little better than me,” he said of the traffic. “I was worried that somebody would catch me. When it is this slick it is so easy to mess up a little bit and break your momentum. We were fortunate enough to get by the lapped cars.”

It wasn’t for lack of effort that Danny Dietrich finished second on Saturday night. Dietrich’s car was good over the first third of the race but once the top went away he was a sitting duck. He just couldn’t run the bottom like he needed to.

“We are slowly catching the ‘dream team’ over there,” joked Dietrich. “We aren’t there yet, but we are learning a lot. I just want to be able to race with them longer. If we had a top in three and four I think it would have been a hell of a race for the fans, but I think once the top went away I was trouble and I knew it. I’m not going to complain. We led for 10 laps and that’s better than we could have done a month ago.”

Brock Zearfoss had made his way around Dietrich around the midway point of the race only to lose the position on the final lap as Dietrich drove back by. Zearfoss indicated that part of the reason was that his fuel cell was beginning to run dry. He held on to finish in third.

“We were really good there in the feature,” stated Zearfoss. “I thought about battling with them for the lead there early. We were right on them. I decided to save my tires a little bit. Glad I did because I was starting to run out of fuel there with four to go. It started sputtering getting into one. We had a little trouble dealing with them lapped cars. While doing that I was trying to conserve as much as I could to get to the end. Danny was running the bottom there and made some good time on me. I got caught in the middle there a few times and allowed him to gain some ground on me and he ended up getting there on the last lap.”

Logan Wagner was fast timer on the day with a lap of 16.250. James McFadden and Dewease won the pair of 15-lap semi-features worth $2,000. Rick Lafferty won the B-Main…

Kody Lehman and Nicole Bower were added to the 35-lap feature via a fan vote.

Prior to the start of the racing action, Greg Hodnett was honored as the 2018 Living Legend.  All of Hodnett’s former Central Pennsylvania car owners were on hand to honor him.  As part of the ceremony Hodnett received a life time pass to the facility.