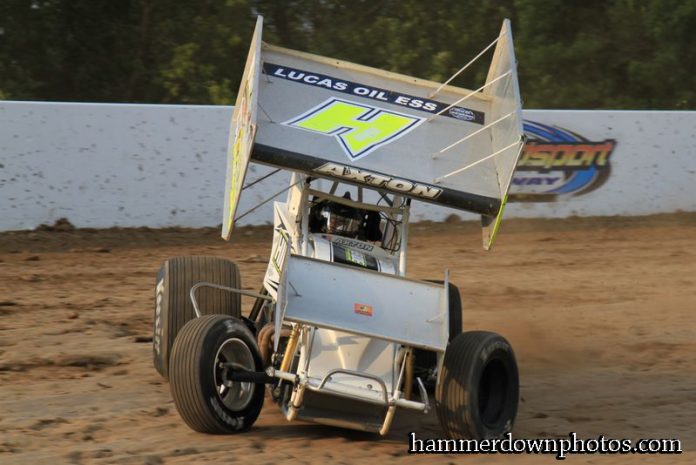 Dave Axton is a 360 Sprint Car regular who found himself in a unique situation on Sunday night.

The World of Outlaw Sprint cars invaded Weedsport Speedway and Dave said, “I was going to watch a movie and then watch the race on the computer.”

However, that never happened.

The Port Byron resident is just five minutes from the track and a situation had developed that was a bit different.


The World of Outlaws have number of car formulas and they needed a 21st car. Twenty were pitside and the Outlaw officials contacted Empire Super Sprints Dean Reynolds wondering where all the 360’s were. Reynolds explained that it had been several years since those teams tried to compete with the travelers.

However, they asked him to find a car. So he dialed up Dave Axton.

Axton said, “It was 5:15 and I was done working for the day. I was sitting there watching a documentary on the African Cheetah which was pretty interesting and trying to decided what movie we wanted to watch next. They called and said they needed a car. I was loaded from the night before so we went down. It’s only five minutes away.”

Continuing he said, “I have to admit running a World of Outlaw show has been on my bucket list, but I wanted to do it the right way and I wanted to do it in the right situation. The guys had to really thrash on the car as we needed their right rear, which they gave to me, and I needed to get the tethers on as well as they run a flat wing. There is also a special bead lock cover you need.”

So he came and went racing. After Donny Shatz hit the wall in time trials, Axton said, “Hey at least I beat Schatz in time trials.”

When the night was over he had cashed in over $900 and said, “Maybe I’ll quit my job and run with these guys.”

To which his wife uttered, “And I’ll look for a divorce lawyer.”

It was all in fun as this small team who had absolutely no intention of running with the World of Outlaws had a better than decent night.

Dave Axton finished in 21st position, but that was absolutely okay with him and his team.

However, he’s has to go back and find that Cheetah move to see how it ended.