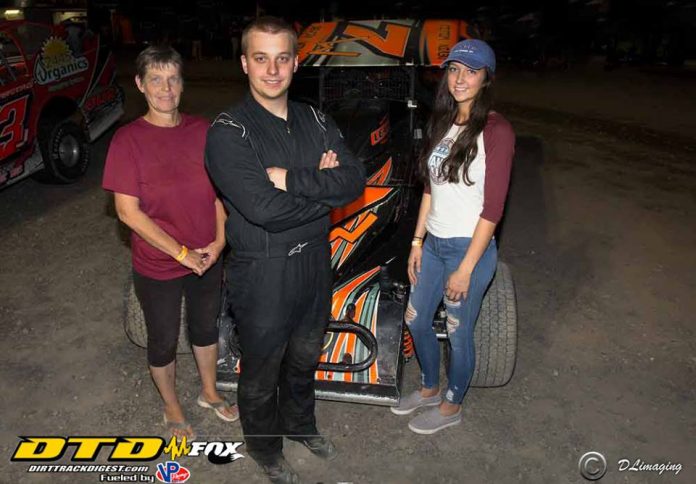 The backbone of DIRTcar racing today, as in the past, is still the small family-run team racing each week on limited budgets, but still managing to get great results.

One of these teams running in the Northeast fits this mold to a tee.

Devin Willis from Chateaugay, New York, runs three times a week at one of three local tracks with a crew of two, his mom Delma and his girlfriend Mikayla Marlow, but  from time to time if Delma cannot make the race, Curti Lamere steps in to fill the void.

Devin, from a racing standpoint, just fell into the sport by some unfolding circumstances.

As Devin was attending Clarkson University, one of the other students whom he discovered had a similar interest in Motocross racing, began a friendship as they both had a common bond in racing. This student was none other than Mike Maresca.

As time passed, the two continued racing Motocross until Maresca decided to move onto DIRTcar racing.

Devin, however, continued to race in the Motocross ranks until he began realizing injuries in this sport were very common and may pose a conflict with work if he were sidelined by a racing injury. Devin made the decision to quit Motocross even though he loved racing and sold all his motocross equipment.

At the same time, Mike Maresca was selling one of his older racecars, which caught the eye of Devin, and the rest is history.

In the early days of August of 2017 with some help at first from Mike and the sponsorship of St Lawrence Radiology, Devin began camping his number 7W, a spin-off number from his friend Mike who runs the number 7 car.

The plan was to run in the Junior Sportsman class at Utica Rome, and Fonda Speedways along with his home track at Mohawk International Raceway for the remainder of the season.

Within a few weeks, Devin won three races in a row in the Junior Sportsman class.

With great results within a short time, Devin moved up into the Sportsman Modified class to cut his teeth in the very competitive class preparing himself to campaign the car in this premier class in 2018.

This season and the move up into the Sportsman rank has proved challenging for the young 23-year-old driver.

As the season progressed, Devin was definitely showing that he was one of the front-runners at the Airborne Park Speedway in 2018, a new track for him this year.

Just a few weeks ago Devin picked up his first win in the Sportsman class at Airborne Speedway and is striving to finish in the top five in points this year.

Mohawk, Raceway and Cornwall Speedway have proved a little more challenging, with Devin currently in 10th place in points at Cornwall. Devin explained, “We are working very hard to find the right set up for both Cornwall and Mohawk which are both different in every way. We think we have things fairly good at Airborne currently, all we need there is a little more consistency and luck.”

With the 2018 season, now past the mind way point, Devin is working hard each free minute on the car,  “its difficult juggling work and racing “ Devin explains  “but, I’m hoping to get at least one more win this season at the Airborne Park Speedway”.

This small family’s efforts, racing weekly, demonstrate that it does not take an unlimited budget to be competitive  — obviously hard work and dedication is paying off.