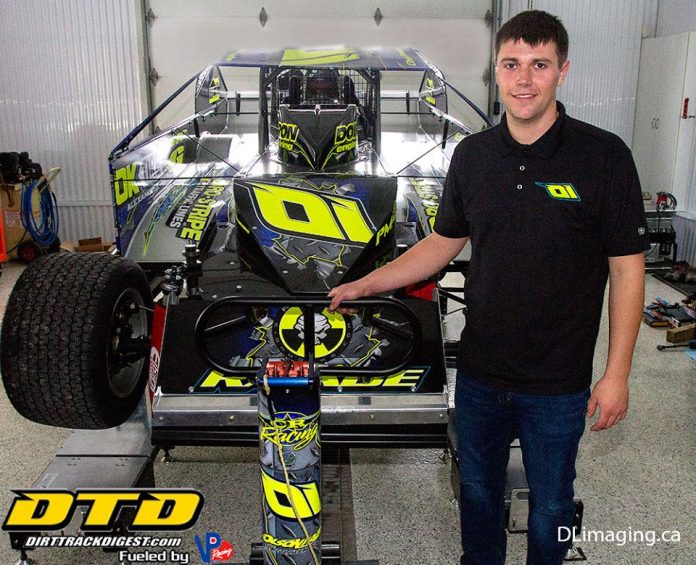 The Chris Raabe team had an up and down month of racing in July, picking up another win at Mohawk International Raceway along with a hand full of second-place finishes. There were, however, a few poor results along the way for this small team from Alexandra, Ontario.

Yes, the team managed to win another race at Mohawk International Raceway, but it was the solid second place finish at the Super DIRTcar Series race at Cornwall Motor Speedway that Chris is most happy about.

“We had a great car throughout the night at Cornwall and to come home .37 second off the leader Matt Sheppard was just an amazing result. If I had just a few more laps, I’m confident that we could have taken home the win, but we just ran out of laps in the end. Still, it was a very good result for our team,” Chris explained.

The team did have a few hick-ups along the way with two DNFs due to incidents on the track that forced Chris to retire early from the race.


“It has been a tough month on parts,” said Chris. “Being a small budget team, we have to use what parts are still available and make do.”

The team was also down to one motor by mid-month, forcing them to try and preserve their last motor and still aim for the best results possible to maintain their points standing at Mohawk, Airborne and Cornwall Speedways.

Chris is looking more optimistic for the last portion of the season.

“Our new motor is in and some much-needed parts so we can race a little harder now knowing we have a good supply of spare parts.”

The team is also gearing up for the 358 DIRTcar series to resume in August.

It will be an interesting few weeks ahead as both the DIRTcar 358 series restarts along with the regular track point’s chase. This should provide this veteran driver the venue for picking up another win, along with some needed points.