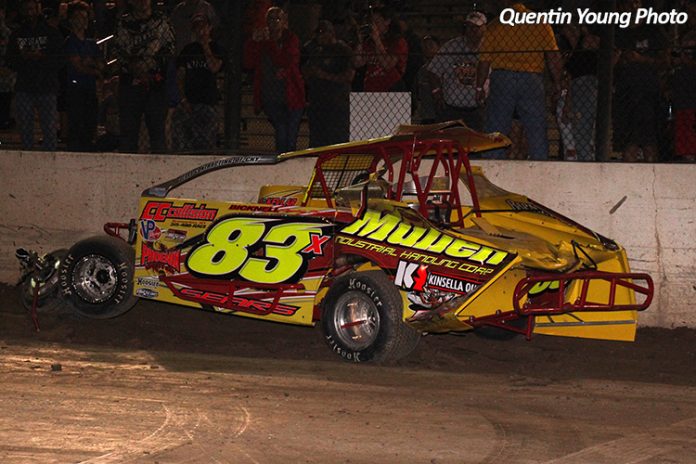 Sitting back for a few moments before packing a van to move Jon back to college tomorrow gave me time to look back to the last two nights of racing at Brewerton and Fulton. Friday there was more carnage at Brewerton than the trailer race that took place Saturday at Fulton.

The Modified feature was going well before the fast paced race was halted by a red flag to clear the cars that got tangled up in the front stretch. Other reports about the wreck have been published but from my perch atop the tower everything seemed to switch to slow motion as I began to observe the details of the “big one” as it unfolded. One car got turned sideways in the front stretch and set off a chain reaction pile up. When the mayhem stopped Robbie Bellenger’s car was at rest on top of the front of Katlyn Hile’s car and the rear of Tim Sears Jr.’s car almost under the flag stand. Pat Ward was facing traffic just beyond where Sears had slammed him trying to avoid further disaster.

Fortunately every driver walked away with only some soreness from the shock their bodies took during the wreck. Once the wreck was cleared a great race ensued that ended with Larry Wight in victory lane.

The first Sportsman race started off with Mike Fowler spinning mid pack in turn one sending everyone scrambling. Another big pileup eliminated several cars from competition as cars xommited to their lines piled into each other. Everyone really had no where to go to avoid the wreck. Again, and thankfully, there weren’t any reports of injuries.

Nick Krause raced his way to the front and eventual win in this feature, with Corey Barker racing from sixth to win the second Sportsman feature.

I left after that race because I had to get up bright and early Saturday for a men’s breakfast way down in Cuyler NY. After breakfast Jon and I took a trip to Syracuse for some business errands. I returned home for some lunch and relaxation with my wife before heading up the road to Fulton for Billy Whittaker night.

The competition was great in every class, but some stood out as the features ran off. The Late Model feature was one of the most exciting features at Fulton all year with a three way battle between Chris Fleming, Sean Beardsley, and Jason Parkhurst heating up. In the closing laps Fleming was running to bottom, Beardsley was high wide and handsome, and Parkhurst was trying to thread the needle. A little lane change and a Uke tire sent Parkhurst into Beardsley in turn two which gave Fleming an opportunity to grab the lead. Beardsley raced the highside to regain the lead and take the checkered flag, but he came up light after three attempts on the scales which gave to win to Fleming.

Todd Root was fielding a new chassis in the modified division that seemed to be what he was missing this year after moving up from a very successful Sportsman season last year. From the green to the checkered Todd led without any cautions slowing the pace to claim the first Tracey Road Equipment 358 Modified win of his career at the high banks.

Dorian Wahdan must have been watching because he dominated the first Sportsman feature in like manner to earn his first SUNY Canton Sportsman career feature win. Alan Fink raced from mid pack to win the second Sportsman feature.

The first E&V Energy Novice Sportsman winner was also a first time winner at Fulton. Scott Mallette is Brian Murphy’s brother in law and just started racing about a month ago. The highlight of the night for many was the shear elation that Kierra Backus displayed after earning her first win in the Novice Sportsman division in the second Novice feature.

I couldn’t stay for the trailer race because, well, I’m a Pastor and get to lead a church service every Sunday. I went home to get some sleep to be fresh and clear to hear God’s voice for that task. I took Sunday night off to prepare and pack up Jon’s things before we leave on Monday morning to take him back to college. I won’t be back until late Friday as my wife and I meander home on a vacationing road trip so I won’t be back at the races until next Saturday.

All of the first time wins I saw and the excitement of the drivers that earned them Saturday was shared by Brad Sweet in Knoxville Iowa as He wheeled his NAPA Autoparts Sprint Car to win his first ever Knoxville Nationals. Championship.

In every case, no matter whether it was the first career win of a driver, a first win in a new division, or a national level win, the excitement of the win couldn’t be contained by the winner. Verbal and physical expressions of the sheer emotions each racer felt in victory lane are a testament to their commitment to succeed, and an expression of their passion to do so.

I’ve seen that same raw emotion in church services and evangelical meetings when the Holy Spirit brings someone face to face with Jesus Christ and reveals His victory over sin and death to them. A victory is a victory no matter whether it’s in a sporting event or a personal spiritual encounter with the King of kings and Lord of lords. You just have to be in the right place at the right time.

There comes a time in every person’s life that requires them to make a single life changing choice. We’ve all been given, or will be given, the opportunity to make this choice. Choosing wisely will forever change you.

“When He came to the place, He said to them, “Pray that you may not enter into temptation.” And He was withdrawn from them about a stone’s throw, and He knelt down and prayed, saying, “Father, if it is Your will, take this cup away from Me; nevertheless not My will, but Yours, be done.” (Luke 22:40-42 NKJV)”

Before Jesus could die on the cross for our redemption He had to die to Himself, surrendering His own will to the will of the Father. If Jesus had chosen another path for His life, say, His friends over His Father’s desires, we’d all be condemned to eternal torment.

Before Jesus could be raised from the dead He had to be willing to die three times. Jesus had to die to His own will, and allow the Father to pour out His wrath which was reserved for the unredeemed on Him. Jesus had to die within His soul to do so. Jesus had to die a physical death by allowing the Romans and Jews to completely mutilate Him beyond recognition. The last death Jesus experienced was being forsaken by His Father as the shame and guilt of our sins were poured into His heart on the cross, until Father had seen Him suffer for us long enough. Then, and only then, could Jesus offer up His spirit in death while crying out with a loud voice “TETELESTAI”, which means “THE DEBT IS PAID IN FULL! He could have gone another way. He could have just refused to obey. He could have chosen to walk away from “the place”, but He didn’t.

I’m so glad He stayed, prayed, and obeyed. Aren’t you? Our time is running out to enter “the place”. God’s grace is a gift that secures you in His Kingdom for all time. It’s still available for a short time until Jesus Christ returns for His Church. He’s calling you to that place. He’s asking you to decide. Are you bold enough to enter? Are you humble enough to pray “Father, not my will, but Your will be done in my life?” Are you sincere enough to obey? There is no other way. You have to go to “the place”, stand face to face with God, and choose.

He’s set before you (eternal) life and (spiritual) death. Choose life. Jesus did.

Before He arose from His conversation with the Father, the Father sent angels to strengthen Him for the journey to His cross. He’ll do the same for you if you’re bold enough to take up your cross and follow Him. His disciples followed Him to “the place” choosing life for themselves. Won’t you?

I pray the Holy Spirit reveals the love and grace of God the Father to you in the knowledge of what Jesus Christ accomplished on the cross to win our victory. I also pray you choose Him as your Lord, receive Him as Your savior, and walk in the fullness of the Holy Spirit as you run the race of life. We’re here to help with that every step of the way. We can be reached at Finish Line Chaplain or Kevin Westcott Ministries on Facebook, or via email at flchaplain@windstream.net.

Have a blessed week, I’ll see y’all as soon as the wheels lead me home.