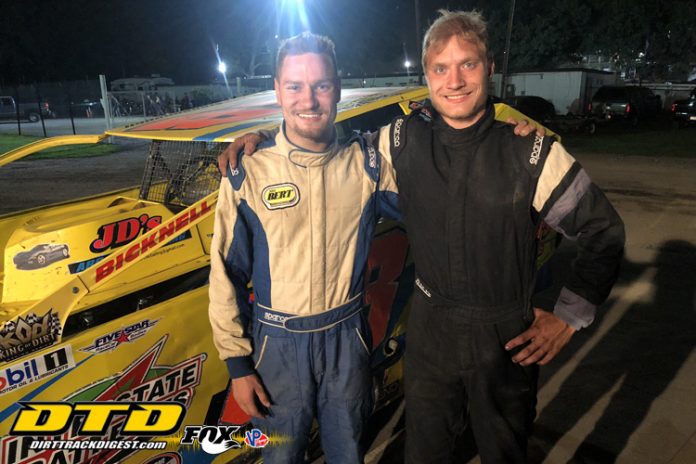 There is no way of knowing, each Friday, what the trip to Albany-Saratoga will bring besides great racing and great food. As we enter the pits our first stop is usually the lineup board. This week we noticed someone who looked very familiar, it was Butch Jelley’s daughter, Lisa and next to her was someone sitting on the wall near Victory Lane, Butch Jelley was sitting near a place he had visited many times; maybe not the Victory Lane of today at Albany-Saratoga but he visited victory lane at area tracks many times during his career. Butch is closing in on 80 years old and is one of the former hero’s for many local racing fans, including Ed. Ed has watched Butch race and win for many years and when he sits with veterans of our sport is often in awe of their stories. Butch Jelley started racing in 1957 and in 1960 he was rookie of the year at Lebanon Valley. He has won races in six different decades and is a member of multiple Hall of Fames; Lebanon Valley, Northeast Dirt Modified Hall of Fame and the New York State Stock Car Association Hall of Fame. Butch won 31 races at Lebanon Valley, three at Albany Saratoga and was track championship at Devil’s Bowl in 1975 where he also has 14 wins.

On Friday Albany Saratoga provided Butch and Lisa with a golf cart to get around the pits to meet some of the competitors he once raced door to door with. His first stop was at the Stratton pit area and Butch’s first question to Hector was which car is for me? Hector’s response, “anyone you want”. Butch’s daughter has not been around the races as she once was and we thank her for bringing Butch to one of his former racing venues. Thanks for the memories, Butch.

Our next stop was the Scarborough pit to talk with Joey and Jake who had a great run a week ago at Devil’s Bowl Speedway in the Sportsman Modified division. Joey won the event beating Billy Lussier, Jake was third followed by Tim LaDuc, Jimmy Ryan and Kenny Tremont. Both of these young men are coming into their own at 21 years old. They have spent the time and learned from those around them including their father, Don who drove the familiar No. 11 at the tracks where Joey and Jake compete today. In talking with both young men we found they are well spoken and have manners both on and off the track. Something that is very important if they plan on making this a career. We salute their parents for giving them a foundation to stand on and work from.

We always try not to miss any improvements to tracks we attend and on Friday we noticed a brand new garage next to the scale area; a enclosed area for teching the cars. Also new is the paved area leading to the pit concession stand. And just in case you wonder why this track has become a showplace of area racing, we saw promoter Lyle Devore reach down and pick up trash while talking with a group of fans.

In looking at Ed’s list of 40 tracks he keeps driver wins for there have been 384 events at the 40 different tracks and 111 weather related cancellations. As of August 10th there are five drivers with double digit wins, Matt Sheppard (24), Stewart Friesen (16), Mat Williamson (12), Anthony Perrego (11) and Craig VonDohren (10). This includes both 358 Mods and Big Block Mods.

Looking at “The Jack” and looking back at Jack Johnson’s record at Fonda Speedway, he had 149 Modified feature wins. Of course someone had to be in the runner-up spot on several occasions and here are the top few-Dave Lape finished second to Jack, 24 times; C.D. Coville, 16 times; Mike Romano, 12 times; Ray Dalmatta and Lou Lazzaro each with nine times. There was a total of 43 different drivers that finished second to Jack at Fonda during his career. And there is a possibility of six of them being in “The Jack” race on Monday night, August 13th. They are Alan Johnson, Bobby Varin and Ronnie Johnson who all finished second to Jack four times. Pat Ward, three times, Billy Pauch, two times and Danny Johnson, once.

Rescheduled from its original date, Nostalgia Night is this Friday at Albany-Saratoga and according to Chris Grady of Grady Vintage Photos, ten veteran drivers have committed to coming to sign autographs; Jack Cottrell, Dave Leckonby, Andy Romano, Brian Ross, John Kollar, Bob Hackel, George Proctor, Mert Hulbert, Wes Moody and Win Slavin. This is a must see event for all fans including special display cars, commemorative poster and just a really good chance to reminisce or take a step back into the history of racing in the Capital District.

With cooperation from Mother Nature this week will be the first we can remember, “Capital District Speed Week”. We’ve already mentioned “The Jack” on Monday, August 13th at Fonda, Tuesday, August 14h, Stampede at Toga at Albany Saratoga, Wednesday, August 15th, The Grand Daddy 602 Sportsman World Championship at Fonda, Thursday rest up because Friday, August 17th is Nostalgia Night at Albany Saratoga, Saturday, August 18th, Final night of points at Fonda and they will crown their 2018 champions then on Sunday, August 19th, The Ridge hosts Big and Small Block Modifieds for the Aftershock event and their Hall of Fame ceremony. Also on Sunday, August 19th Tony Stewart brings his All Star Circuit of Champions Sprints to the high banks of Lebanon Valley.

At The Ridge on Sunday, we spoke with Tim Hartman, Jr. one of the winning drivers in the Crate Modifieds at the track. Tim said he will be behind the wheel of the Jim Becker No. 9, MidTel sponsored Modified on Tuesday for the Brett Deyo Short Track Super Series, “Stampede at Toga” at Albany Saratoga and his smile certainly showed how happy he was about the opportunity. We spoke with Jim Becker and he said he has hand limited seat time this season and thought it would be a great time to give Tim a chance he richly deserves. Our sport has many of these stories but we don’t always hear about them. On Facebook Cody Bleau thanked Laudy Hoyenga for giving him the chance to race in “The Jack” on Monday at Fonda. We wish both racers well in both events.

The winged karts came 24 strong to The Ridge on Sunday and put on some great racing for the fans. The group is headed by Tommy Varin, Bobby’s brother.