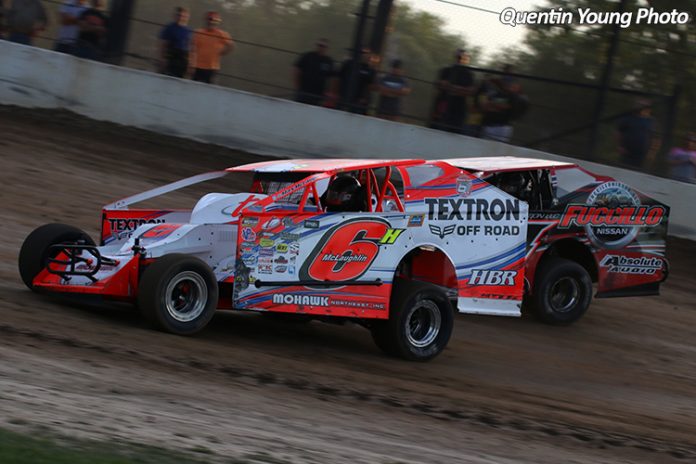 Coming back from a vacation to begin another work week is inevitable, but looking back on a great week of restful road trips makes it easier. I have to correct myself for the error I made reporting the Modified winner at Brewerton Speedway on August 10th. “Mad Max” McLaughlin earned the win and deserves the credit.

From the 12th to now I haven’t been at a racetrack, but that doesn’t mean that I haven’t interacted with racing. We drove Jon back to college last week taking our time along the 1320 mile road to his campus. We took the afternoon off when we arrived in Tulsa to just chillax. Jon and I went to the campus to register him, and ended up hanging out with several of his friends for over 4 hours. I got to meet some other parents, also ministers, who confirmed many things I’ve received from the Lord in prayer.

After the “move in” Wednesday we ran some errands, where we ran into more of his college friends. Between lunch, shopping, and resting before taking Jon and a few of his friends out to dinner a few haulers were lining up in our hotel parking lot. When my wife and I were heading over to campus to pick Jon and his friends up I saw someone opening up the side door of a stacker. Driving by I saw fuel jugs filled with methanol so I stopped to meet the guy. As it turned out he and the other teams staying at the Crowne Plaza we stayed at were racing about an hour and a half west of Tulsa last Thursday night. They were teams who race USAC 360 wingless Sprint Cars.

After making a quick acquaintance and offering a few encouraging words I had to leave to keep our student contingency fed. If you’re ever out west I recommend you try out Rib Crib. The food was reasonably priced and tasted home made. Braum’s ice cream for desert satified our pallets before taking the “boys” back to campus and saying our goodbyes.


We left Tulsa Thursday morning for Indianapolis. We met with my nephew and his family there and enjoyed a nice dinner. My nephew spent a year working in the carbon fiber amd cnc shop that former Oswego Speedway regular Jeff West owns. Joey Saldana and my nephew have sons that have played on sports teams together. After spending the night near Indianapolis we started for home Friday morning. Heavy rain in southern Ohio along with a few accidents in Columbus and Buffalo slowed us down so I wasn’t home early enough to attend the Arctic Cat All Stars Sprint Series at Utica Rome. I got the text alert that Brewerton had rained out but also eventually saw that Utica Rome had to pull the plug on Friday’s show as well.

Saturday morning I returned the rental vehicle we used on the trip and returned home to freshen up before heading to the Amber Cemetary on Otisco Lake. It was an honor to inter the earthly remains of one of the first women I met in the sport of auto racing. Jane Doust spent years working for DIRT Motorpsorts directly under Glenn Donnelly. My first year as a Finish Line Chaplain she was my main contact for credentials and other important information related to the events I covered. Her son Greg was racing Sportsman while starting his family back then. Greg returned to the driver’s seat this year in the Crate Sportsman division running Fulton Speedway weekly. When his dad Bob asked me if I could perform this service for them I didn’t have to think about it. Its the least I could do for a family that races, Jane’s earlier involvement in my younger years not withstanding. It was great to see family, friends, and racers show up to honor Jane and love on her family. When I started out to the cemetery my left front brake went metal to metal so I had to baby the car to and from the service. I picked up some rotors and pads on my way home and did a front brake job instead of attending Fulton Speedway that night. Safety first.

Sunday I was back behind my pulpit at Lincklaen Community Church and finished my last hours of my vacation afterward in a recliner with an iced coffee, some good eats, and Jesus. I can’t wait to be back at the tracks this weekend. I’ve missed some crazy action by what I read online.

My recent series I’ve been teaching at my church about the Holy Spirit is building and I’m beginning to see evidence of His presence intensifying each week. One woman had considering staying home last Sunday because she wasn’t feeling well, but just by sitting in His presence in service she was made well and stayed after to enjoy some food and fellowship.

God once told the Israelites that He was “the Lord who heals you” (Exodus 15:26).

Jesus Christ is the embodiment of God the Father. “For in Him dwells all the fullness of the Godhead bodily; Colossians 2:9 NKJV”

Everywhere Jesus went He had compassion on people and “He healed them all” (Matthew 12:15).

God is unchanging. His methods may change, His delivery varies, but He remains the same.

Since the ascension of Jesus Christ took place He has been seated at the right hand of the Father. He sent Holy Spirit to earth to continue doing the will of the Father by taking everything He gave the Son to manifest it on earth to His Church.

In John’s Gospel in chapter 14 Jesus began introducing Holy Spirit to His disciples. In verses 15-17 Jesus calls Holy Spirit the Helper. This title is translated from the Greek word Parakletos, which means one identical to, and also one who comes along side of to help, an Advocate. Holy Spirit proceeds from the Father, and was sent by Jesus. He’s identical to Jesus in every way, possessing all of God’s nature, and character.

That’s great because that means God the Holy Spirit who dwells among us, and in us who believe, is still the same God who declared to Moses that He is a healer. The same Spirit that anointed Jesus of Nazareth to perform miracles is the same Holy Spirit at work in the church today. His yearning to perform among us is only limited by our ability to receive Him, and allow Him to be Himself in and through us.

I’ve seen many miracles of the healing kind throughout the years I’ve known the Lord. I believe we’re on the cusp of an outpouring of the Holy Spirit on our nation’s churches that will spill over into our society in such a powerful way that what Jesus said about the work of the Holy Spirit in John 16:14-15 will be commonplace. Are you ready?

We’re always here to encourage and serve you however we can. Let us know by contacting us in Facebook at Finish Line Chaplain, Kevin Westcott Ministries, or by email at flchaplain@windstream.net