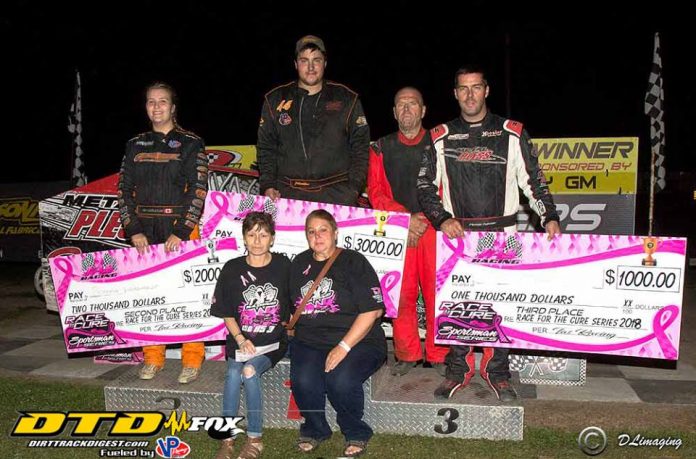 Cornwall Motor Speedway hosted the final round of “The Race For Cure series” on Sunday, August 19, 2018. The enthusiastic crowd saw the crowning of this year Champion Johnathon Ferguson.

Ferguson went into Sundays 100-Lap race just one point behind Brianna Ladouceur of Cornwall Ontario in the 15B car. It was an eventful-filled race from the drop of the green flag. Johnathon, who started on the pole, raced a side-by-side battle with Martin Pelletier, for a good portion of the race, with Shane Pecore charging hard to catch the two front-runners.

In the background, Brianna Ladouceur and Kurtis Cayer were racing hard for fourth place. Cayer would take advantage of traffic and get ahead of Ladouceur later moving into third place as Pecore ended his night during a mishape with Mike Stacey in the 23 car.


In the end, Pelletier would cross the line first taking home the win with Ferguson coming home second followed by Kurtis Cayer in third. The second place finish for Johnathon would give him the points needed to take home the series Championship.

This is the second time for the Prescott, Ontario, native has won the Race For Cure Championship. Johnathon won the title last season in a much different fashion compared to this year.

“It was a tough race tonight and a tough series all-around,” explained Elizabeth Ferguson Johnathon mother and team manager. “We came into tonight’s race one point behind Brianna but in the end, we came home with the series title.  It was a great battle with Brianna and She still having an awesome Season.”

This year, the Race for Cure Foundation, which currently works closely with a cancer specialist at the Cornwall General Hospital, will be helping two recipients. The Foundation managed by Steve Morris and his wife, who donate their time; work closely with the hospital to help patients who have physical along with financial hardship due to their illness.

“This season, Cornwall Speedway has raised over $7,000 to this worthy cause,” Raymond Lavergne explained. “Steve approached me in early 2015 with his idea and I was committed to helping with his cause. It has been very successful so far and I am sure it will continue to grow in the coming years,” he explained.

Steve and Wendy Morris along with Cornwall Speedway managed to raise a total of $10.000 for this worthy cause. This year’s receptions Samantha Marshall and Linda Sauvé were each presented a cheque for $5.000 during the victory lane ceremony in the hope of helping them during this difficult time in their lives. In addition, Brianna Ladouceur also donated $1.000 dollars of here winnings to this cause bringing the total funds raised to $11.000. This year’s Race For Cure series was the most successful to date.

If you would like to help out with this worthy cause, donations can be made by contacting Steve Morris