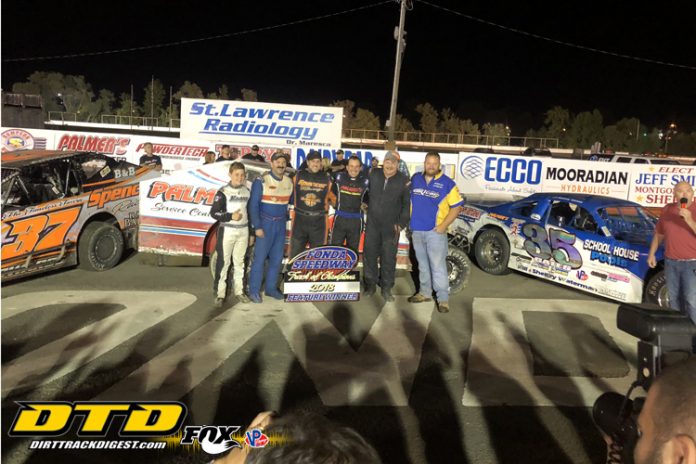 So much for Capital District Speed Week; on Monday we lost “The Jack” race at Fonda for the second time. The race is now scheduled for September after the Fonda Fair. On Tuesday, Brett Deyo’s show was cancelled at Albany-Saratoga and moved to Wednesday causing it to go head to head with Fonda Speedway’s “Grand Daddy” 602 Sportsman World Championship. Well, if this was a card game we don’t know who won.

We had not attended a race at Fonda in over a year but when we heard that Tom and Sharon Spencer were presenting the event in memory of Brian Hanaburgh we knew where we had to be. Brian Hanaburgh sponsored the annual McDonald’s Weekend for many years in addition to founding the Fonda Speedway Museum that was first put inside the local McDonald’s Restaurant in Fultonville. The Fultonville stop for many race fans was just one of the several McDonald’s owned by Hanaburgh in the area. Tommy Spencer has been involved in area racing for many years and McDonald’s brought us some great 200 Weekends at the Track of Champions and on Wednesday both the Spencer’s and McDonald’s were once again in the sponsorship role at Fonda. It was great to be with our friends from McDonald’s who we worked with when we were curators of the Fonda Museum.

Three short months ago we lost the former owner of McDonald’s restaurants, Brian Hanaburgh and we had the chance to share photos of those great weekends and memories of Brian and his time at Fonda Speedway. For us this was more that just a race. Many people came together to sponsor the night to honor Brian and the racers came away with plenty of extra money. The event paid money for heats and all 50 laps laps. The checks for the top three were $2000 going to winner Adam McAuliffe, $1000 going to Chad Edwards and $800 going to third place Brian Calabrese. Along with the Grand Daddy 602 Sportsman event on Wednesday the 358 Modifieds were also on the card and due to some last minute issue it turned out not to be a KOD event. Fonda promoter, Pete Demitraszek decided that the show would go on and with a limited number of 358 Mod’s in the pit, he spoke with the drivers and came to a mutual agreement to cut down the number of laps in the event and the purse. Although the field of cars was limited to ten, the race turned out to be a good one, starting with Demetrious Drellos on the pole in his No. 111 racer with a special paint scheme. Younger fans may not have related to the look of the car but for some of us it brought back the time when Fonda earned the title the “Track of Champions”. The original paint scheme was on a car owned by Demetrious’s grandfather and was driven by the three gentlemen listed on the rear of the quarter panel of his car on Wednesday, three Hall of Famers, Kenny Shoemaker, Pete Corey and Paul Marshall. We have been watching Demetrious for a few years now and after watching him battle it out with multi-time track champion, Bobby Varin we decided that maybe his driving style is a combination of all three of these drivers of the past. We thank the team for their effort.

That was not all that made the event special. Bobby Varin was able to get past Drellos in the waning laps of the event and take the checker and while being interviewed after the win, took the opportunity to announce that he along with his owners Alton and Carole Palmer would donate their winnings to fellow racer, Allison Ricci and the Miles of Hope for Breast Cancer organization that she has supported and collected for the past couple of years. Allison and her No. 55 358 Modified was pushed to victory lane with a blown engine to accept the $1000 donation from Varin and the Palmers. We learned later that the team had decide prior to racing that night that they would donate whatever they won to Allison and the organization. This is the type of kindness and generosity that makes our sport so special. We thank Alton, Carole and Bobby for this generous donation and Allison for bringing this important cause to the attention of so many.

Friday Ed made the trip to Albany Saratoga and by the time he arrived he knew it might be a short night. Everyone was told the show would start early and would be features only format. Well, the best laid plans don’t always work out and after a three features the skies opened up and lit up with lightening and the show was called. Chad Edwards won the Sportsman feature and when asked what he thought of the features only program he said, “If I end up in victory lane, I like it very much.” The Nostalgia Night has been moved to this Friday, August 24th and double features for Modifieds. Saturday was championship night at Fonda and the traditional Night of Features.
Bobby Varin and the Palmer team of Howes Cave won the Modified Championship, the first Modified title for the team with Varin in the seat and the seventh championship for Varin, tying him for Fonda titles with Dave Lape. Varin was presented with a Fonda Speedway 2018 Modified placard by painter, Gary Keller while three of his dedicated young fans received miniature versions to have him sign. With him are Chloe, Sidney and Cadence Carpenter.

Crowned Sportsman champion was, Chad Edwards in the Tommy Spencer owned car, Kenny Gates became Pro Stock champion for the seventh time in his career at the track. Johnny Young repeated by winning the Street Stock title again this season and Derrick McGrew, Jr. became the youngest track champion in the history of the track in the Limited Sportsman division his first title in a stock car. McGrew, Jr. is eleven and said his dad had set a goal for them this season, to finish every race and keep the car clean. The crowning of the champions was not the only thing that made the night special, four drivers also recorded their first career wins at the track, Rocky Warner in Modifieds,
Charlie Tibbits in Sportsman, Michael Wagner Fitzgerald in Limited Sportsman and Michael Arnold in Street Stocks. Josh Coonradt was the winner in Pro Stocks. With his win on Saturday, Rocky Warner now has wins in every division that races at Fonda. With Lebanon Valley canceling due to heavy rain, several invaders made their way to Fonda on Saturday, reminiscent of something that used to happen back in the earlier days of racing in the area. One of the Street Stock invaders was Zach Sorrentino from Lee, Massachusetts. Zach currently sits ninth in Lebanon Valley points and with the past two week rainouts has made the trip with his father, Pete, to Fonda where he finished second last week and fifth this week. We also found that Zach has a win in the class. Where did we find this, from one of the several record sheets given to us by Ron Szczerba, Fonda’s press release writer and statistician. Zach Sorrentino is in the Marine Reserves, works as a Facilities Manager at a luxury resort in Lenox, Mass. It’s great to have the Valley invaders make the trip when the chance arises. Congratulations to Bobby Varin’s father, Robert on his recent birthday and the very special way he celebrated it. Bob and his son Bobby, daughter, Dana and grandson, Danny all went skydiving to celebrate.

It was on to Glen Ridge on Sunday for the special Big Block/Small Block Modified Aftershock event on Sunday. The event played to beautiful weather and an huge crowd with 108 cars in the pits. Mike Mahaney was one of those traveling to The Ridge on Sunday for the special event and there he met his cousin Joe Smith who drives a Sr. Slingshot at the track weekly. We snapped this shot as Mike was with Joe helping him with his set up for The Ridge.

Bobby Varin and the Palmer team was the winner of the Aftershock event at Glen Ridge on Sunday night. Varin shared the podium with Mike Ricci and Danny Tyler. This past Saturday racing lost one of it’s most popular and interesting personalities when photographer, John Grady lost his battle with dementia. RIP John.