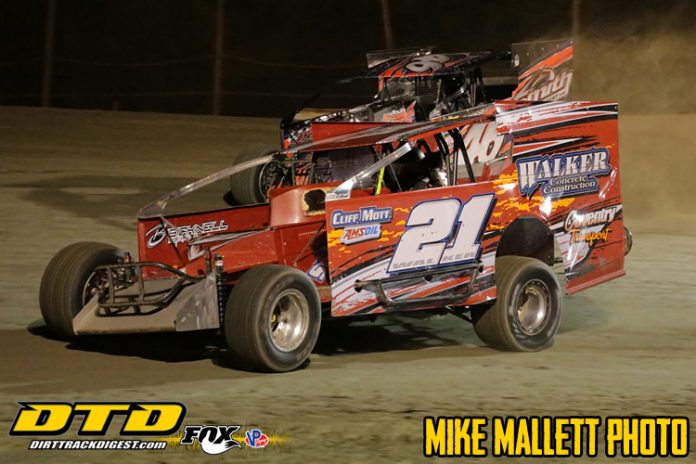 Shaun Walker has made the most out of his three appearances at the Thunder Mountain Speedway in 2018. The Masonville, N.Y., driver came into Saturday night with a second and a third. He left the night by finally getting finishing in the best position on the podium as he won the 35-lap affair. He didn’t think he was better than he’d been other times, but it was good enough to get the job done.

Prior to making the move to Thunder Mountain on Saturday night, Walker had been a mainstay at Five Mile Point Speedway this season. He made the tough decision to switch after falling out of the point standings. He is looking long term as Thunder Mountain has several high paying shows at the end of the season which he hopes to be ready for.

“Financially it makes more sense to race here,” commented Walker. “There was three races left down there and three here. We were too far out of it to get the championship and basically the only thing that pays is first. We were handicapped to the back there and we are handicapped to the back here. Here you can pass, down there it was tough going. We could get up to the top five every week, but that was as far as we could get. Then the next week you are starting in the back again.


“So the thought process is to see what we got. My goal would be to get in the top five at some of these big races at the end of the year. That was whole reason.”

Saturday night he was fortunate to win the race after starting in the 10th position. He was involved in numerous close calls at the beginning of the race. He narrowly missed a first lap pile-up before surviving a red flag situation. Late in the race he had his hands full with traffic.

“Right on the first lap I just about got caught in that one, it was inches,” he said. “There was a red flag when we were getting stopped and I almost got together with (Chance) Spoonhower in turn two. Lapped traffic they were three wide in front of me. I was like ‘what am I going to do?’ Of course you don’t know who is catching you and where they are going to go.”

Smith Works to Second From 12th

Jeremy Smith came into the night leading the points at Thunder Mountain and on Saturday he left adding to that lead. The Binghamton, N.Y., driver was solid in the feature, and like Walker, barely missed the opening lap incident to work his way to an eventual second place finish.

“We had a good car and needed some breaks,” cited Smith of his Bicknell. “There were a couple of wrecks right in front of me that I could have been right in the middle of it. I got lucky.”

Smith had one shot at Walker when the caution came out on lap 29. It was a six lap dash to the finish. Smith went to the top trying to find something to get around Walker. He just couldn’t find the grip that he was looking for on the high-side of the raceway.

“The top wasn’t as strong tonight, but he was on the bottom so I had to try to the top,” Smith mentioned about the battle with Walker. “I don’t think I could roll the middle good enough to make it work so I just went to the top. There was little bit of bite up there in spots.”

The runner-up finish added to an already successful 2018. Smith is a multi-time feature winner. He indicated that is a byproduct of putting a lot of effort toward Thunder Mountain in 2018.

“Jared and the guys have the car going real good right now,” commented Smith. “We don’t run this car anywhere else but Thunder so it doesn’t get anything changed on it. It stays here. We’ve been working really hard to get it going well here and hopefully we can finish the deal off next week.”

Decker Goes Back to Front

Billy Decker made an off night start at Thunder Mountain. The Unadilla, N.Y, driver started 21st on the grid with his Smith Racing No. 91 and powered his way to finish third in the final tally. He had to pass a lot of cars to make that podium finish happen. He made some early progress before getting into a jingle. From there he went to the back a second time before working his way up through the field again.

“I got into one of the wrecks and had to go to the back,” cited Decker. “Then we had a really good race car. I wasn’t quite as good on that last restart as I was before that and I don’t know why. Probably a tire deal. I had a good car.”

Part of the reason Decker was in town was to shake down his Bicknell car for the end of the season events. The Short Track Super Series North Region visits the track in September and Decker is currently the point leader. He was also hoping to improve his feel on the American Racer tires.

“This is a different engine and we wanted to try a couple things tonight,” he said. “We wanted to try this engine out. Everything seemed to work quite well. Hopefully we can build from it a little bit.

“I haven’t found a feel that I like yet on the American Racers. We did quite well on them a few years ago. We won the RoC Series and were going pretty good then we just lost the handle and haven’t got it back yet.”

Eldon Payne Jr., was a late arrival to the show on Saturday. He missed his heat, but was able to start the feature…

Chad Cook got upside down in the feature after contact with Jeff Sheely. He was uninjured in the crash…