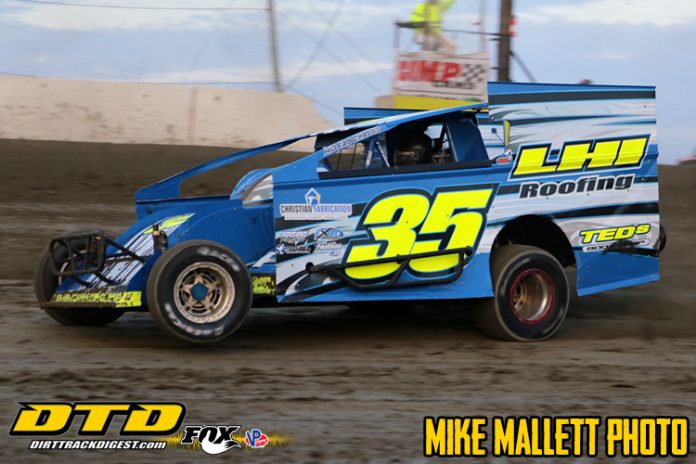 Alan Barker is a championship contender. The Norwich, N.Y., driver is the mix for the Thunder Mountain Speedway title which will come down to the wire next Saturday night. This past week Barker lost a few points to leader Jeremy Smith, but things could have been a lot worse after he was involved in an early race incident. He rebounded to come home with a top five.

“It turned out to be a pretty good night,” commented Barker. “We got bounced around a bit there on the start. We were in the wrong place at the wrong time. We were able to roll away with little to no damage. We got lucky there. We continued on, passed a lot of cars and had some fun.”

As far as Thunder Mountain goes, it’s been a season of fun for Barker. He’s driven his No. 35 HigFab mount to victory lane on multiple occasions. The team has hit on something that just seems to work. That’s what has put him in position to be in contention for the title.

“I teamed up with Cory Pike last year and we bought a HigFab Chassis,” cited Barker. “Last year we had a big-block to put in it, but it just wasn’t the right combination for this place. The straightaways are too short and I’m not very good in a big-block. This year we teamed the HigFab Chassis up with a good small-block thanks to LHI Roofing and it’s really worked well. It’s run well here. It has a lot of bottom end torque in it. It carries us to the front it seems like every week.”

The multiple victories he has on the Mountain this year have helped him nearly match current point leader Smith. Saturday night Smith ended up in the runner-up position while Barker had to settle for a fourth place finish. He remains in the hunt as he came into the night only seven points back. Although a few more points have been added, Barker has a legitimate shot at the title.

“I try not worry about the points too much,” mentioned Barker. “Obviously at this point, with one race left, we are in contention. We are within 10 points or a few more after tonight. I started paying attention to it. I try to not let it affect my attitude as far as at the track. At the end of the day I’m still going to get up Monday morning and go to work. We do this for fun, all of us here. This is our entertainment and what makes getting up Monday morning worthwhile.”

After the action concluded on Saturday night, Barker had his No. B16 in the pit area to turn some laps. Barker was hoping to work out the kinks with his big-block car as he hopes to hit some late season events with the Super DIRTcar Series including the Labor Day Double-Play 100 at Weedsport Speedway. He’s made four starts with the series already in 2018.

“We are trying to get experience with the Hoosiers and the windows,” said Barker. “Obviously the Super DIRTcar Series is the cream of the crop in the Northeast and it is very tough up there. Running with those guys, we’ve been competitive at Thunder Mountain this year but we go up to those shows and put the windows on and put the big-block and Hoosiers on it.  It is a totally different game. I got to learn it all over again.”

Barker was honest about the big-block deal. In those four starts on the series he has yet to crack the top 10 in the finishing order. He’s figured out the small-block, but the big-block has given him some trouble.

“We’ve had a couple shows where we don’t qualify well, but we do race pretty well,” stated Barker. “We’ve been battling some issues that I don’t think is quite right with the car. We are trying some stuff tonight.  The big-block has more the weight and that throws my entrances off. That and the Hoosier Tires. I don’t get good front end response versus the American Racers. That combined with a 200 pound heavier motor, I struggle getting the car from entrance to apex. If I can get it into the corner I have absolutely nothing off. I can’t get a happy medium, but we’ll keep working on it.”

With that said, this should be a busy weekend for Barker as he not only goes for the title at Thunder Mountain, but he’ll be looking to change his fortunes with the Super DIRTcar Series as well.