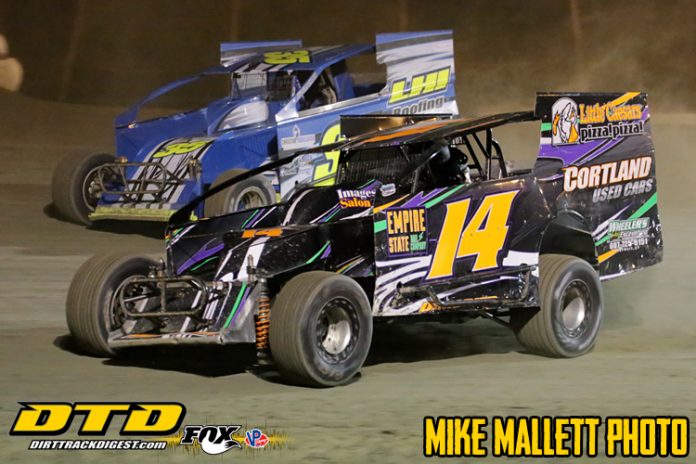 Kailee Dimorier was a surprise front runner on Saturday night at the Thunder Mountain Speedway. The 22-year-old rookie Modified driver from McGraw, N.Y., was in the mix for the feature win up until the very end of the 35-lap main-event. Dimorier led the entire first half of the race before giving way to veteran driver Shaun Walker. She eventually fell back to fifth, but she mixed up with the best. She make a few mistakes that cost her some spots. That opened the door for the likes of Jeremy Smith, Decker and Alan Barker all to get by.

“I slipped up a little bit on the bottom and kind of got excited I guess,” she said with a smile. “Shaun Walker’s fast, Jeremy Smith is always fast, Billy Decker, is Billy Decker. I’m happy with top five.”


Dimorier who began her career in the Xcel Modified division, which she ran few a handful of years, before making the jump into the crate Sportsman division. That was a two year deal before she finally made the move into the Modified division this season. So far she’s holding her own with Saturday being a high point for her.

“We’ve done pretty well,” stated Dimorier. “We are ninth in points right now. We are doing okay. We’ve obviously had some bad weekends and what not. We’ve finished fourth a few times. Tonight was just awesome because of who I finished with, really big names up there. It is definitely a high point of the season.”

It’s been a learning season for sure, but she’s continued to improve as the season has progressed. As is the case with any new driver, it’s all about seat time.

“It’s definitely been a big learning curve for me,” she said. “It’s a lot more power, which can be good or bad. It’s been fun for me. I think it fits my driving style a little bit better. We are slowly and surely getting it with the adjustments that need to be made and how you drive on different tracks. We are getting there, but we are still learning.”

Saturday’s performance definitely shows that she is right when she says she is getting there. She held her own with some of the best. A podium finish and who knows, even a win, may be right around the corner for this up and comer.