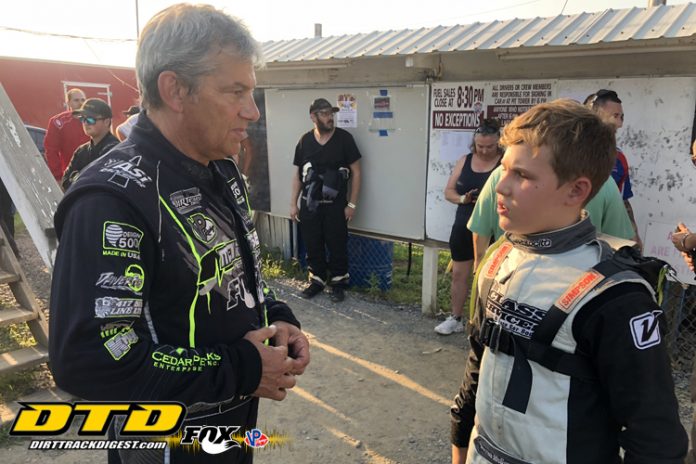 After a week of schedule conflicts and rainouts our racing somehow survived and we were treated to a weekend of outstanding weather and some great racing. On Friday evening at Albany-Saratoga the twice rain delayed Nostalgia Night was reality. The event was the brain child of Chris Grady. At times we look at the way something falls in place and Friday night was just such an event. On the previous Sunday we received the sad news that a great friend of racing was called home to the big track. Chris’s dad, John Grady passed away on Saturday, August 18th and as it turned out the event looked like it was a giant service in memory of John Grady. The drivers came and so did the fans and all had stories of buying photos or just talking with John. Two large tents were set up to display thousands of photos, an autograph table included drivers signing autographs on a special Nostalgia Night poster. The stories that were shared under the tents were priceless, the memories of days gone by. Just a few of the veteran drivers in attendance were George Proctor, Winn Slavin, Wes Moody, Bob Hackel, and Brian Ross. One other driver that stopped by to honor his special friend was C. D. Coville. When we look at this first time special event all we can say is thank you to Chris Grady and Albany Saratoga. One beautiful tribute to John was the painting that Chris had done to honor his dad by artist Al DiMauro. As race fans stopped to admire the art work it was hard to tell if they were saying good bye to a great friend or just admiring the painting. One of the things that brought John and Ed closer together was their connection to AA, John a member for 70 years and Ed over 44 years. It was a connection that added to a very long friendship and both have a special prayer to guide them, the Serenity Prayer. Farewell friend, until we meet again. In talking with Chris he said this event was just the first and next year will be even bigger. Well done Chris, your parents are proud of you. At the driver’s meeting on Friday we snapped this photo of Brett Hearn talking with Derrick McGrew, Jr. Brett won his first race some 42 years ago and Derrick Jr. is in his first season behind the wheel of a stock car. We can only guess who was giving who advice. A great thing about our sport is how the drivers get along off the racing surface. We also snapped this photo of Kenny Tremont, Jr., Jack Lehner and Bodie Bellinger, three gentlemen who were about to entertain the mass of fans who were in attendance on Friday night. Out next stop in the pits was at the car No. 2 Modified of Jack Lehner. Jack is a first year Modified driver who is coming into his own and improving each week. Jack started in go karts at five years old then moved to Limited Sportsman where he won some features before moving to 602 Sportsman before trying his hand at the 358 Modified division. Once he raced with some of the veteran drivers the team decided to move up to the headline division. Jack says he loves to compete with the best. In a short time Jack has proven the move was the right one, in 2018 he already has two top five’s. It appears that Jack has put much thought into his racing and it shows in his progress. It’s great to see someone use wise decisions to guide their career. Jack is 19 years old and attends Siena College.

The two Modified features at Albany Saratoga were worth the price of admission. Kenny Tremont, Jr. has had an up and down season but he had an up night on Friday winning the rescheduled 32 lap event in memory of Lyle’s father, Stan and took home $3200. In the regular feature he looked to have another win but no one told Marc Johnson; he decided one feature per night was enough for Tremont and took the lead away with five laps to go and held off the No. 115 on the way to the checker.

Saturday was the final night of points for Modifieds at Lebanon Valley so we decided to make the trip wondering if history might be made but when all was said and done, Brett Hearn was on top of the points and Keith Flach stood in victory lane having passed leader Eddie Marshall by a nose at the checker. Lebanon Valley has many dedicated racers who come to the track each week for a chance at taking the checker. John Ruchel and his No. 7 Modified is in the pits at The Valley each week as one of those dedicated racers. Not only is John dedicated his whole family is with him each week and on Saturday they got to celebrate his heat win with him. John’s best finish to date came on September 2nd of 2017 when he finished second to the ageless Denny Soltis. John said although he would have like to win, he was not unhappy because it was his career high. On his bucket list right now is to qualify for the upcoming Mr. Dirt Track USA this Saturday, September 1st. John began his racing career in the Street Stock division behind the wheel of a 1971 Barracuda after sitting in the stands at the track as a child and dreaming of racing on the high banks. He has been coming to the track for 30 years and said at first it was all about drinking beer and having fun after the races but as he has gotten older he now treasures the trips to The Valley each week where he can get together with family and friends and talk over what is going on in their lives. John makes a living as Highway Superintendent for the Town of Kinderhook and works a second job as a property caretaker to support his racing. He says on a good night it cost him $500 to come to the track and that’s just fuel and tires. He gets help from many of the other teams, Mike King, Flach’s and Tremont’s and Dan Bedell recently straighten out his motor problems. John is thankful to anyone and all who help him and says that he would love to win but if he never gets the win he is just thrilled to be able to race with his fellow competitors and be part of racing on the high banks. Sunday it was off to the N.E.S.C.O.T. Steak Roast at the Nassau Sportsman Club, another day of nostalgia and reminiscing. What a great turn out and a delicious meal or should we say meals, we enjoyed both lunch and dinner before leaving. Drivers in attendance included both veteran and active competitors, the active ones soaking up veteran knowledge or maybe trying to explain to the veterans how things have changed in racing and some things remain the same. We know what type of efforts goes into putting one of these events on because we were there once and out of the “blue” was a familiar face, Mark Krosky (Krash Mender) who turned out to be an ambassador for the group, dress in blue, including the huge cast on his leg. Krash recently broke his leg and will be scooting around for the next month or longer. Rich Carpinello was another of the N.E.S.C.O.T. dedicated officers busy making sure things went as planned. There were raffles, 50/50’s, antique race cars, and music and food for the enjoyment of all that attended. We snapped a shot of veteran driver, Joe Messina alongside the No. 115 owned and restored by Dan Wood.